On This Day In F1 – Indianapolis Hosted The US GP For The First Time – WTF1
Skip to content
×
Formula 1 , On This Day

1972 Canadian Grand Prix
Jackie Stewart eased to his third win of the season for Tyrrell, beating McLaren’s Peter Revson by almost 50 seconds. Newly-crowned champion Emerson Fittipaldi was battling Revson for second but damaged his front wing in a failed overtake. The resulting pit stop dropped him down to 11th, two laps behind.

1989 Portuguese Grand Prix
Nigel Mansell had a catastrophe of a race that would make Pastor Maldonado’s approach to racing look subdued. He drove brilliantly to be leading when he pitted, only to overshoot his pit box. He reversed back into his box, had his tyres changed, and went on his way.

The only problem was that reversing in the pit lane was (and still is) very illegal. Mansell was shown the black flag and was disqualified but instead of heeding it, he carried on racing for a few more laps, only to end up taking out Ayrton Senna in the process. Whoops.

The race was also an excellent one for backmarker teams. Roberto Moreno managed to muscle his Coloni onto the grid in a stunning 15th, the last time the small Italian team would actually qualify for a race until its demise in 1991. Pierluigi Martini qualified and finished fifth for Minardi, on the way even managing to lead a lap – the only time Minardi would do so in its 21-season history.

Perhaps most unusually of all, Stefan Johansson finished third in an Onyx. He’d failed to pre-qualify for the previous race in Italy and would fail to pre-qualify at the next race in Spain. That’s quite the turnaround in form!

1995 Portuguese Grand Prix
After coming close several times, David Coulthard finally managed to take his first victory with a comfortable win ahead of Michael Schumacher. There was drama at the start of the race, however, as Ukyo Katayama was left unconscious following a start line collision with Luca Badoer. Thankfully he was OK, though he had to sit out the next race.

2000 United States Grand Prix
Formula 1 returned to the USA for the first time since 1991 with a race on the newly-built road course at Indianapolis Motor Speedway. Michael Schumacher took the win and a big boost in the championship as main rival Mika Hakkinen retired with a blown engine. It was a bad day all-around for McLaren as David Coulthard blew his own chances when he jumped the start.

There was also an amusing moment early in the race when Hakkinen was overtaken by the Minardi of Gaston Mazzacane. Sure, there was a huge tyre difference, but who cares? It’s the original ‘Takuma Sato passing Fernando Alonso’!

Birthdays
Mike Parkes (born 1931) was an incredibly promising driver who already had a pole position and two podiums in his six races for Ferrari in 1966 and 1967. However, at the 1967 Belgian GP he badly broke his legs in an accident, effectively ending his F1 career. 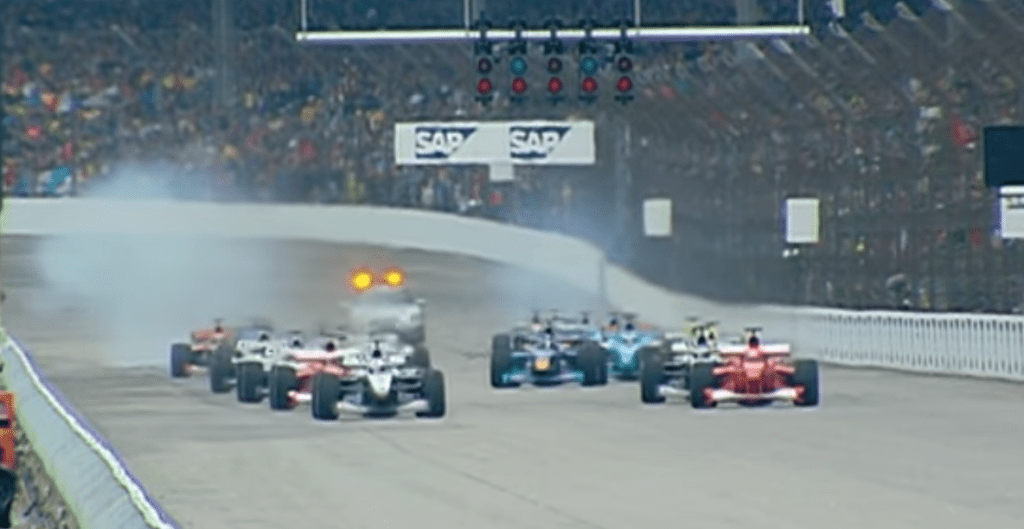