On This Day In F1 – It Happened

1950 British Grand Prix
After a few years of non-championship races after the Second World War, Formula 1 was finally organised into a world championship – the very first round of which took place at Silverstone on 13 May 1950. Ferrari decided not to show up following a dispute over the starting money and the event was dominated by Alfa Romeo, qualifying in the top four places and finishing in the top three (Juan Manuel Fangio retired from second place with just a handful of laps to go) as Giuseppe Farina took the honour of being the first driver to win a world championship Formula 1 race. Luigi Fagioli finished second and Red Parnell third – the next highest non-Alfa was the Talbot-Lago of Yves Giraud-Cabantous, two laps down.

1956 Monaco Grand Prix
Stirling Moss led the whole distance for Maserati, beating Peter Collins and Juan Manuel Fangio – who’d shared a car on their way to second place – and Jean Behra. Fangio had taken over Collins’ car after hitting a wall and damaging a wheel on his own car which, once it had been repaired, returned to the track in the hands of Eugenio Castellotti. He ended up fourth, meaning Fangio had technically finished in two positions, though he only received the points for his second-place finish, plus an extra one for setting the fastest lap.

1979 Belgian Grand Prix
Jody Scheckter won his first race of the season after Alan Jones’s Williams broke down with electrical problems and Patrick Depailler crashed out of the lead. Jacques Laffite finished second and Didier Pironi third. Gilles Villeneuve had endured a wild race – he had to pit for a new nose on the second lap which dropped him to the back of the field, but had made his way back up to a podium position by the end of the race, only to run out of fuel with half a lap to go.

1990 San Marino Grand Prix
Riccardo Patrese won his first race for nearly seven years after passing Gerhard Berger in the closing stages. Ayrton Senna only lasted a few laps before a wheel broke, while Thierry Boutsen also briefly led, only for his engine to fail.

2001 Austrian Grand Prix
Juan Pablo Montoya led the early part of the race had was enjoying a nice little dice with Michael Schumacher. Eventually, Schumacher got a run and as Montoya tried to defend the inside, he braked slightly too late and ran off the track and onto the gravel, taking Schumacher with him. Both rejoined, albeit well down the field.

That left Rubens Barrichello in the lead, but he was passed by David Coulthard during the pit stops as the McLaren driver went on to take his second win of the year. Barrichello didn’t get to finish second, though, as he was ordered to give the position up to Schumacher, which he did on the final lap. Although it was a decision that baffled many so early in the season, it was slightly more understandable than it would be the following year – at this stage of the season, Coulthard was a genuine threat for the title and moved to within four points of Schumacher, while Barrichello was already a long way behind.

2007 Spanish Grand Prix
Fernando Alonso made a bit of an error at the first corner when he tried to pass pole-sitter Felipe Massa around the outside, only to bang wheels with the Ferrari and end up running across the gravel and dropping to fourth. Massa carried on to win ahead of Lewis Hamilton, while Alonso ended up third following an early retirement for Kimi Raikkonen. The result meant that Hamilton led the championship only four races into his F1 career, making him the youngest driver to ever lead the championship – a record he still holds.

2012 Spanish Grand Prix
Pastor Maldonado was promoted to pole position after Lewis Hamilton was thrown out of qualifying for not having enough fuel.

He lost the lead at the start but recovered to beat Fernando Alonso in a straight fight, taking Williams’ first win in eight years.

The Williams garage caught fire after the race and Maldonado was seen heroically rescuing his cousin from the smoke.

It was – without a doubt – the single greatest day in Formula 1 history.

2018 Spanish Grand Prix
Lewis Hamilton thrashed Valtteri Bottas in a slightly underwhelming race as Max Verstappen pinched third from Sebastian Vettel. Romain Grosjean caused a bizarre situation on the first lap when he spun at Turn 3 but decided to mash the throttle instead of backing off. He slid across the track, causing a massive smokescreen, and taking Nico Hulkenberg and Pierre Gasly out of the race with him.

Archie Scott Brown (born 1927) was born with disfigured legs and missing his right hand but, after a number of operations when he was younger, was determined to become a racing driver. His disability caused him to be briefly banned from motorsport but such was his talent that it wasn’t long before the ban was overturned on an appeal. In 1956 he entered the 1956 British GP, qualified 10th, and was running seventh until his car failed. He died following a sportscar accident while battling for the lead at Spa two years later.

Paddy Driver (born 1934) had a decent grand prix career on two wheels and, like a few other riders at the time, decided to also have a crack on four wheels. He entered the 1963 South African GP but crashed during practice, and returned to the same race 11 years later for his second and final F1 attempt, where he retired after just six laps. 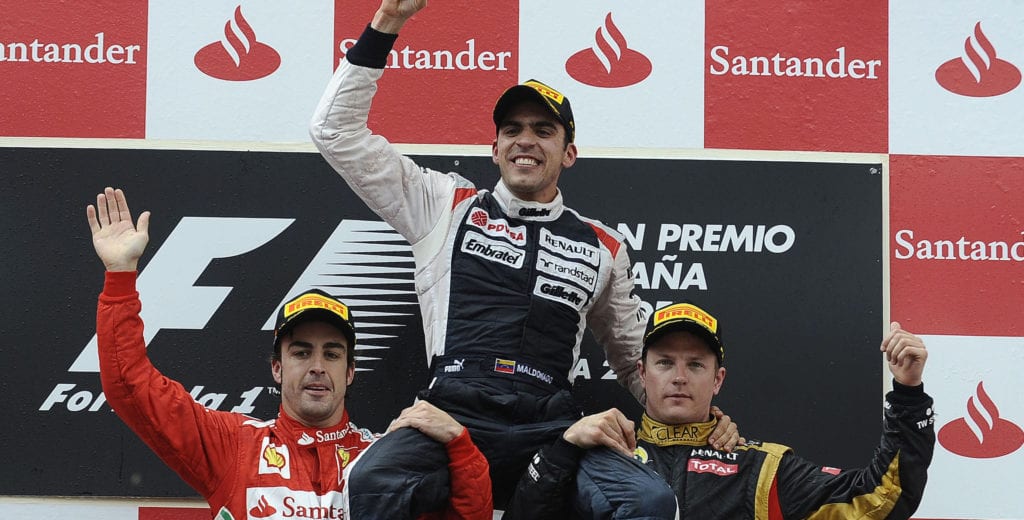