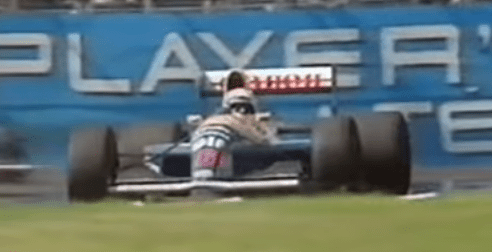 1991 Canadian Grand Prix
Nigel Mansell had led every single lap of a race in which many of the other top runners had retired, and he looked set to take his first victory of the season. However, on the final lap, it all went wrong. As he was waving to the crowd and indulging in a bit of premature celebration, Nigel let the revs on his Williams FW14 drop too low. The loss of power caused the engine management system to cut out and the car stalled just a couple of corners from home. Ouch.

To make matters worse, it was his former teammate and arch-rival Nelson Piquet who benefitted, snatching an unlikely win for Benetton. It turned out to be Piquet’s final grand prix victory – always one for a great quote, he later described his feelings at taking the win, saying he “almost came” when he saw Mansell stranded at the side of the circuit. Stefana Modena finished second for Tyrrell with Riccardo Patrese third, while the Jordan team scored its first points courtesy of Andrea de Cesaris and Bertrand Gachot in fourth and fifth.

1996 Spanish Grand Prix
Michael Schumacher was already known as a phenomenal wet-weather driver but his performance at a flooded Catalunya circuit established himself as one of the very best. Starting third on the grid, he dropped to sixth at the start but calmly worked his way through the field, taking the lead from Jacques Villeneuve on lap 12. From then on he really put the hammer down and for the rest of the race, Schumacher was consistently seconds a lap faster than anyone else – his fastest lap was 2.2 seconds quicker than the next best – as he took his first win for Ferrari.

To be fair to his rivals, Schumacher and Ferrari had gambled on a fully wet setup while many others had hedged their bets in case the track dried up. However, it was still a mega drive from an all-time great in a car that was nowhere near good enough to win races. Jean Alesi finished second ahead of Jacques Villeneuve as championship leader Damon Hill spun three times in the 10 laps his race lasted.

Birthdays
Jan Lammers (born 1956) raced in F1 between 1979 and 1982 for a series of backmarker teams such as Shadow, ATS, Ensign and Theodore. Failures to qualify were plentiful and his best result was a ninth place for Shadow in the 1979 Canadian GP. From then on he went to race in sportscars with huge success before making a surprise F1 comeback with the March team in 1992 – over 10 years after his last grand prix. He drove for the team in the last two races of the year, marking the longest gap between races for any driver, and was set to continue into 1993 before the team folded.