On This Day In F1 – Michael Schumacher And Ferrari Had A Wild Party – WTF1
Skip to content
×
Formula 1 , On This Day

1973 Austrian GP
Ronnie Peterson took victory for Lotus after teammate Emerson Fittipaldi broke down from the lead with just a few laps to go. Jackie Stewart finished second in what would prove to be his final podium finish, while Carlos Pace took third for Surtees – the team’s second and last F1 podium.

1984 Austrian GP
Niki Lauda finally took victory in his home race in a typically canny drive. He started fourth and despite dropping to sixth on the first lap he was soon up to third – which became second when teammate Alain Prost spun off. He then caught up to leader Nelson Piquet and pounced as the pair lapped Michele Alboreto’s Ferrari, eventually winning by some 23 seconds. Alboreto was third in the end, ahead of Teo Fabi’s Brabham, while Arrows managed to get both cars home in the points for the very first time in the team’s six-and-a-half-season history.

2001 Hungarian GP
In what would become a disappointingly familiar sight over the next few years, Ferrari clinched both championships early in the season by finishing one-two. Michael Schumacher dominated to win both his fourth championship and his 51st grand prix, equalling Prost on both counts. Mika Hakkinen finished sixth, taking the 25th and final fastest lap of his career along the way.

Birthdays
While Michael Schumacher equalled some of Prost’s racing achievements on this day in 2001, Nico Hulkenberg equalled Prost’s achievement of being born. The Hulk came into the world in 1987, smashed his way through the junior formulae and has become one of the must-have drivers for midfield teams. That first podium still eludes him, though…

There are a couple of other birthdays, too. Dennie Poore (born 1916) drove two grands prix in a Connaught in 1952, finishing fourth at Silverstone, while Oscar Laurrari (born 1954) drove for the glory of the Eurobrun team in 1988 and 1989. He had little chance to impress in a car which often wasn’t good enough to qualify (or even pre-qualify). He did stick the car 18th on the grid at Monaco in 1988, but his best result was 13th in the following race in Mexico. 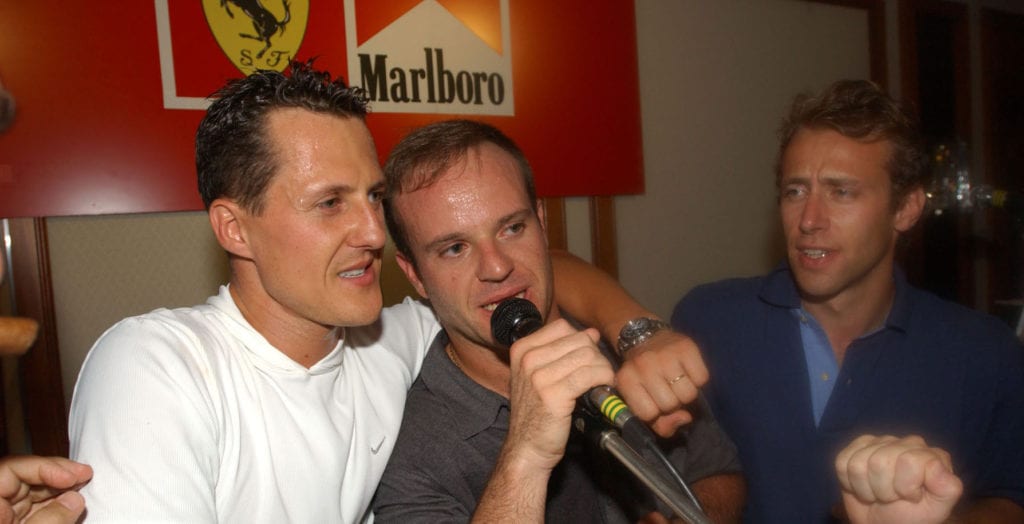