On This Day In F1 – Niki Lauda Had A Rather Large Accident – WTF1
Skip to content
×
Formula 1 , On This Day

1954 German Grand Prix
Lasting for three hours and 45 minutes, this was the longest grand prix in history until the 2011 Canadian GP – the main difference being that unlike Canada, in this race the drivers didn’t have the benefit of a lengthy red flag delay in the middle of it. Juan Manuel Fangio took the win ahead of the Ferrari shared by Mike Hawthorn and Jose Froilan Gonzalez, with Maurice Trintignant third.

1965 German Grand Prix
Jim Clark comfortably wrapped up his second title with three races to spare, with main rival Graham Hill second and Dan Gurney third. This meant Clark had won all six of the races that he’d entered that season (he missed Monaco because he was busy winning the Indy 500) and, due to the dropped scores system which only counted the best six race results, Clark had scored 100 per cent of the possible points available to him – just as he had with his first championship in 1963. In this race he also achieved his eighth and final grand chelem – pole, fastest lap, the win and leading every lap – setting a record that has still yet to be beaten (Lewis Hamilton, Michael Schumacher and Alberto Ascari are next up, tied on five each).

1971 German Grand Prix
Jackie Stewart led home Francois Cevert in a Tyrrell one-two as the Scot edged ever closer to his second world championship. Main title rival Jacky Ickx (usually a bit of an ace at the Nordschleife) was running second when he spun and hit the wall on the second lap, dropping out of the race. Clay Regazzoni ended up third for Ferrari with Mario Andretti fourth – surprisingly, his best-ever result at the circuit.

1976 German Grand Prix
Niki Lauda was trying to make up for lost time after an early pit stop when, on the second lap of the race, his suspension failed heading into the Bergwerk corner. His Ferrari burst into flames and was by the cars of Harald Ertl and Brett Lunger. Seeing Lauda in trouble, both drivers – along with Guy Edwards and Arturo Merzario, who’d stopped to assist – helped extract Lauda from his burning car, an act of bravery that almost certainly helped save his life. The race was stopped and Lauda was rushed to hospital where, for a long while, it looked as though he wasn’t going to make it. Angered at hearing a priest read him his last rites, Lauda fought back to something resembling health was back racing again just six weeks later in one of sports most remarkable and fearless comebacks.

Following Lauda’s crash, the restarted race was won by James Hunt ahead of Jody Scheckter and Jochen Mass. The Nordschleife had hosted its last grand prix – Lauda’s crash triggered the realisation that the track was no longer suitable for Formula 1 and the German GP was hosted at Hockenheim the following year.

1999 German Grand Prix
With Michael Schumacher out of action with a broken leg, Ferrari had called up Mika Salo to substitute for him. After finishing a lowly ninth in his first race for the team in Austria, Salo was much more at home in Germany and, when Mika Hakkinen spun out after a tyre failure, he inherited the lead.

However, it only lasted for a single lap. With Ferrari most interested in securing a drivers’ title for Eddie Irvine, Salo was ordered to move aside and gift his teammate the win. As Irvine won his third race of the year and took the championship lead, Salo remained second – it was still his first podium, and a grateful Irvine gave him his trophy after the race. Heinz-Harald Frentzen continued to stealth his way into title contention by finishing third for Jordan.

2010 Hungarian GP
After leading the early laps, Sebastian Vettel’s race fell apart when he was handed a drive-through penalty for falling too far behind the safety car. This ultimately dropped him to third, unable to find a way past Fernando Alonso’s Ferrari, while Mark Webber cruised to his fourth win of the season and took the championship lead.

The most dramatic moment of the race, however, happened when Rubens Barrichello attempted to overtake former teammate Michael Schumacher at the end of the race. Schumacher hadn’t exactly shown blistering speed in his comeback season but he was still as determined as ever. When Barrichello pulled alongside the Mercedes, Schumacher forced the Williams towards the pit wall and into the pit exit, leaving absolutely no more room than was required. Barrichello was having none of it, kept his foot in and completed the pass, though he later accused the German of trying to kill him. Schumacher was given a 10-place grid drop at the next race for his overly-aggressive driving.

Birthdays
Allen Berg (born 1961) started nine races with the Osella team in 1986 and although his pace wasn’t exactly great, he was at least able to get the car to the finish on four occasions; teammate Piercarlo Ghinzani finished just one race all season. Of those four races, his best result was a 12th place in Germany. 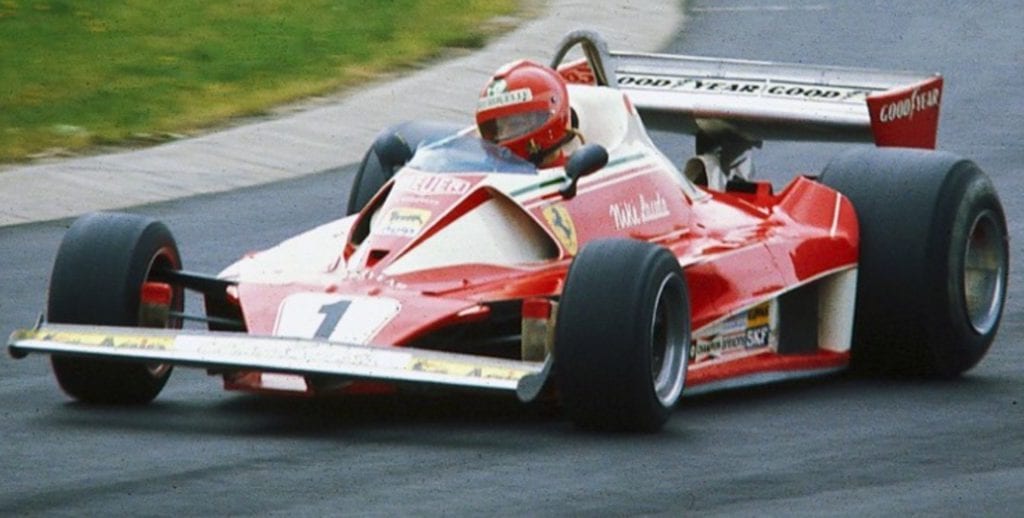