On This Day In F1 – One Of Massa’s Finest Races Went Completely Unrewarded – WTF1
Skip to content
×
Formula 1 , On This Day

1952 German Grand Prix
Alberto Ascari’s fourth win in a row was enough for him to clinch his and Ferrari’s first world championship (the constructors’ championship didn’t exist until 1958). Giuseppe Farina finished second with Rudi Fischer third.

1958 German Grand Prix
While battling with Tony Brooks for the lead of the race (and a way back into championship contention), Peter Collins crashed his Ferrari while driving through the high-speed Pflanzgarten section of the Nordschleife. Collins’ head hit a tree and, later that day, one of the finest drivers of his era passed away from his injuries. Brooks won ahead of Roy Salvadori and Maurice Trintignant.

1969 German Grand Prix
Jackie Stewart’s run of success was ended as, for the first time all season, he was beaten on track by another driver. Stewart led the first half of the race but ‘Ringmaster Jacky Ickx made a move stick and went on to win. Stewart held on to second despite developing some gearbox problems, with Bruce McLaren third.

1975 German Grand Prix
The Ferrari drivers were looking strong but on the 10th lap of the race, everything went wrong. Clay Regazzoni was in second when his engine failed, and Niki Lauda lost the lead when he developed a puncture. Lauda rejoined in fifth after a pit stop and was able to finish third after James Hunt retired and Tom Pryce dropped back, while Carlos Reutemann won for Brabham, almost 100 seconds ahead of Jacques Laffite, who put in a fine drive to give Frank Williams’ team its first podium in almost five years.

2003 German Grand Prix
Juan Pablo Montoya was in simply untouchable form as he won by more than minute which, with Michael Schumacher a lap down in seventh, closed the Colombian to within six points of the championship lead. David Coulthard finished second for McLaren, while the Renaults of Jarno Trulli and Fernando Alonso were the only two other cars on the lead lap.

2008 Hungarian Grand Prix
Felipe Massa had driven a quite brilliant race. Starting third on the grid, he superbly passed Lewis Hamilton around the outside of the first corner to the lead and then slowly edged away from his championship rival, despite the McLaren looking to be the slightly better car around the twists and turns of the Hungaroring.

A good day for Massa was turning into a better day when Hamilton dropped down the order with a puncture (the legacy of an earlier lock-up) but, with just three laps to go, the Ferrari’s engine failed. Heikki Kovalainen was therefore promoted to a slightly lucky first (and only) grand prix victory, with Timo Glock taking his first podium for Toyota in second and Kimi Raikkonen third. Lewis Hamilton recovered to finish fifth and extend his championship lead.

Birthdays
Louis Chiron (born 1899) started 15 races in his F1 career, most of which were in the first two years of the world championship in 1950 and 1951. His best result came in his home race at Monaco in 1950 where he finished third. The 1955 Monaco GP was his last race and, at 55 years and 292 days, became the oldest driver to race in F1. In 1958 he entered Monaco again and failed to qualify, setting the record for the oldest driver to enter a race at a remarkable 58 years and 288 days old. For comparison, that’d be like Damon Hill – who’s 58 at the time of writing – entered this weekend’s Hungarian GP!

Jules Bianchi (born 1989) was the first driver signed up to the Ferrari Driver Academy in 2009 and, following some impressive seasons in the junior formulae and tests for Ferrari and Force India, was signed by at the last minute by Marussia for the 2013 season. He comprehensively outpaced teammate Max Chilton and the following season delivered the team its first points with a sensational drive to ninth place at Monaco.

He was set to join Sauber for 2015 and was being earmarked for a future seat at Ferrari, but during the 2014 Japanese GP he slid off the circuit in appalling conditions and hit a recovery vehicle that was attending to Adrian Sutil’s Sauber. He was critically injured and remained in a coma for nine months until, in July 2015, he passed away, becoming the first driver to die from an accident during an F1 weekend since Ayrton Senna more than 20 years previously. 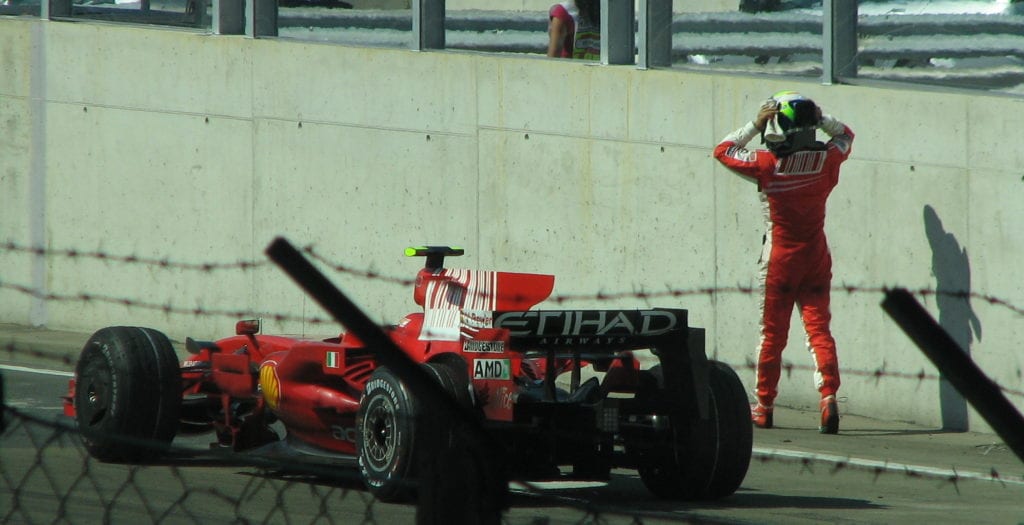