On This Day In F1 – Raikkonen Had An Engine Failure And Schumacher Got A Push – WTF1
Skip to content
×
Formula 1 , On This Day

1980 French Grand Prix
Jacques Laffite was looking set to give the home crowd a French victory for the second year on the trot. However, he’d gone too hard at the start of the race and destroyed the tyres on his Ligier, dropping him to a distant third. Alan Jones took over at the front and went on to win ahead of the other Ligier of Didier Pironi.

1997 French Grand Prix
As Jacques Villeneuve had a somewhat anonymous weekend to finish fourth, Michael Schumacher won easily from Heinz-Harald Frentzen and Eddie Irvine. On the final lap of the race, Jean Alesi tried to pass David Coulthard for fifth, only to end up shoving the McLaren driver off the road and out of the race. This allowed Ralf Schumacher into sixth – a position gain only made possible because his brother had allowed him to unlap himself on the final lap.

2003 European Grand Prix
Kimi Raikkonen comfortably led the early stages of the race until he dropped out with a rare (for 2003!) engine failure. That left Ralf Schumacher to win his first race of the season ahead of Juan Pablo Montoya. In fact, Montoya had been battling Michael Schumacher and was able to pull off a brilliant pass around the outside of the Dunlop hairpin. In the process of being overtaken, Schumacher nudged the side of the Williams and spun – the rear of his Ferrari beached in the gravel, the front on the circuit. Marshals pushed him back onto the circuit (which was allowed in this case because he was in a clearly dangerous position) and he went on to finish fifth behind Rubens Barrichello and Fernando Alonso.

Birthdays
Harry Schell (born 1921) was the first American driver to race in F1 and was a constant name on the grids of the 1950s, starting 57 times between 1950 and 1960. He was able to score a couple of podiums with a best result of second in the 1958 Dutch GP, and is notorious for a cheeky stunt he pulled during qualifying for his home race at Sebring in 1959. He discovered a shortcut out at the back of the circuit where nobody was watching and, at the end of the session, used it to jump from 11th to third on the grid – and got away with it!

Nicholas Latifi (born 1995) had a reasonably long junior career and finished second in the 2019 F2 season – enough to earn him a seat with Williams for the 2020 season alongside George Russell. 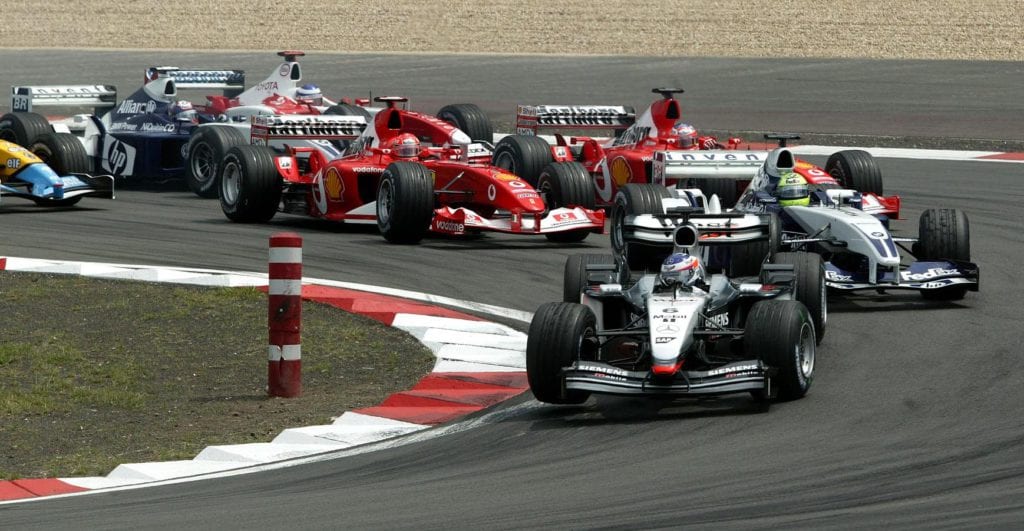