On This Day In F1 – Schumacher Had An Absolutely Epic ‘Final’ Race – WTF1
Skip to content
×
Formula 1 , On This Day

1967 Mexican Grand Prix
Jack Brabham needed to win the race to have any chance of winning the championship, but Jim Clark was busy being Jim Clark – in other words, too good – and won by almost a minute and a half. Brabham was second and his teammate Denny Hulme finished third, enough to clinch the title.

1989 Japanese Grand Prix
With a handful of laps to go, Ayrton Senna launched a move up the inside of Alain Prost at the chicane from absolutely miles back. But instead of leaping out of the way to avoid an accident, Prost simply turned in. The two cars collided. Prost was out, whilst Senna carried on, pitted for a new nose, and recovered to win.

However, after the incident, Senna received a push start and then cut across the entire chicane to rejoin the track. Between finishing the race and getting to the podium, he’d been disqualified. Alessandro Nannini therefore won his first race ahead of the two Williams’ of Riccardo Patrese and Thierry Boutsen as Prost secured his third world championship.

1995 Pacific Grand Prix
The second and final grand prix to be held at the TI Aida Circuit (now called Okayama) in Japan saw Michael Schumacher clinch his second world championship with a victory. He dropped to fourth on the first lap and made his way through to the lead by a combination of strategy and some blistering laps in clean air, dropping the Williams pairing of David Coulthard and Damon Hill to second and third.

2000 Malaysian Grand Prix
Both McLaren’s jumped ahead of Michael Schumacher at the start, but it didn’t last long. Mika Hakkinen was penalised for having jumped the start, while David Coulthard lost the lead to Schumacher at the first round of pit stops. And that’s pretty much how it stayed, Schumacher just ahead of Coulthard, with Rubens Barrichello third and Hakkinen fourth.

This was also the final race for Johnny Herbert – although it didn’t end well. His Jaguar suffered suspension failure towards the end of the race, he creamed into the barriers, and had to be carried away from the car.

2006 Brazilian Grand Prix
Fernando Alonso clinched title number two with a straightforward drive to second place as Michael Schumacher’s ‘last’ race turned into something of a masterclass. Early contact with Giancarlo Fisichella left him with a puncture and way down in last.

From then on, Schumacher went on a charge, scything his way through the field with some brilliant overtakes, leaving absolutely nothing on the table to finish fourth. His fastest lap of the race was also seven tenths quicker than anybody else’s – it was a fine way for him to round out his F1 career. Or so we thought…

Felipe Massa won his home race from pole, Jenson Button drove from 14th to third, and Kimi Raikkonen finished fifth after having a shit during Schumacher’s farewell presentation on the grid.

2017 United States Grand Prix
Sebastian Vettel did his best to delay the inevitable, but Lewis Hamilton took victory at COTA to claim his fourth championship. Max Verstappen put in a sensational performance from 16th on the grid, pulling off a mega pass on the final lap to take third away from Kimi Raikkonen. However, to do so he’d cut the track and was given a penalty which dropped him back to fourth. 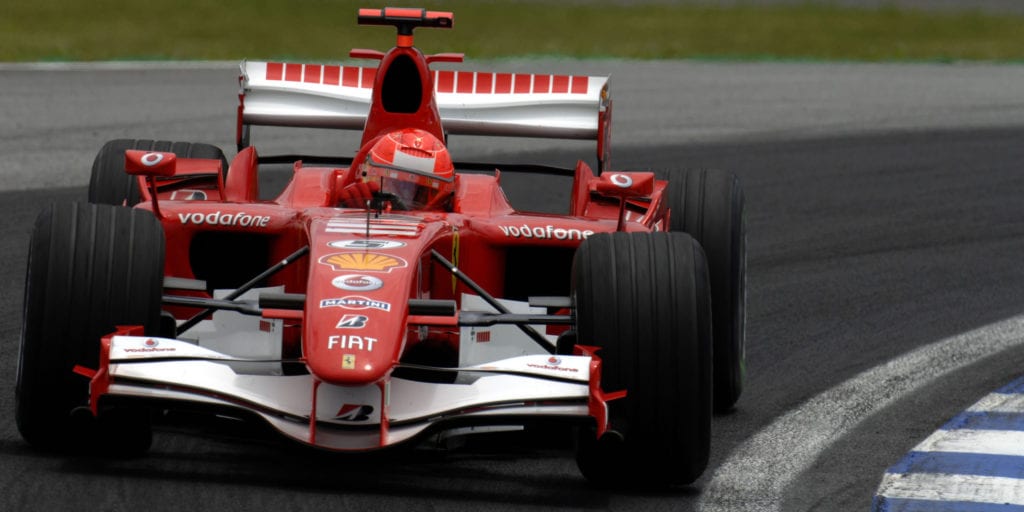