On This Day In F1 – Senna Angered Prost By Breaking A Pre-Race Agreement – WTF1
Skip to content
×
Formula 1 , On This Day

1989 San Marino Grand Prix
Gerhard Berger was lucky to survive an enormous accident at Tamburello at the start of the fourth lap of the race when his Ferrari pitched into the barriers at colossal speed and caught fire. Thankfully, the quick actions of the marshals had the blaze out within just a few seconds and Berger was able to escape with just some minor burns and a couple of broken ribs, though he’d miss the next race at Monaco.

Berger’s crash caused a race stoppage which ended up causing a major rift between the two McLaren drivers of Ayrton Senna and Alain Prost, who’d locked out the front row in qualifying. Because of the long, high-speed run from the start, through Tamburello and into the first proper corner at Tosa, the two drivers had a pre-race agreement that whoever got off the line best would not be attacked by the other into Tosa in order to give them the best chance of remaining at the front.

At the first start, that’s exactly what happened – Senna led away from pole and Prost stuck behind him on the first lap. However, at the second start, Prost got the better launch and was leading on the run down to Tosa. To his surprise, Senna had tucked into the slipstream and got a run back up the inside, retook the lead, and went on to win from Prost, with Alessandro Nannini’s Benetton a lap down in third.

After the race, an incensed Prost claimed that Senna had broken the pre-race agreement – Senna’s take was that the agreement was only valid for the first start, and that at the restart it was anyone’s game. Though the two had raced incredibly hard during the previous season, for many this was the beginning of the total breakdown in relations between the pair which ended with Prost leaving the team at the end of the season.

2000 British Grand Prix
Whoever had the bright idea of hosting the British GP in April probably ended up with enormous regrets as consistent rain throughout the weekend turned the spectator areas into a complete muddy swamp. People couldn’t get in or out of the circuit and many had to be turned away from the event despite having valid tickets. They missed out on what was a good event for the home fans as David Coulthard held off teammate Mika Hakkinen to win his second British GP in a row with Michael Schumacher third, Ralf Schumacher fourth, and Jenson Button fifth in his first home grand prix.

2006 San Marino Grand Prix
The race was something of a reverse of the previous year’s event, with Fernando Alonso rampantly chasing Michael Schumacher for the lead in the closing stages until a mistake spelt the end of his chances and he ended up second. Juan Pablo Montoya finished third after Jenson Button mistakenly left his pit box while the refuelling nozzle was still attached. Though he stopped in time for the team to remove it, the delay dropped him to seventh place and cost him a podium. This was also the last race for the legendary Yuji Ide – after he shovelled Christijan Albers into a barrel roll on the opening lap the team opted to replace him for the next race before the FIA eventually revoked his super licence.

News
Stirling Moss was competing in a non-championship F1 race at Goodwood when he crashed his Lotus so ferociously that his head hit the steering wheel, completely buckling it. Moss was left in a coma for a month and partially paralysed for months afterwards. Following a test session a year later, Moss realised he couldn’t make a comeback, spelling the end of his career. It meant that the chance of seeing him battle with the likes of Jim Clark would never be realised and ensured that Moss would go down as the greatest driver never to win a world championship.

Birthdays
When you think of legendary driver/team associations you might think of Senna and McLaren, or Schumacher and Ferrari. However, you should also think of Pierluigi Martini (born 1961), who entered 107 of his 124 races between 1984 and 1995 with the Minardi team – across three separate stints. As a result, he’s responsible for many of the team’s highlights – his pair of fourth places during 1991 were his best results (and equalled that of the team’s) and in 1990 he gave Minardi its best qualifying result when he plonked his M189 on the front row at Phoenix. The year before that he’d also led Minardi’s only lap, when he briefly headed the field in Portugal during the pit stops on his way to fifth place.

Paul Belmondo (born 1963) is the son of French actor Jean-Paul Belmondo and managed to make his way into F1 for a brief period in the early 1990s. He did half a season with March in 1992 with a best finish of ninth before his money ran out, and then in 1994 raced for the Pacific team, where he failed to qualify for all but two races. 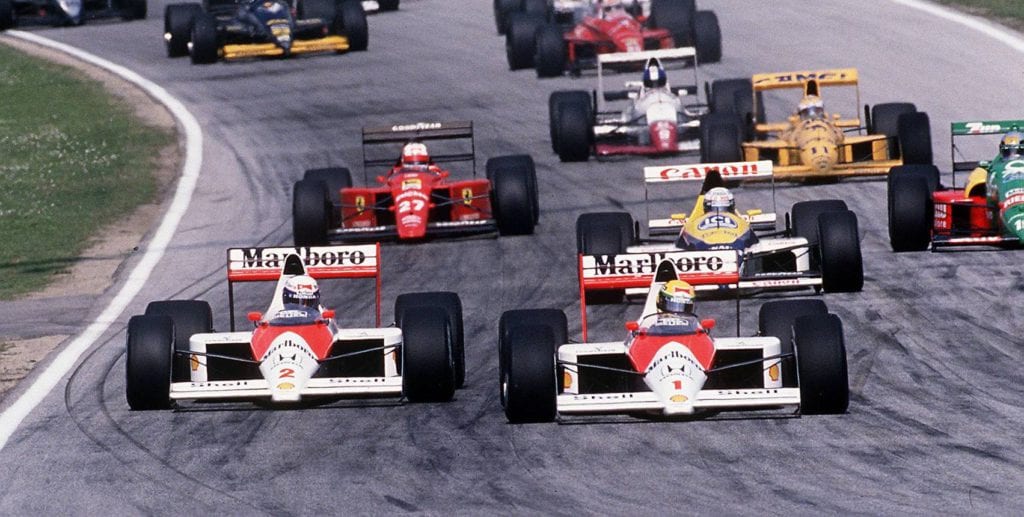