On This Day In F1 – Senna Had A Few Choice Words For Schumacher – WTF1
Skip to content
×
Formula 1 , On This Day

1953 French Grand Prix
The long straights of Reims were perfect for epic slipstream battles – and that’s exactly what happened in 1953 in what became known as the race of the century. Jose Froilan Gonzalez led the first half but was planning to pit at half distance – when he did so, Juan Manuel Fangio and Mike Hawthorn were left to fight it out for the win. Reports from the time mention the two being side by side for almost literally the entire race, with other drivers even being keen to get lapped so that they could watch the battle.

After almost three hours of racing, it was a young Mike Hawthorn who crossed the line ahead of Fangio to win his first race. Gonzalez recovered to third and had enjoyed his own battle with Alberto Ascari, who finished fourth – just over four seconds behind race winner Hawthorn. Incredibly, this was the first time Ascari had been beaten in a grand prix since 1951.

1959 French Grand Prix
Tony Brooks dominated the race for Ferrari ahead of teammate Phil Hill and the Cooper of Jack Brabham. The drama came after the race when another Ferrari driver, Jean Behra, caused a bit of a dust-up in the pits. Behra (who’d had nine podiums in his career without a win) had retired from his home race with engine failure and accused his team of giving Brooks better equipment. After riling himself up, Behra punched team manager Romolo Tavoni and was unsurprisingly fired.

1981 French Grand Prix
Alain Prost won his first grand prix after a mid-race rain shower split the race into two halves. Nelson Piquet comfortably led the first part but when the race resumed after a red flag, Prost wasted no time in passing him and going on to win. Piquet ended up slipping to third as John Watson made his way into second place.

1987 French Grand Prix
Nelson Piquet and Nigel Mansell had a tense battle for the win largely dictated by strategy. Piquet had been second in the early stages but, by being the first to pit for new tyres, was able to take the lead when Mansell made his stop. Mansell started closing the gap and retook the lead when Piquet had a spin -for the second time in the race. The Brazilian then made another pit stop but lost time after he stalled the car, remarkably prompting James Hunt to say during commentary that these were all signs that Piquet should retire!

Although Piquet started to rapidly gain on Mansell, the race ran out of laps and he ended up second. Alain Prost had been in the mix early on but ended up a distant third, with Ayrton Senna a lap down in fourth.

1992 French Grand Prix
Riccardo Patrese finally looked like he was going to benefit from the dominant Williams FW14B and win his first race of the season after taking the lead at the start and remaining there. However, during a restart following a race stoppage for rain, he waved Mansell ahead as the Brit went onto win in a very obvious case of team orders. Patrese remained second as Martin Brundle finished third. Michael Schumacher spun Ayrton Senna out on the first lap and later felt the Brazilian’s wrath – during the red flag period, Senna went onto the grid and gave Schumacher a lengthy dressing down.

2015 British Grand Prix
Williams stole the show when Felipe Massa and Valtteri Bottas went from third and fourth on the grid to first and second on the opening lap after getting a much better start than the Mercedes drivers. They stayed there, too, but although Massa was leading, it looked as though Bottas was faster. Williams opted not to issue any team orders, however, and Lewis Hamilton was able to undercut the pair of them and take the lead through the pit stops.

Despite a late rain shower threatening to upset the order, Hamilton won from Nico Rosberg (who’d been surprisingly quick in the rain) and Sebastian Vettel. Despite their brilliant start, Massa and Bottas only ended up fourth and fifth. 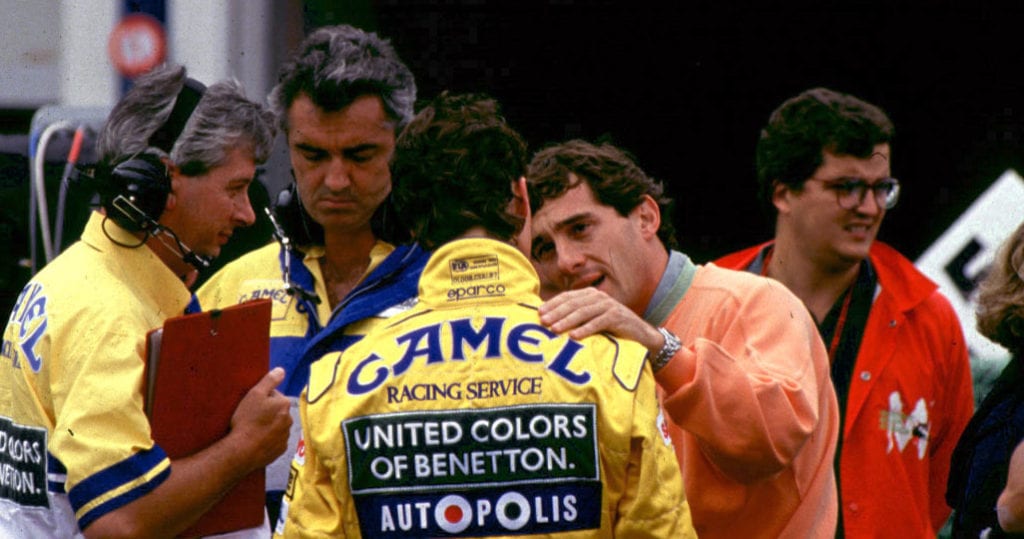