On This Day In F1 – Someone Tapped Into Hakkinen’s Radio And Forced Him To Pit – WTF1
Skip to content
×
Formula 1 , On This Day

1998 Australian Grand Prix
1998 was the beginning of a new era for F1 – slick tyres disappeared in favour of unusual grooved rubber, aerodynamics were reduced, and the cars became significantly narrower – all in the name of reducing the speeds. The new breed of cars were difficult to drive to the point where one viewer tried to place a bet that the race would have no finishers.

In the end, that assessment was way off as nine cars were running at the finish – although only two of them completed the whole distance. McLaren totally dominated, Mika Hakkinen winning from David Coulthard with third-placed Heinz-Harald Frentzen well over a lap behind. It hadn’t all been plain sailing for McLaren though as in the middle of the race, something unusual happened.

Hakkinen came into the pits, only to find that his crew were not only not ready for him, but that they hadn’t even been expecting him. A confused Mika drove through the pit lane and rejoined the circuit, giving up the lead to Coulthard in the process.

This led to controversy at the end of the race when, just a few laps from home, Coulthard slowed down and let Hakkinen through to win. Team orders in the first race of the year? Surely not! It turned out that the team was worried about reliability and instructed neither driver to push especially hard (and yet, they were still a lap ahead!). The drivers therefore reached an agreement to not fight each other and that whoever emerged from the first corner first would be the one to win the race. That driver was Hakkinen – and so Coulthard stayed true to his word and honoured the agreement.

It was a messy situation which would never have happened had it not been for Hakkinen’s ‘phantom’ pit stop. What was all that about!? At the time it was blamed on Hakkinen mishearing his engineer’s instructions (Mika had hearing issues after his horrific crash in 1995) but years later, Ron Dennis claimed that the team radio was tapped into by outsiders who were trying to influence the outcome of the race.

Birthdays
Michael Bartels (born 1968) substituted for Johnny Herbert at Lotus on occasion in 1991 but failed to qualify on all four of his attempts. After a couple more years in Formula 3000 he turned his attention away from single-seaters and went on to have success in DTM and GT racing. 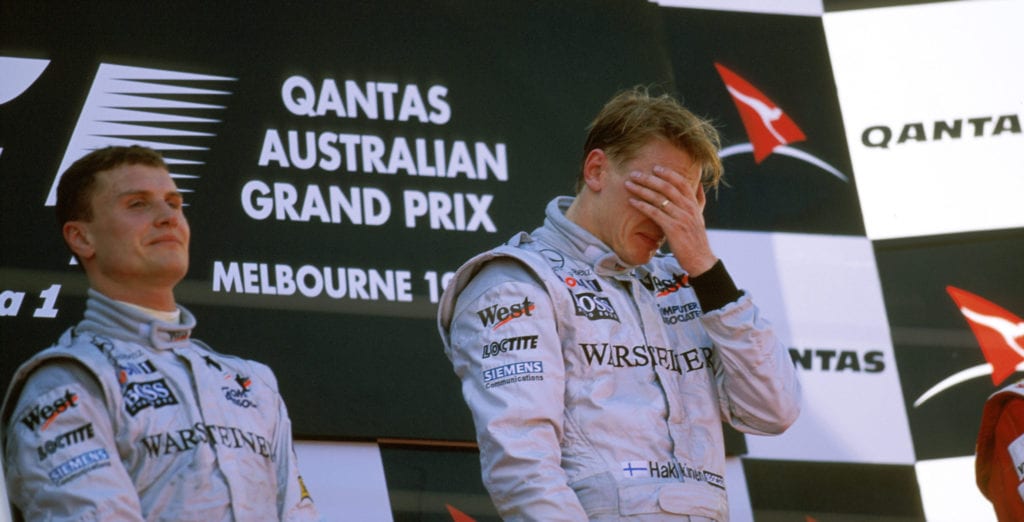