On This Day In F1 – Super Aguri Started Its Last Race – WTF1
Skip to content
×
Formula 1 , On This Day

On This Day In F1 – Super Aguri Started Its Last Race

1975 Spanish Grand Prix
The Montjuic Park street circuit was a superb track but many had concerns about its safety, in particular the barriers, which many felt hadn’t been installed properly. Many drivers chose not to take part in practice and even after work was done to fix the barriers, drivers threatened not to race. The organisers obviously wanted to see a race happen and suggested that if the drivers did strike, legal action would be taken and there were even suggestions that all the cars could be impounded. The drivers relented an everything eventually went ahead – albeit without Emerson Fittipaldi, who still wasn’t satisfied, withdrew from the weekend, and went home.

Wilson Fittipaldi and Arturo Merzario also withdrew in protest on the first lap of what would turn out to be a tragic race. On lap 26, Rolf Stommelen’s Hill – who was leading at the time – suffered a rear wing failure, sending his car flying into the crowd. Five spectators were killed and Stommelen broke several bones, yet despite the accident, the race carried on for another four laps before finally being stopped.

Jochen Mass was declared the winner from Jacky Ickx and Carlos Reutemann, with half-points being awarded for the first time in F1 history. Just 10 cars were left running at the end, one of which was Lella Lombardi, who scored half a point for finishing sixth, becoming the first (and so far only) female driver to ever score in F1. Unsurprisingly, F1 never raced at Montjuic Park again.

1986 San Marino Grand Prix
Alain Prost won his first race of the season – just. He’d dominated the second half of the race but came incredibly close to running out of fuel and had to weave heavily in the closing stages of the race to use up the last few drops, eventually crawling over the line a few seconds ahead of Nelson Piquet. Gerhard Berger finished third with Stefan Johansson fourth, with fifth and sixth-placed Keke Rosberg and Riccardo Patrese both running out of fuel.

1997 San Marino Grand Prix
After a difficult start to his first season with Williams, Heinz-Harald Frentzen finally claimed his first win by holding off Michael Schumacher at Imola. Eddie Irvine finished third as Jacques Villeneuve retired with a gearbox failure.

2008 Spanish Grand Prix
Kimi Raikkonen led home Felipe Massa for a Ferrari one-two as Lewis Hamilton finished third in a rather uninteresting Spanish GP. Heikki Kovalainen had an enormous accident at the high-speed Turn 9 following a wheel rim failure; Fernando Alonso had qualified on the front row thanks to a low fuel load but never got a chance to see how his alternate strategy would play out when his engine failed, and Jenson Button dragged his Honda to sixth place – the only points he’d score all season.

This was also the final race for the much-loved Super Aguri team. Anthony Davidson and Takuma Sato qualified on the back row; debris caused Davidson’s retirement early on while Sato got to the end in 13th and last place. By the time of the next round in Turkey, the team had gone into administration. That also made the race the last one for Sato and Davidson as neither were able to find an F1 seat in the future.

Bob Bondurant (born 1933) started nine races across 1965 and 1966 with a best finish of fourth in the 1966 Monaco GP. Following an accident in Can-Am the following year he turned his attention to instructing and set up a driving school which has taught multiple race drivers and actors the art of high-performance driving.

Helmut Marko (born 1943) started nine races for BRM in 1971 and 1972. Already a Le Mans winner with success in sportscar racing, he was just getting into the swing of F1 when, at the 1972 French GP, a stone was flicked up and went through his visor, permanently blinding him in his left eye and ending his racing career. Since then he’s become one of the best spotters of young driving talent as the head of Red Bull’s young driver programme. 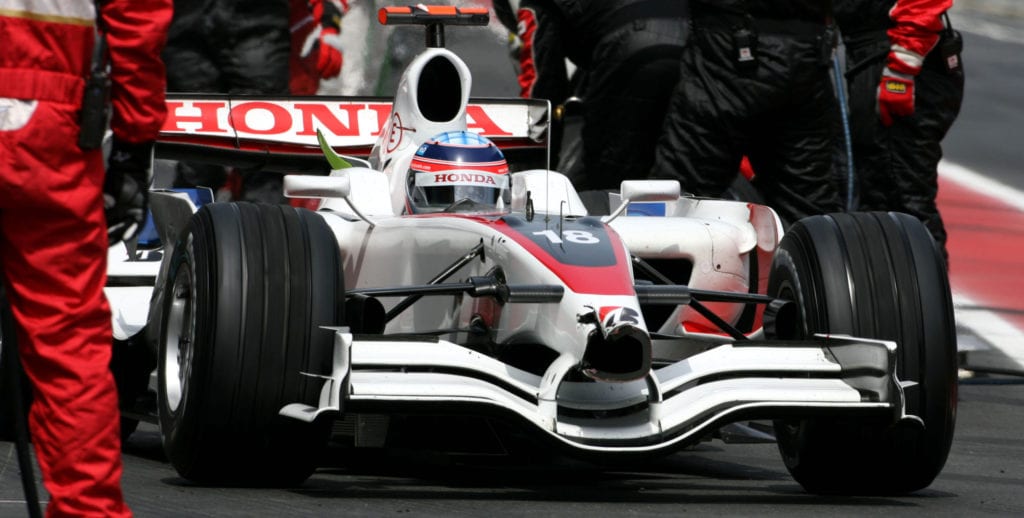