On This Day In F1 – The Leyton House Team Almost Won A Grand Prix – WTF1
Skip to content
×
Formula 1 , On This Day

1962 French Grand Prix
Dan Gurney gave Porsche its only F1 victory as a constructor as he won by more than a lap ahead of Tony Maggs and Richie Ginther. It was a slightly lucky win, however, as many of the other top contenders fell by the wayside: Jack Brabham and Jim Clark had suspension failures, Bruce McLaren dropped back with a spin, and John Surtees and Graham both lost several laps with car problems. Ferrari hadn’t even bothered to show up, courtesy of strikes in Italy.

1984 Dallas Grand Prix
Many drivers struggled to reach the end of a race which was both searingly hot and featured a track surface that was breaking up. In fact, a few drivers had tried to get the race cancelled as track repairs were still being executed half an hour before the race was due to start.

Nigel Mansell led the first half of the race before Keke Rosberg forced him into a mistake and took the lead. Then, Alain Prost took over at the front before grazing a wall and having to retire – one of 14 drivers to retire as a result of mistakes. That left Rosberg (who’d combatted the heat by wearing a special cooling cap – some other drivers had to rely on teams splashing them with water during pit stops) to take the win after the race hit the two-hour mark. Rene Arnoux brilliant went from the back to second, while Elio de Angelis was a lap down in third. Having led early on, Mansell dropped down the order with various issues when his gearbox broke within sight of the finish. Determined to reach the finish, he got out and pushed his Lotus across the line, famously collapsing as he did so. In the process, Piercarlo Ghinzani passed him for fifth place to score the only two points of the Italian’s 111-race career, but Mansell had done enough to be classified sixth and earn a point for his efforts.

1990 French Grand Prix
The first half of the race was fairly normal as Gerhard Berger led from Ayrton Senna and Nigel Mansell. But, as drivers began to pit, the Leyton House drivers of Ivan Capelli and Mauricio Gugelmin moved up the order and eventually found themselves running one-two.

By now, Alain Prost was running in third place, and he soon realised that neither of the drivers ahead of him were going to pit. Gugelmin eventually succumbed to engine failure, but Prost had to go some in order to catch Capelli. Thanks to some solid laps and Capelli’s car developing a misfire, Prost took the lead with three laps to go and won as Capelli held on to finish second ahead of Ayrton Senna.

It was an incredible result for Leyton House – at the previous race in Mexico, neither car had even managed to qualify for the race. The reason behind the upswing in pace was due to Paul Ricard being a much smoother surface which, coupled with an aerodynamic upgrade from a certain Adrian Newey, had transformed the car into almost becoming a race winner. Ironically, Newey had been let go by the team ahead of the race due to the previous poor performances – not that he minded too much as he ended up joining Williams soon after.

2007 British Grand Prix
Despite taking pole position for his home race, Lewis Hamilton had a slightly disappointing run to third place after being passed in the pit stops by Fernando Alonso and eventual winner Kimi Raikkonen. Felipe Massa also had a bad time when he stalled on the formation lap and had to start from the pit lane, but he managed a solid recovery to finish fifth, just behind Robert Kubica.

2012 British Grand Prix
Having taken an excellent pole position in the wet, Fernando Alonso spent the whole race fending off the faster Red Bull drivers. With a few laps to go, Mark Webber had caught up and pulled off a mega pass around the outside of Brooklands to win his ninth and final grand prix. Alonso held on for second ahead of Sebastian Vettel.

2018 British Grand Prix
Sebastian Vettel was leading relatively comfortably when the safety car was deployed to clear up a heavy crash for Marcus Ericsson. Vettel opted to pit but Bottas stayed out, leaving Vettel 11 laps to try and find a way past. After some early probing moves proved ineffective, Vettel simply launched his Ferrari down the inside at Brooklands, grabbed the lead, and won the race. Bottas then dropped down the order further, firstly losing second to Lewis Hamilton (who’d recovered from the back after being spun by Kimi Raikkonen on the first lap) and then to Raikkonen himself. Max Verstappen was also in the fight for the podium until he was put out with brake failure. 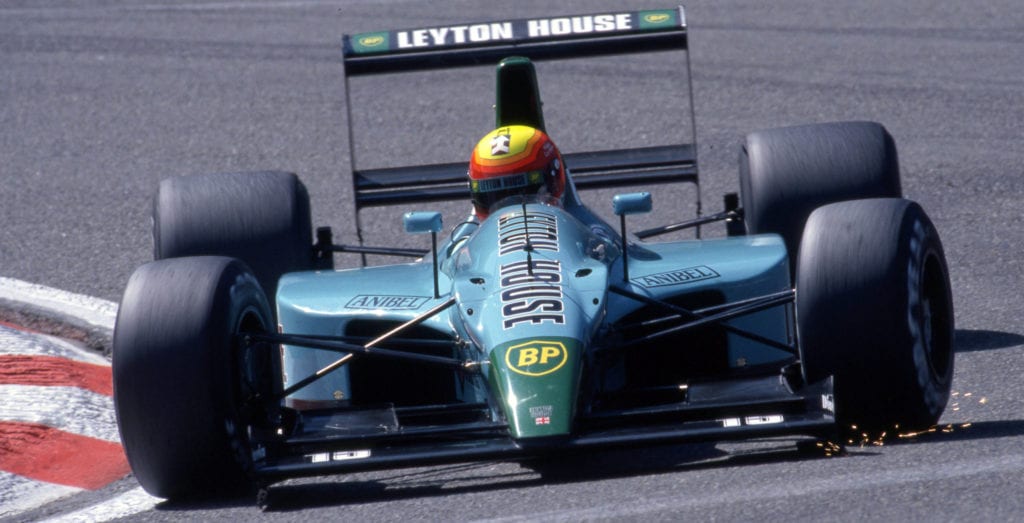