On This Day In F1 - Two Of The Greatest Drives In F1 History Took Place - WTF1
Skip to content
×
Formula 1 , On This Day

1957 German Grand Prix
Juan Manuel Fangio’s 24th and final win was also his greatest. He had been leading the race in his Maserati 250F when he came in for his planned pit stop, allowing the Ferraris of Mike Hawthorn and Peter Collins to take over at the front. However, even by the standards of the day the pit stop was woefully slow and his 30-second lead turned into a deficit of almost a minute with half of the race left to run.

Undeterred, Fangio went on a charge. Lap after lap, he broke the lap record and eventually went eight seconds quicker than his pole position time. He was taking chunks of time out of the Ferrari drivers and, with it being such a long lap, it was a long time before either could respond. Hawthorn passed Collins for the lead and built a gap, but it was too late – Fangio was coming. On the penultimate lap he passed them both to retake the lead and, despite having driven so hard that his seat had come loose, held on to win the race and with it, his fifth championship.

The 46-year-old had achieved the unthinkable – but the effort had taken such a toll on Fangio that he said he would never be able to drive like that again and he retired from racing the following year. 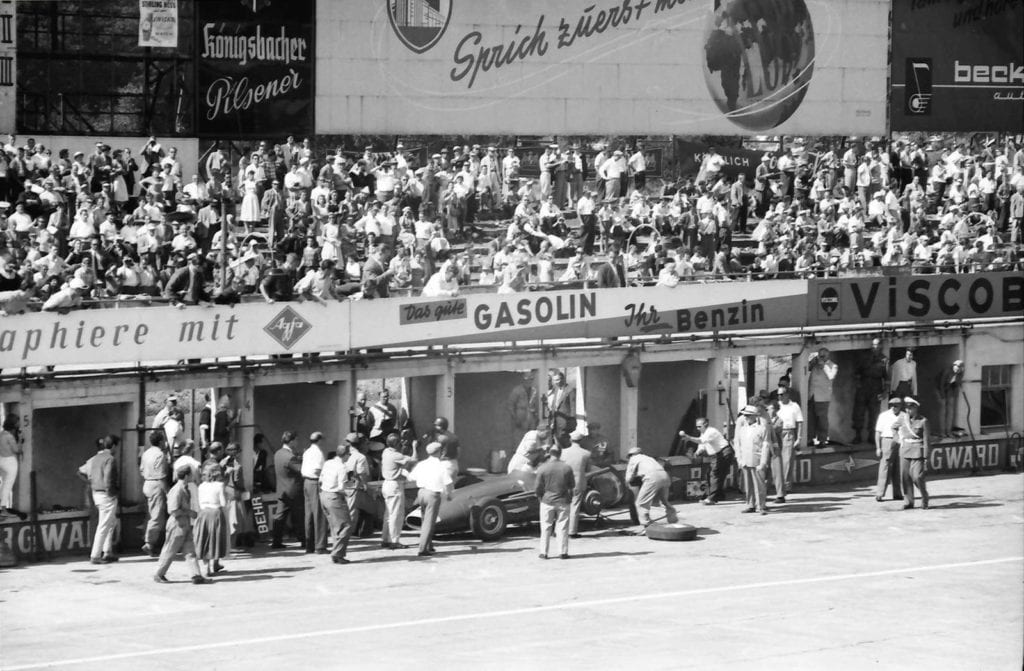 1968 German Grand Prix
11 years after Fangio had worked his magic, Jackie Stewart put in a similarly incredible performance at the Nordschleife. Driving with a broken wrist in the most intense rain and fog, he took the lead from Graham Hill towards the end of the first lap and immediately started pulling out a massive lead – eight seconds at the end of lap one, 34 seconds by the end of lap two. He was simply untouchable and at the end of the 14 laps won the race, a staggering four minutes ahead of second-placed Hill.

This was such an incredible race that we made a podcast about it. Want to know more? Then check out ‘That Time When: Jackie Stewart Won At The Nurburgring With A Broken Wrist’ by clicking here, or look us up on your preferred podcast platform.

1974 German Grand Prix
The top three drivers remained in the same position for pretty much the entire race – Clay Regazzoni won for Ferrari to take the championship lead, with Jody Scheckter second and Carlos Reutemann third. The other title contenders had a bad day – Niki Lauda crashed trying to overtake Scheckter on the opening lap, while Emerson Fittipaldi stalled at the start, got hit by Denny Hulme, and had to retire with broken suspension.

1985 German Grand Prix
Michele Alboreto came through from eighth on the grid to take what would be his fifth and final F1 win – a remarkable stat, given that at this point of the season he was the championship leader. Alain Prost finished second and Jacques Lafitte third as early leaders Keke Rosberg and Ayrton Senna dropped out with mechanical issues.

2019 Hungarian Grand Prix
Max Verstappen led much of the race from his first pole position as the faster Mercedes of Lewis Hamilton struggled to find a way past. So, with 22 laps to go, Mercedes decided to pit Hamilton for fresh tyres to see if it would make the difference: it worked. Hamilton was regularly between one to two seconds a lap faster and when he caught Verstappen with four laps to go, there was no contest – Hamilton executed an easy pass and went on to win.

Birthdays
John Fitch (born 1917) was a prolific (and successful) sportscar racer in the 1950s and also entered two grands prix, both at Monza. He retired from the 1953 Italian GP but managed to finish ninth (albeit last) in the 1955 race.