On This Day In F1 – Verstappen Became The Sport’s Youngest-Ever Winner – WTF1
Skip to content
×
Formula 1 , On This Day

1983 Monaco Grand Prix
Keke Rosberg made an inspired decision to start on slick tyres on a wet but drying track, taking the lead at the start and then building up a huge gap as his rivals had to make a pit stop. Lap after lap he drifted his way around the streets, and even when drivers in the by-now much more competitive turbo cars were on slicks, Rosberg continued to have the measure of them. Nelson Piquet ended up second and Alain Prost third.

1988 Monaco Grand Prix
A day after setting one of the most brutally fast qualifying laps of all-time – a staggering 1.4 seconds faster than teammate Alain Prost – Ayrton Senna threw the whole weekend away. He was leading by a mile from Prost when, with 11 laps to go, he had a lapse in concentration and smashed into the barriers at Portier. Prost carried on to win the race ahead of the two Ferraris of Gerhard Berger and Michele Alboreto while a distraught Senna disappeared off home and hid for several hours, only returning to the track later that evening.

1994 Monaco Grand Prix
The race was a sombre occasion after the events of Imola, and also as Sauber driver Karl Wendlinger had a horrible crash during practice which left him in a coma. The first two grid slots were also left open and painted with the colours of the Brazilian and Austrian flags as a mark of respect for Ayrton Senna and Roland Ratzenberger.

The race was fairly easily won by Michael Schumacher after Damon Hill and Mika Hakkinen collided at the first corner. The Peugeot engine in Martin Brundle’s McLaren lasted long enough for him to be able to finish second ahead of Gerhard Berger’s Ferrari in third, while Michele Alboreto managed to coax his Minardi around to finish sixth and score a point for the final time in his long career.

2016 Spanish Grand Prix
Red Bull was so keen to keep Max Verstappen on its books that ahead of the race the team decided to promote him up from Toro Rosso, demoting Daniil Kvyat back to Toro Rosso. In a remarkable race, both Mercedes drivers crashed into each other on the opening lap, leaving the race to be fought out between the Red Bulls and the Ferraris.

Both teams split their strategies – Verstappen and Kimi Raikkonen on two-stoppers, with Sebastian Vettel and Daniel Ricciardo stopping three times. It turned out that two stops were the way to go and as Vettel and Ricciardo played ping-pong in their battle for third, at the front Verstappen remarkably held off Raikkonen to win in a car he’d had minimal experience of. It also made him the youngest-ever grand prix winner, aged 18 years and 228 days. Meanwhile, the demoted Kvyat finished 10th and took the fastest lap as a consolation prize, probably wondering if that win might have been his…

Birthdays
Peter Broeker (born 1929) entered his own Stebro Formula Junior car into the 1963 US GP. Despite upgrading the car to F1 spec it was well off the pace and he qualified a distant last. He did make it to the end of the race in seventh place – albeit 22 laps down on race-winner Graham Hill and 11 laps behind the sixth-placed car.

Alan Rollinson (born 1943) entered the 1965 British Grand Prix in a Cooper, but withdrew after qualifying. 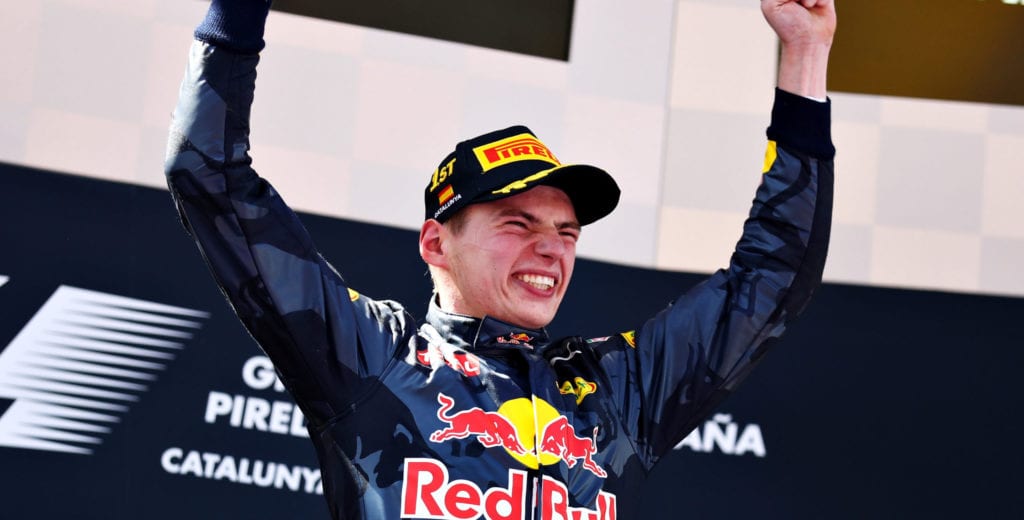