On This Day In F1 – Villeneuve Was Disqualified For Ignoring Yellow Flags – WTF1
Skip to content
×
Formula 1 , On This Day

1986 Mexican Grand Prix
Gerhard Berger took the first victory for the Benetton team, the combination of the hugely powerful BMW engine and not needing to stop for tyres ensuring he beat Alain Prost by 25 seconds, with Ayrton Senna in third the only other driver on the lead lap.

Nigel Mansell could have wrapped up the title but stalled on the grid and could only recover to fifth, one place behind teammate Nelson Piquet.

1997 Japanese Grand Prix
During a practice session, Jacques Villeneuve set his fastest lap during a time when yellow flags were out. It was the fifth time he’d committed such an offence all season and as a result, he was straight-up banned from taking part in the race.

He was eventually allowed to race under appeal and did his best to try and hinder Michael Schumacher’s race, but to no effect. With a little help from Eddie Irvine, Schumacher was able to win just ahead of Heinz-Harald Frentzen while Villeneuve could only manage fifth. The appeal failed and he was disqualified anyway, meaning Schumacher took a one-point lead into the season finale at Jerez. Williams also secured the constructors’ title at this race – to date, the team’s last such success.

2003 Japanese Grand Prix
Michael Schumacher was in prime position to win a record sixth title, yet he surprisingly seemed to do his best to throw it away. He only qualified 14th and had a clumsy race – at one point he lost his front wing in an optimistic attempt to pass Takuma Sato, and later was lucky to survive a collision with brother Ralf.

He stumbled home to finish eighth, enough to beat Kimi Raikkonen (who finished second behind Rubens Barrichello) to the title by two points. Juan Pablo Montoya’s early retirement from the lead also meant that Ferrari won the constructors’ championship for the fifth year in a row.

2008 Japanese Grand Prix
This was the last time the Japanese GP was held at Fuji and it was a real penalty-fest. First, Lewis Hamilton was caused mayhem at the first corner, even though he didn’t actually hit anyone. That put him into a battle with Felipe Massa, who collided with Hamilton while battling for position. Both were given drive-through penalties for their separate incidents.

Later on, Sebastien Bourdais was exiting the pits and attempting to stay ahead of Massa when the two made contact, spinning Massa. It looked very much like it was Massa’s own fault, yet after the race the stewards decided to give Bourdais the penalty, dropping him from sixth to 11th and promoting Massa up a position, much to the confusion of everybody.

With Hamilton only finishing down in 11th it meant his championship lead was cut to five points with two races still to go.

In among the madness, Fernando Alonso managed to grab his second win of the season for Renault as Robert Kubica finished second. Kimi Raikkonen, who’d lost out at the start as a result of Hamilton’s aggression, was third, while Nelson Piquet Jr put in a strong drive to go from 12th to fourth. He clearly wasn’t too badly affected by his crash in Singapore…

2014 Russian Grand Prix
The first race in Sochi was something of a borefest as tyre degradation proved to be virtually non-existent – as Nico Rosberg proved. He had a horrendous lock-up trying to pass Hamilton on the first lap, flat-spotting his tyres in the process. He pitted at the end of the first lap but easily made his way back up to second without having to stop again, despite doing most of the race on a single set of tyres. Hamilton won from Rosberg, with Valtteri Bottas finishing third and taking his first career fastest lap in the process.

Birthdays
Piero Taruffi (born 1906) drove 18 races in the 1950s, mostly for Ferrari. His best season was in 1952 when he won the season-opening Swiss GP and scored two other podiums to finish third in the championship.

Paul Hawkins (born 1937) started three races in 1965 with a best finish of ninth, but is most famous for being one of two drivers (the other being Alberto Ascari) for ending up in the Monaco harbour after a crash.

Bertil Roos (born 1943) started just one race – his home grand prix in Sweden – in 1974, but the gearbox on his Shadow broke just two laps into the race. 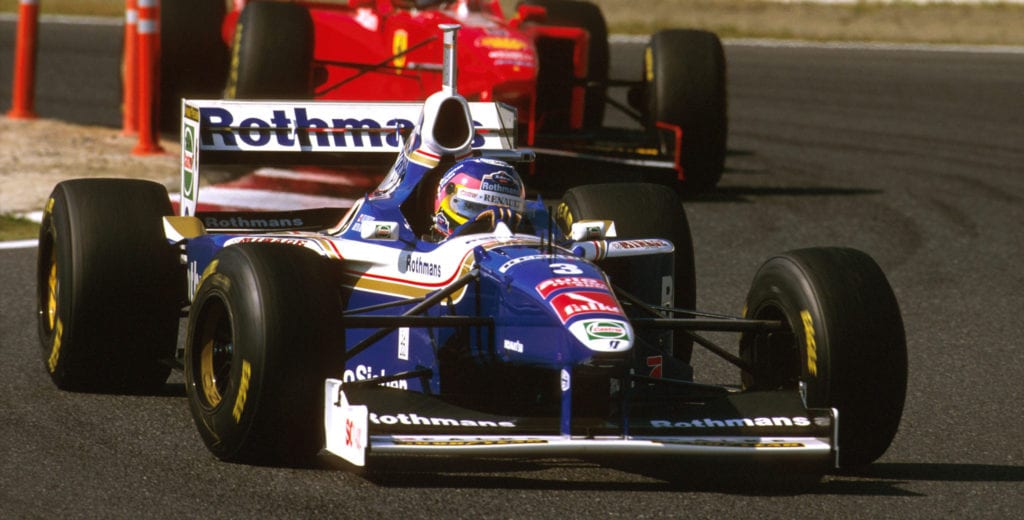