1964 British Grand Prix
The first British GP to be held at Brands Hatch was won by Jim Clark, with Graham Hill close behind in second. John Surtees finished third for Ferrari to make it an all-British podium.

1999 British Grand Prix
Michael Schumacher was passing teammate Eddie Irvine into Stowe on the opening lap when his brakes failed. Schumacher went straight into the barriers at a fair rate of knots, breaking his leg and ruling him out of most of the reason of the season – and with it, the championship battle.

David Coulthard won the race after Mika Hakkinen lost a wheel, with Irvine finishing second and Ralf Schumacher third. Damon Hill had a decent race to finish fifth for Jordan – before the race, he’d been considering making this his final grand prix but, having had such a solid drive, elected to see out the rest of the season. During the pit stop phase he even led a lap, the last time he would do so in a grand prix.

2004 British Grand Prix
Michael Schumacher cruised to a 10th win in 11 races, beating Kimi Raikkonen (who put McLaren on the podium for the first time all season) and Rubens Barrichello. Jarno Trulli had a lucky escape when the suspension failed on his Renault coming out of the high-speed Bridge corner, pitching him into the barriers before barrel-rolling through the gravel.

2010 British Grand Prix
Tensions at Red Bull went up another notch in the build-up to the race – the team had a new front wing for both cars, but Sebastian Vettel’s failed during the final practice session. The team therefore took the controversial decision of removing the new wing from Mark Webber’s car and giving it to Vettel, leaving the Aussie to deal with the theoretically slightly worse, old-spec wing. The team’s explanation was that Vettel was higher in the championship at that stage, but many (including Webber himself) saw it as plain favouritism.

Vettel took pole for the race ahead of a fired-up Webber, who battled his way into the lead at the first corner. In the process, Vettel ran off the circuit and picked up a puncture, dropping him to the rear of the field. Webber rocketed ahead to take the win and, on the cooldown lap, let rip one of the sport’s most memorable team radio messages: “Not bad for a number two driver”. Lewis Hamilton finished second with Nico Rosberg third, while Vettel was only able to recover to seventh.

Birthdays
Fritz Riess (born 1922) started his only grand prix at the Nurburgring, where he finished seventh – the highest of the numerous one-off German entries for the race.

Alberto Uria (born 1924) entered the Argentine GP in 1955 and 1956, finishing 10th in the latter year in a shared drive with Oscar Gonzalez.

A bit of a journeyman driver in the 1970s, Rolf Stommelen (born 1943) had some good results in his first full season in 1970 (including a podium in Austria). From then on he raced occasionally for a number of privateer outfits and started his 54th and last race in 1978 for Arrows, by which point he’d started to focus more on sportscar racing. 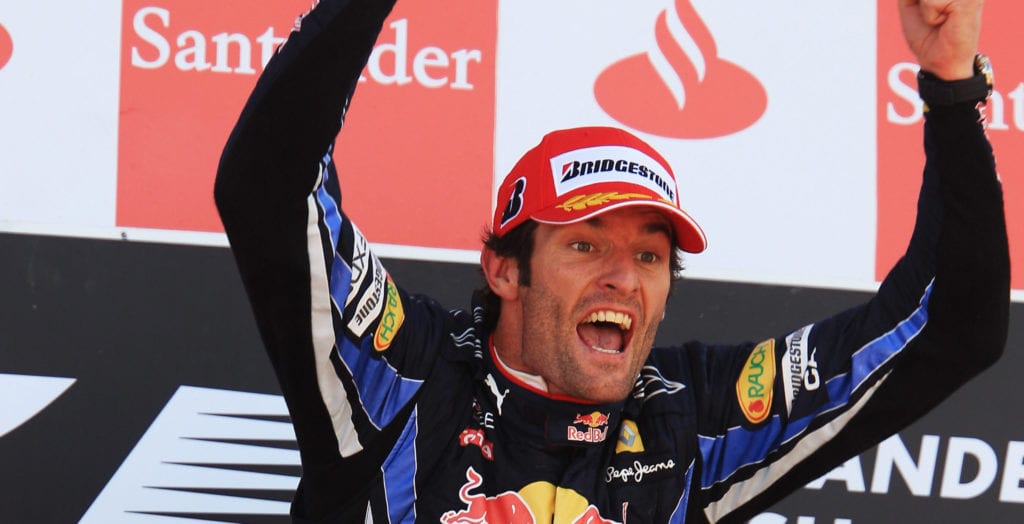