1984 British Grand Prix
Niki Lauda took the win after teammate Alain Prost dropped out of the lead with a gearbox failure at half-distance. Nelson Piquet had been on course to finish second until he lost pace with engine issues, eventually causing him to drop to seventh. That promoted Derek Warwick up to second in his home race and Ayrton Senna to an impressive third in his Toleman, this time not needing to rely on the weather for a strong result.

2007 European Grand Prix
The race plunged into utter chaos when the heavens opened on the Nurburgring at pretty much the exact moment the lights went out. This meant that pretty much everyone pitted at the end of the first lap to fit intermediate tyres, although the track was so treacherous that Kimi Raikkonen actually understeered out of the pit entry and back on the track, forcing him to complete an extra lap on slicks.

One man that didn’t pit, however, was Spyker’s Markus Winkelhock. He was making his F1 debut in place of Christijan Albers, who’d defaulted on a sponsor payment. Winkelhock had qualified last, but with rain on the horizon and nothing to lose he came into the pits at the end of the warm-up lap and bolted a set of wet tyres on. It turned out to be the perfect strategy, as with the rest of the field either running off of the track or having to pit he was able to take the lead on lap two.

From the pit lane. In a Spyker. On his debut. At his home race!

The rain worsened and the first corner turned into a lake. Jenson Button, Lewis Hamilton, Scott Speed, Anthony Davidson, Nico Rosberg, Adrian Sutil and Tonio Liuzzi all aquaplaned off. Liuzzi had a lucky escape – he narrowly missed hitting the safety car and did hit a recovery vehicle, though thankfully at very low speed.

Winkelhock meanwhile was sauntering off into the lead. His lead at the end of lap two was 19 seconds, and on lap three he was more than half a minute ahead. Could his mega gamble be about to result in the most improbable win of all time?

Unfortunately not. With the chaos at Turn 1, there was no option but to first send out the safety car and then red flag the race, and Winkelhock’s massive advantage was wiped out.

When the race was restarted the track had dried out enough for inters to be the correct tyre, but Spyker took another gamble and left Winkelhock on full wets in the hope it’d start to chuck it down again.

This time however it was the wrong choice, and as he led the field at the restart he was almost instantly swallowed up. He dropped down the order and a few laps later his hydraulics failed, putting him out of the race.

For the rest of the race, Felipe Massa stamped his authority on things ahead of Fernando Alonso but towards the end of the race rain started to fall again. Everyone would have to pit for intermediates and in these conditions, Alonso was the quicker man.

Five laps from the end he pulled off a mega pass for the lead (with a bit of contact) around the outside and went on to win, leaving Massa second and Mark Webber a superb third. Massa wasn’t happy and there was a bit of an argument about it in the cool-down room, but it had been a great bit of racing. For the first time in his career, Hamilton finished off the podium and out of the points: as well as being caught out by the lake at the first corner, he ended up on the wrong end of some tyre gambles which left him a lap down in ninth.

But despite the exciting finish, the was no doubt that Markus Winkelhock and Spyker were the stars of the show. Sadly for Winkelhock it would also prove to be his last race as Sakon Yamamoto took over the seat for the rest of the season. Still, ending his F1 career with 13 laps driven (six of which were in the lead) has made him a cult hero.

2012 German Grand Prix
Fernando Alonso again made the most of wet conditions in qualifying to put his uncompetitive Ferrari on pole (for the 22nd and last time in his career) and drove a controlled race to take the win. Although Sebastian Vettel and Jenson Button behind him seemed to be quicker overall, Alonso managed to cleverly use his KERS to remain just out of the one-second window in the DRS zone and win his third race of the season.

Vettel managed to pass Button for second at the end of the race but was given a penalty for exceeding track limits in the process, dropping him to fifth and promoting Kimi Raikkonen onto the podium.

2018 German Grand Prix
Sebastian Vettel appeared to have the race in his pocket when things were shaken up by a brief mid-race rain shower. Pushing to build up a gap on a damp track with work slick tyres, he made a slight error going into the stadium section and crashed out of the race. To make matters worse, title rival Lewis Hamilton – who’d started 14th after problems in qualifying – made the most of his strategy (and a lucky escape after cutting the pit entry line) and claimed an unlikely win after team orders stunted the challenge of a feisty Valtteri Bottas.

Birthdays
Dorino Serafini (born 1909) finished second for Ferrari at the 1950 Italian GP in a shared drive with Alberto Ascari. This turned out to be his sole start, leaving him as the only F1 driver to have a 100 per cent record of finishing on the podium. 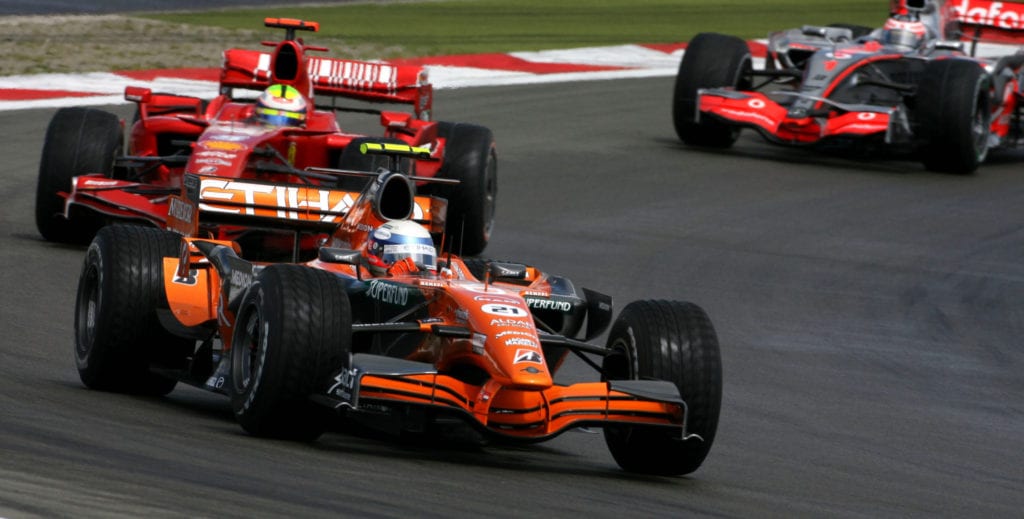