On This Day In F1 – Wurz Went Through The First Corner Upside-Down – WTF1
Skip to content
×
Formula 1 , On This Day

1953 Dutch Grand Prix
Alberto Ascari took a reasonably dominant win after most of his main competitors hit problems. Luigi Villoresi had throttle issues, Juan Manuel Fangio dropped out with axle issues – a fate that also befell teammate Jose Froilan Gonzalez. However, Gonzalez took over Felice Bonetto’s car and charged back through the field, beating Mike Hawthorn to finish third behind Ascari and Giuseppe Farina and denying Ferrari from sweeping the podium.

1970 Belgian Grand Prix
The last race around the fearsome ‘Old Spa’ was somewhat surprisingly won by Pedro Rodriguez. Although his BRM’s V12 engine produced plenty of power the car wasn’t exactly competitive the team hadn’t won a race for four years. However, Rodriguez was something of a Spa master and made his way through the field from sixth on the grid, passing Jochen Rindt, Jackie Stewart and Chris Amon to take the lead on lap five and never looked back. Amon finished a close second with Jean-Pierre Beltoise third in what was Rodriguez’s last win – and the last win (to date) by a Mexican driver in F1.

1998 Canadian Grand Prix
The race was dominated by two enormous accidents at the first corner on the first lap. At the first start, Alex Wurz ran into the back of Jean Alesi, causing his Benetton to tumble down the inside and wipe out Johnny Herbert and Jarno Trulli as well. The race was red-flagged, allowing all four to take the restart courtesy of their team’s spare cars (or some quick repairs by Sauber, in Herbert’s case).

For Trulli and Alesi they may as well not have bothered because at the second start, they became involved in another incident. Ralf Schumacher spun ahead of them, Alesi slowed down and an unsighted Trulli went into the back of him, mounting the Sauber in the process. This time the safety car came out to clear up the mess, but all three drivers – as well as Mika Hakkinen and Tora Takagi, who both had gearbox problems – were out.

David Coulthard led the early stages until he retired, at which point an accident between Mika Salo and Herbert brought out the safety car. Michael Schumacher pitted and upon exiting the pit lane (which came out before the first corner in those days) he shot across the racing line, causing Heinz-Harald Frentzen to crash out. Schumacher was given a stop-go penalty and it was largely because of this incident that F1 introduced white lines at the pit exits to prevent cars from dangerously rejoining the racing line.

This left Giancarlo Fisichella in the lead, but he didn’t have the pace on his one-stop strategy and Schumacher comfortably overhauled him to win ahead of Fisichella and Eddie Irvine, with Wurz – despite his flying antics at the start – able to come home fourth. The highly-rated Jan Magnussen finally scored his first F1 points after a season and a half with Stewart, but it was too little, too late – he was fired ahead of the next race.

2009 Turkish Grand Prix
Although Brawn had completely dominated the season up to this point, by now it was beginning to become clear that the team’s lack of money was costing it in the development race and Red Bull was catching up. Sebastian Vettel took pole and got away from the line in the lead – crucial, given that he was running a three-stop strategy compared to Jenson Button’s two.

However, Vettel then ran wide coming out of Turn 10, handing Button the lead. Button made the most of it, too, going on to win for the sixth time in seven races ahead of Vettel with Mark Webber third – amazingly, he wouldn’t win again for the rest of the season, and only made two more visits to the podium.

2015 Canadian Grand Prix
Lewis Hamilton beat Nico Rosberg to win his fourth Canadian Grand Prix, with Valtteri Bottas completing the podium in third. Much of the excitement in the race was provided by Felipe Massa and Sebastian Vettel after both had to start towards the back following some qualifying issues – Massa came through to finish sixth, while Vettel ended up fifth, just four seconds behind Kimi Raikkonen, who’d spoiled his own chances of a podium with a spin at the hairpin. 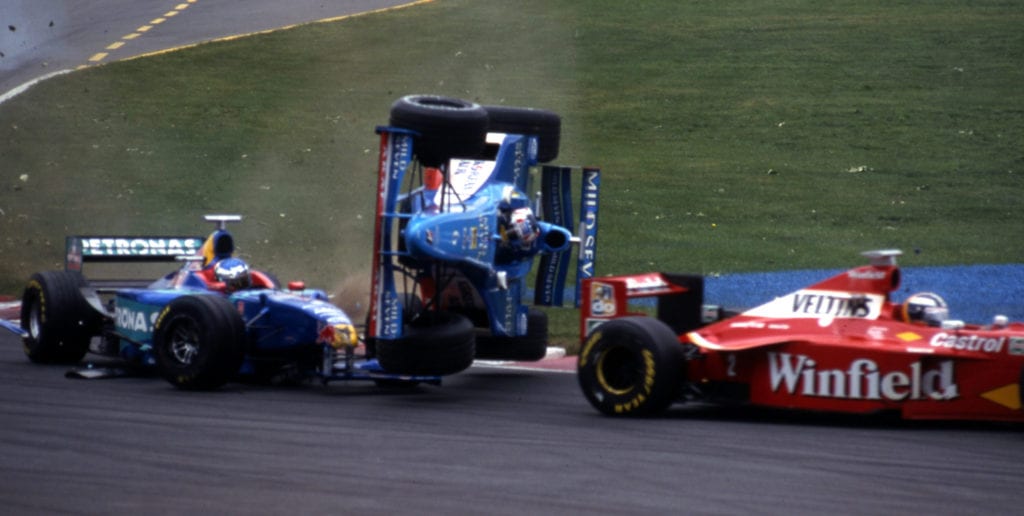