Pagenaud led well over half the race but the race was a constant battle against fuel mileage, while Rossi and his Honda powerplant made his way up through the field with some superb overtaking moves. It wasn’t all straightforward for him – some issues with backmarkers and a slow pit stop really fired Rossi up – but his mixture of pace and controlled aggression was always going to make him a contender.

The race was already shaping up nicely, but a multi-car pile-up triggered by Graham Rahal and Sebastien Bourdais brought out the red flags and ensured the race would boil down to a 15-lap shootout for glory.

This is the moment @GrahamRahal and @BourdaisOnTrack crashed at @IMS.

As Rossi and Pagenaud diced up front, 2017 winner Takuma Sato – who’d been a lap down at one point – was making his own typically attacking moved to climb up to third and at one point looked like he had the pace to win again. But he could only watch as the top two fought tooth and nail for the win.

Pagenaud got cleverly creative with his racing lines, running tight out of Turn 4 both to break the tow and give Rossi a big dose of dirty air. It also allowed him to easily cover the inside line, where Rossi had been strong all race.

There were a couple of times where Rossi got ahead but Pagenaud always had an answer. After taking the lead again with a lap to go, on the final tour he pulled off a couple of big tow-breaking weaves which proved enough to let him keep the advantage to the line, becoming the first driver to win the Indy 500 from pole since Helio Castroneves in 2009.

Watching @AlexanderRossi and @simonpagenaud go to battle was an absolute treat.

And to think, just 6 days until we’re back on track at the @detroitgp 💯 #INDYCAR // #Indy500 pic.twitter.com/SU1PE0PfIC

An ecstatic Pagenaud then skipped the traditional drive to victory circle and instead stopped on the yard of bricks on the pit straight to bring his celebrations closer to the fans.

A month ago, he was under pressure to keep his seat at Penske. Now, he’s won the Indy GP, taken pole for the 500, won that too, and is now just one point away from the championship lead held by teammate Josef Newgarden (who finished fourth).

A driver reborn? Absolutely. And what a way to do it. 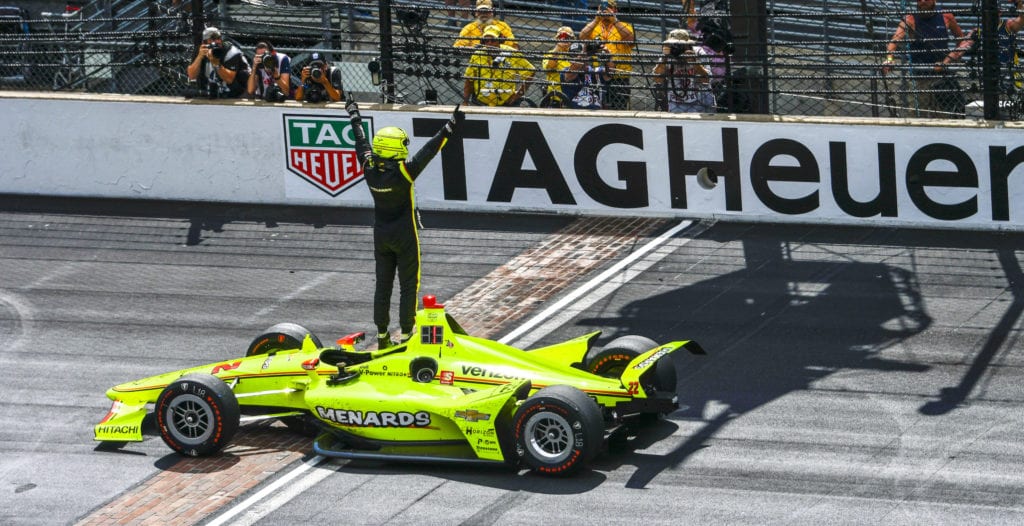