People Are Becoming Genuinely Concerned About The Current State Of F1

When we complain that a race is boring or that X, Y, and Z is wrong with the sport and needs to be changed, it’s not because we don’t like the sport and that we enjoy rinsing it. Quite the opposite, in fact – we utterly adore F1 and want to see it be the best version of itself that it can be. Unfortunately, cars that can’t follow each other, huge gaps between teams, the same team winning for the sixth season in a row and genuine concern that Mercedes could possibly – and realistically – win every single race this year is not the Formula 1 many of us want to watch.

For a while now, the 2021 regulations appear to be this magical light at the end of the tunnel which will fix everything, but that’s still 18 months away – a long time to wait, especially if races like the French GP become the norm. But even when those regulations do appear, it’s starting to look less and less like the great cure-all that was predicted, and more and more like simply a bigger sticking plaster to cover up fundamental problems.

The risk is that even when the 2021 rule changes come into effect, everything stays pretty much the same as it is at the moment. And at the moment, many people withing the F1 fraternity are concerned about the sport they work in, have competed in, and love.

But in no way is this a race.

Over the last two days I’ve commentated on two races. For the first time ever in FE, the top 3 on the podium were the top 3 on the grid. I’m not saying one is better than the other, I’ve loved F1 since I was 6, but it is undoubtedly a stark contrast compared to today’s race.

I think we’ve now reached (and well passed) the point where some F1 folks are blithely defending the elegant design and cut of the cloth of the emperor’s nonexistent wardrobe.

OK, give me some positives from the current situation in F1?

Sports Writer for The Telegraph, Oliver Brown, wrote a damning article saying that the French GP “did a disservice to the very concept of motor racing.” With Formula 2 and 3 putting on excellent races at the same circuit and IndyCar treating us to gem of a race at the fabulous Road America (yes, Alexander Rossi won by half a minute, but it’s still in nowhere near the same league of boredom as the French GP for a multitude of other reason), it’s hard to disagree.

Even after winning the race himself, Lewis Hamilton admitted that he understood why the situation was boring and that something needs to change, saying to Motorsport.com:

“We don’t write the rules.We have nothing to do with the money shift and all that stuff. You should put the pressure on the people that are at the head, that should be doing the job. I think they are trying to. But for many, many years they’ve made bad decisions.”

These ones [the French GP] are not the ones people enjoy most. I think it’s important for people to realise it’s not the drivers’ fault. This is a constant cycle of F1 for years and years and years, even before I got to F1. It’s because the way Bernie [Ecclestone] had it set up, the decisions they were making back then. It’s still the same and until that structure changes it will continue to be the same in my opinion.

Whether you agree with @oliverbrown_tel or not, the fact that today’s #FrenchGP caused him to write this, despite his being a man who loves #F1 with heart & soul, tells you all you need to know about how urgent it is that F1 reinvents itself not only rapidly but radically too. pic.twitter.com/lX9GRp299A

Wrong. F1 testing is more exciting than this.

#F1 u really need to get your act together. Its supposed to be motor RACING. Also known as motor SPORT. Its neither racing or sport at the moment. You know overtaking is an issue, you know the playing field needs to be evened out. Stop dithering and make the tough decisions now.

Made a big mistake. Just starting watching @Indycar. You won't believe this but there is grass at the edge of the track and cars are overtaking each other. Side-by-side through corners, banging wheels, opposite lock … think it's something called motor RACING!!

F1 talking about solving everything in 2021 reminds me of when you say you'll start going to the gym next year.

Nobody is saying that F1 isn’t allowed to have boring races. Every single season has had bad races. The problem at the moment is that the scales have tipped heavily in favour of the snoozefests – and to make things worse, it’s the same order of teams in each boring race. We might be less inclined to moan about the bad races if the results were at least different, therefore contributing to a championship battle (see: the 2007 season), but it’s just not happening.

For me, the worst thing about the French GP wasn’t that it was a dull race. It was that by the end of the first lap, you knew it was going to be bad. Yeah, there was some action in the midfield, but no matter how good a battle for seventh is, it’s hard to get even a fraction as excited over that as it is over a battle for a win or even a podium. Therefore, you just spend an hour and a half watching, hoping for something to happen, but secretly knowing that without some sort of massive left-field interjection, like a rainstorm, multi-car pile-up or a random Maldonado insertion, it just won’t.

And it’ll be the same thing at 80 per cent of the races for the rest of this season. And again the following year, rinsing and repeating the same scenarios and expecting something different. All of which is broadly similar to the old cliché about the definition of insanity.

What adds to the frustration is that F1 has all the right ingredients. The fast cars, the historic teams, the exotic locales, the engineering excellence, the reputation as the pinnacle of motorsport, and many of the best drivers in the world.

All the ingredients are there to make a delicious cake. At the moment, we’ve got a collection of stale leftovers covered up by flashy decorations. It’s time to start again – and it has been for quite some time. 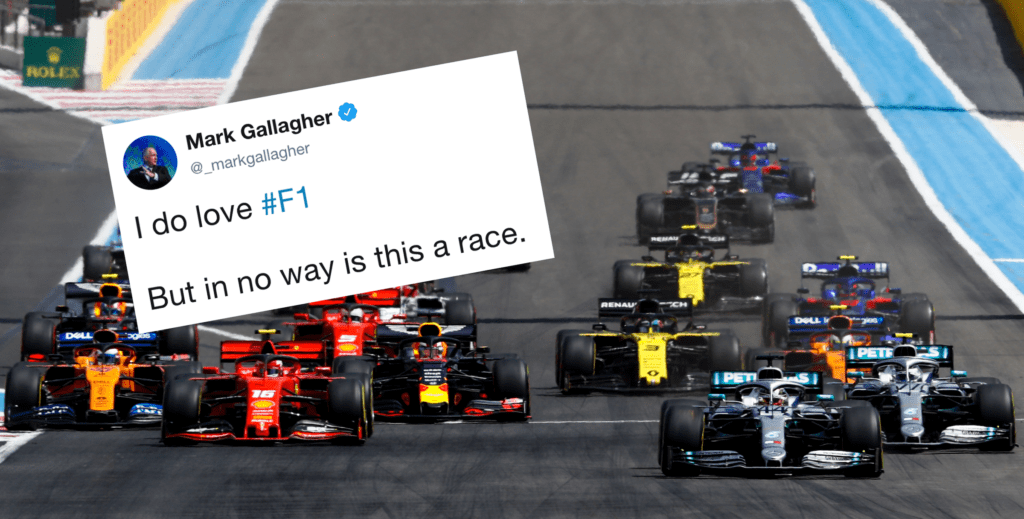