It was already pretty cool that we got to see the Alfa Romeo earlier than expected when photos of the car performing a shakedown appeared online.

But aside from the neat testing livery and the fact just seeing the car was unexpected, one aspect of the car has got everybody talking – the front wing.

There are new regulations for front wings this year (among other things). They’re 200mm wider, 20mm higher, have fewer elements on the upper and lower surfaces and also have simpler endplates, all in the name of improving the racing. We’ve seen them on all the cars launched so far and generally speaking, they all look rather similar and somewhat simple. They’re obviously not, but you get the jist.

However, the Alfa Romeo’s front wing is considerably different – bizarrely, there appears to be an entire chunk missing between the elements and the endplates.

#F1 A strange Front wing on the @SauberF1Team today in #Fiorano #TechF1 there are components in the outer area #TechnicalF1 #AlfaRomeo pic.twitter.com/CAhsvOzUf7

I think Alfa Romeo is not showing the complete front wing. That empty space… 🤔 They are hiding something.

What's up with that front wing? It's cut in half on both sides

Yeah, that’s certainly very different from anything we’ve seen from other teams and probably the most intriguing bit of aero development so far – that’s if it even is an aero development.

There are a few possible reasons why the Alfa’s front wing looks like it does.

Toro Rosso showed something similar apparently. Either they both came up with some crazy loophole that no one else thought of, or the big teams are trying to fool each other pic.twitter.com/0VzykSre4A

Which one of those is closest to the mark? Or is there an entirely different reason? I’d say all will be revealed in testing next week, but given the secretive nature of F1, chances are it might not be! 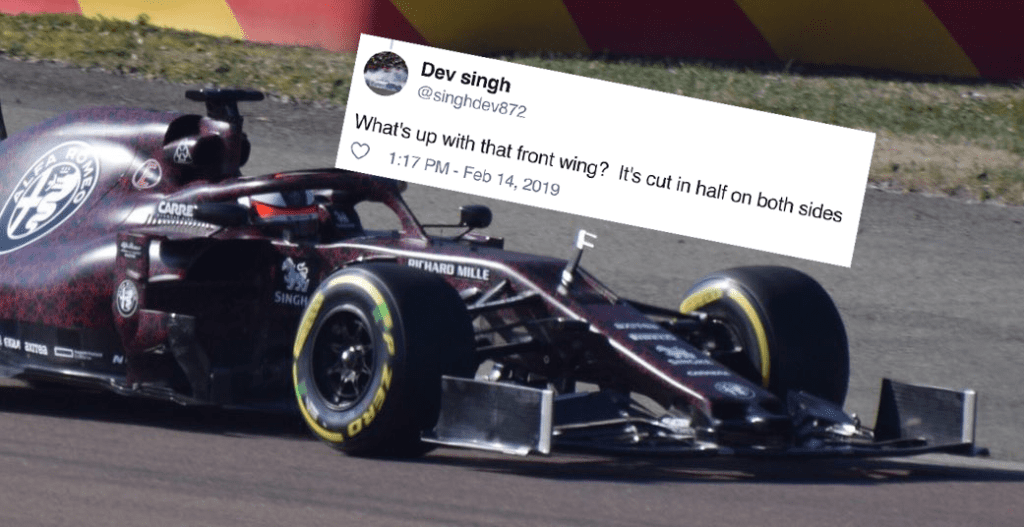