A week ago, Perez was enjoying a rare run in Q3 as he dragged his Racing Point to an excellent eighth on the grid. Today, he not only dropped out in Q1, but ended up being outqualified by a Williams (of all cars) as he ended up 17th after a bit of a scuffle with Ricciardo’s Renault (though he’ll start 16th after Antonio Giovinazzi was given a three-place penalty for impeding Lance Stroll).

A big queue of drivers were trying to make space for their laps heading into the closing stages in Q1 and Ricciardo attempted to find a bit of room for himself by passing Kevin Magnussen and Perez. He got ahead of Magnussen but Perez wasn’t having any of it and fought off the Renault driver. It compromised both of their laps and Perez wasn’t happy about it, telling Sky Sports F1 afterwards:

“You see the car ahead, and everyone is just opening gaps. I think what Daniel tried there was very disrespectful, he screwed up his lap and my lap. I ended up starting my lap very close to Norris, I think Daniel was very close to me, so it was just a very bad say for us. I was having to push because it was the final corner, otherwise you start too close to him, and that meant I was too close to Norris.”

Ricciardo ended up qualifying 18th. Although there was no danger of running out of time for any of the drivers in the queue to start their lap, the Aussie said he was trying to find himself space without losing tyre temperature, adding that he and Perez “screwed each other”.

These outlap shenanigans have been increasing in frequency in recent times. As the dirty air effect becomes stronger, drivers are requiring bigger gaps to the cars in front of them and, with the hot weather, taking care of the tyres with a slow outlap has increased in importance.

There was a similar situation in China where Max Verstappen was unable to set a time due to drivers overtaking him on the outlap; Sebastian Vettel annoyed Romain Grosjean and Lando Norris for passing before the final corner in Bahrain, and in Monza last year Fernando Alonso and Magnussen got into it over the same sort of thing.

There’s a sort of unwritten rule among drivers that they won’t overtake each other as they’re building up to a lap, something Perez alluded to in the incident with Ricciardo:

“We all know traffic is tricky in Q1. We spoke about it in the drivers’ briefing and the importance of being respectful of each other. For me, it was quite disrespectful. He’s an experienced driver and I didn’t expect that from him. We know this track isn’t the best for us anyway, but now we’re really in a tough place for tomorrow. It’s been a bad day for us, so let’s hope it gets better in the race.”

Nobody likes to see someone have their qualifying lap ruined by another driver and for it to happen on an outlap seems even more senseless. With these sort of things happening on a seemingly increasingly frequent basis, you have to wonder if an unwritten rule is enough – perhaps there should be some kind of actual regulation to ensure that this sort of thing doesn’t happen. 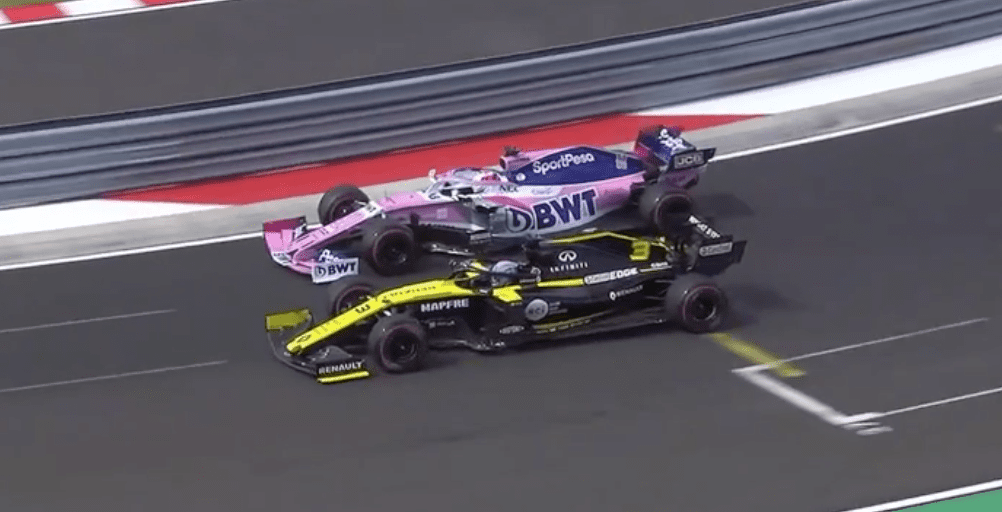