WELL DONE BAKU! The Azerbaijan Grand Prix didn’t disappoint with another crazy race proving why fans and drivers love this track. Sergio Perez took his first win for Red Bull in a mega drive where he didn’t put a foot wrong whilst the two championship contenders, Hamilton and Verstappen, didn’t even score points!

Joining him on the podium weren’t the usual contenders. There was no Bottas, not even polesitter Charles Leclerc. It was Sebastian Vettel taking his first Aston Martin podium and Pierre Gasly for AlphaTauri. Who could have predicted that?

The whole afternoon was something else, and here’s how it happened.

A FIGHT FOR THE LEAD STRAIGHT AWAY

Charles Leclerc was starting on pole after that mega qualifying yesterday with Lewis Hamilton and Max Verstappen in second and third. The top three kept their starting positions for the first lap, but Perez was on a mission from sixth place. By Turn 3, he was in fourth place ahead of Gasly and Carlos Sainz.

Leclerc, Hamilton, Verstappen, and Perez led the pack at the end of the first lap, but that looked set to change. Hamilton’s slippery, low-drag setup was proving very effective. At the end of Lap 2, without DRS, Lewis slipstreamed straight past Leclerc to take the lead, and it looked like he was going to pull away, but the Ferrari stuck with him. For the opening stages of the race it was a straight fight between Hamilton, Leclerc and Verstappen.

They got closer and closer together, and on Lap 7, Verstappen overtook Leclerc and could now pressure Hamilton. Immediately the lap later, Perez got past Leclerc too. Lewis now was leading with two fast Red Bulls bearing down on him. Exciting stuff.

Then came the pitstop phases. Hamilton pitted first of the top three, but he had to be held for longer than planned to avoid an unsafe release. Verstappen pitted the next lap and jumped Hamilton, as did Perez the next lap even though Checo had a long stop himself. As you would expect, that slow-release really hurt Lewis.

It was now a Red Bull 1-2. Hamilton had a few goes at Perez, but consistently he couldn’t get past. Red Bull was in complete control of the race.

Further back, Leclerc had been swallowed up by the pack and jumped by Gasly in the pits. Unfortunately, Sainz broke too late and had to take to the runoff at the castle section and got stuck way down the order behind the Alfa Romeos, who he couldn’t get back past.

Aston Martin was on a strategic mad one and did a completely different strategy to the rest by going long with Sebastian Vettel and Lance Stroll. Vettel was on softs and Stroll hards, and when the leaders pitted, Vettel led the race for the next eight laps until he pitted.

After pitting, Seb, who had started in 11th, was now in seventh place and closing on Leclerc and Gasly with an opportunity for another high points score for Aston Martin.

It stayed steady for a long time. Everyone was running their own race. Valtteri Bottas had been trying to get past Lando Norris at the tail end of the points, but he couldn’t, and much to the annoyance of his team. Bottas stayed in 10th place whilst his teammate pressured for the podium.

At the halfway stage of the race, it was becoming quite the procession, and it could’ve easily stayed that way. Nearly all the stops were completed, and the drivers were settling into a rhythm.

A PUNCTURE CHANGES EVERYTHING

But then a huge crash brought the field straight back together. Lance Stroll, who hadn’t pitted, had an almighty tyre failure at 180mph on the main straight and immediately brought out the Safety Car. He had been running his hard tyres for 30 laps.

Stroll hits the barriers on the main straight

The Canadian is ok and out of the car

Thankfully, Lance was alright and got out of the car quickly. There were concerns about whether the tyres that other teams were running would endure because Pirelli had predicted the hards to be fine for 40 laps. They believed that the puncture came from debris and other teams shouldn’t worry.

Max Verstappen aced the Safety Car restart and was way ahead of his rivals at Turn 1, but this didn’t help his teammate. Perez went defensive from Hamilton and managed to just about stay in front in Turn 1 and Turn 3, but Hamilton stuck with him, and for the next ten laps, he was all over the back of Perez.

The sheer slipstream effect that the Mercedes had was incredible, but Perez’s speed in the middle sector meant he could just about keep Lewis at bay when the 2.2km straight came around again.

The Safety Car let Vettel close in on his newer tyres, and he was able to get straight past Leclerc and Gasly to get into fourth. He was way ahead of the pack behind and was able to stick with Hamilton and Perez for a few laps before they dragged themselves ahead.

Max Verstappen was way ahead and had settled back into the lead. He had a five-second gap to Perez behind. He hadn’t put a foot wrong and was only a few laps off the win.

Then, out of nowhere, Max got a puncture!

His tyre just gave up on the main straight and was thrown into the wall at 200mph. His rear left tyre just burst, similarly to Stroll’s, and Max had no chance to save the car. So he was out of the lead and the race. Heartbreak.

The race was put under a Safety Car and then was red-flagged, with Red Bull’s requesting the FIA do so, so that every team could change tyres. Max’s puncture was nothing to do with debris. It was a pure tyre failure.

This had thrown the championship on its head. Verstappen was on course to get 10 points on Lewis, but now this had swung 18 points to Lewis if he could keep second.

How big will this moment be in the world championship fight? #AzerbaijanGP #WTF1 pic.twitter.com/A4RxPn9Kp1

would be restarted. It was then decided that it would, and the cars lined up for a standing start and a two-lap sprint shootout.

The top five were Perez, Hamilton, Vettel, Gasly and Leclerc.
It was all or nothing for many of the drivers, but this was a vital opportunity in the championship for Hamilton. He said to his team on the radio: “This is a marathon, not a sprint.”

At the restart, Hamilton got a mega launch and took the lead. But when it came to the braking, Lewis couldn’t stop, and he went straight on. Us fans couldn’t believe it. The lead went straight back to Perez, Vettel in second and Gasly in third. Hamilton was last!

Free from the Mercedes challenge, Perez waltzed off into the lead and controlled it to the end. Vettel did the same and nailed a podium for Aston Martin by finishing in second.

The fight for third was intense. Leclerc slipstreamed past Gasly but was too early on the straight. Gasly was able to tuck back in and get past again on the same straight! This invited Lando Norris into the fight, who had a brilliant restart launch, and he then had a look at Leclerc, who covered him off. Eventually, it was Gasly who came round to take a third podium for AlphaTauri in F1.

It was a mega race. It was all over the place featuring fierce fighting on track, cerebral strategy play early on and then just pure Baku madness to close it off. 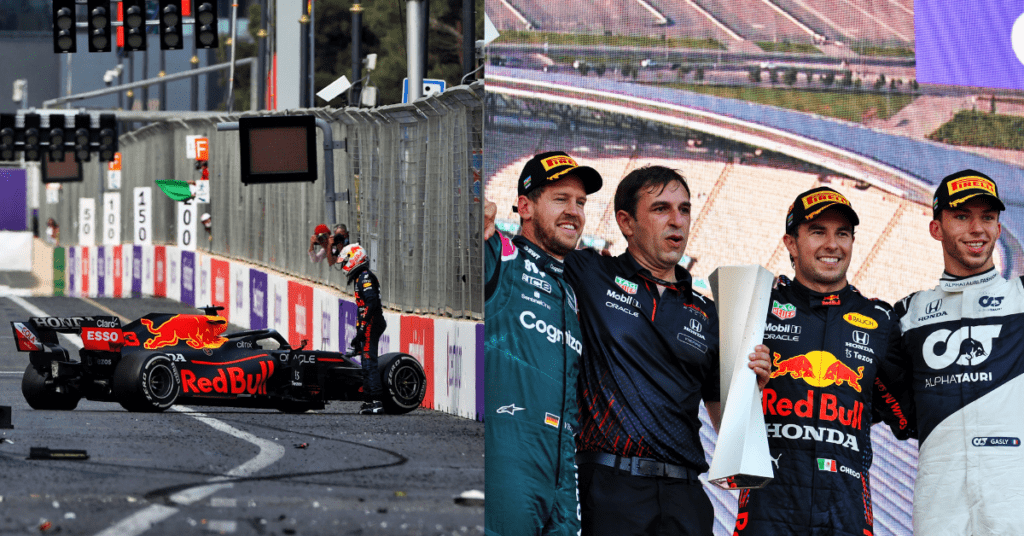