McLaren has had some iconic liveries over the years. Having taken part in their first F1 race way back in 1966, the team will celebrate 55 years in the sport this year. Insane! They have been home to some of the most iconic and special liveries during that time.

Going through old photos, we got thinking: what is the best McLaren livery ever? WTF1’s Editor Katy Fairman and Founder Tom Bellingham pulled in the help from two of our friends to share our thoughts on our respective favourites.

Surprisingly, some very famous liveries missed out on this list!

McLaren has had so many iconic liveries over the years, and a lot of that comes with nostalgia. The Malboro, West and Vodafone liveries are all iconic thanks to their success, as well as being they’re pretty good liveries. Still, from a pure design point of view, my favourite McLaren livery is something very recent.

Some of you probably already know I’m a big fan of orange, and I was glad the team returned to their historic orange colours; however, the first attempt in 2017 was a mess. Although in 2018 they got the papaya colour spot on, it’s more of a colour scheme than a livery. For me, 2019 is when they absolutely nailed it. I preferred it to the design they ran in 2020.

The orange is spot on, the blacked-out aero parts neaten up the whole look, and then they’ve used just the perfect amount of blue with a really awesome pattern in the geometric triangles. The way the blue is used at the rear even makes the car look less long, which is always a good thing with these modern cars.

Overall, I wouldn’t just say it’s my favourite McLaren livery, but it’s one of my favourite liveries ever. Full stop. McLaren has their work cut out to top this livery for me, as I think in 2019 they got it absolutely spot on. Chef’s kiss.

The obvious choice is the Marlboro or West liveries. Nevertheless, the repetition of these designs year after year nullifies them a bit for me.

For me, the best McLaren Livery of all time has to be the 2006 car. It epitomised everything that symbolised McLaren at that point as, well as being peak Ron Dennis: pushing the boundaries in technology and visual and maintaining a look of professionalism and modernity.

It almost perfectly matched the McLaren Technology Centre as a design object.

The fact that the chrome is painted still blows my mind today. I know how difficult that is, and to keep the weight down in today’s F1, let alone 2006, is incredible.

I prefer this edition over the later Vodafone cars, as the chrome seemed much richer and anodised compared to the more silver cars in the era that followed. The black airbrushed side pods also fit better than the Vodafone red in my opinion and make the car seem so much more menacing.

The complexity and groundbreaking uniqueness of this car puts it at the top of the list for me. It shows F1 breakthroughs can be achieved by the visuals and the livery, not just in performance and aero.

So, compared to the guys I’ve gone old school.

Despite picking the year 1991, I could just call the segment ‘the Marlboro days’. Alright, the iconic livery isn’t the most complex or risqué design out there – it’s actually incredibly safe – but it instantly comes to mind when I think of McLaren in F1.

I’m a big fan of the neon coral red that runs alongside the white on the livery, and when partnered with Senna’s bright yellow racing helmet brings so many memories to the surface. It’s simple, pure and not overly complex.

This livery stayed for an outstanding 16 seasons so, partnered with McLaren’s success, is why it is so immediately recognisable.

Although I love the papaya that we see on the modern cars, this iconic livery for me encompasses the incredible force McLaren was during its prime.

Normally, I would pick literally any livery from the Vodafone era. However, the 2020 livery really sets itself apart from the rest with the ‘We Race As One’ rainbow along the top of the halo and the car’s sides.

If you look close-up at the papaya orange with a good quality camera or in real life, the orange hue is absolutely gorgeous. I hope they keep it for a long time. The contrasting black text sponsors and numbers on the orange really is a nice touch too. There’s a good amount of sponsors on the car. It’s not too bare or stickered up to the nines like in NASCAR: well balanced.

What’s your favourite McLaren livery? Let us know in the comments. 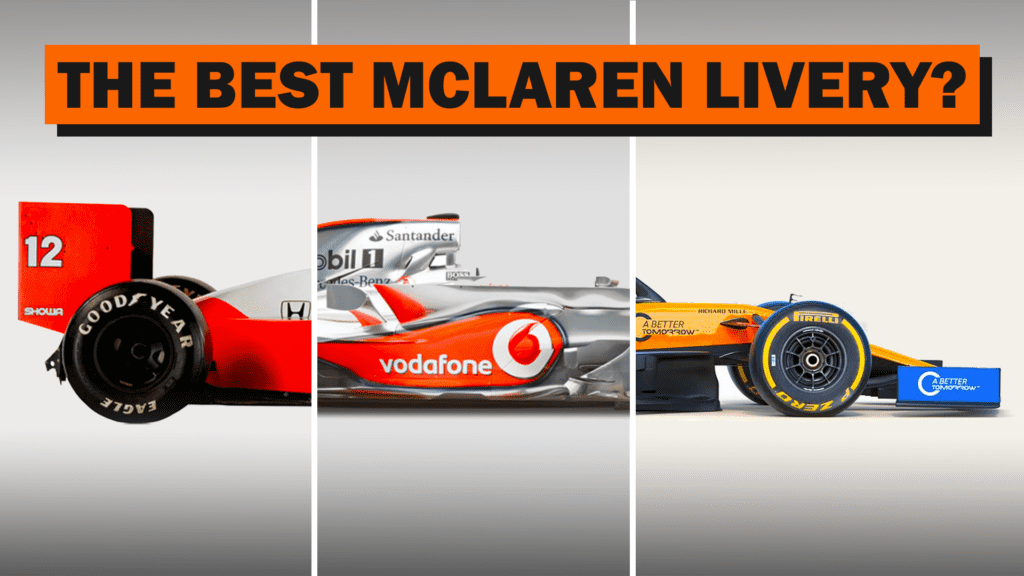