The Porsche 911 has a long and successful history in motorsport, and perhaps the most bonkers version was the 935 of the late 1970s.

First built for Group 5 rules in 1976, it repeatedly smashed all of its rivals and was even a match for bespoke prototypes – 935s won overall at Le Mans, Daytona, Sebring and countless other races and remained competitive well into the 1980s.

One of the most famous of all was the 935/78, better known as ‘Moby Dick’, which had an elongated body shape designed for maximum speed on the Mulsanne straight.

40 years on, Porsche has reimagined what a modern ‘Moby Dick’ might look like and, well, it’s utterly glorious.

It’s great fun spotting all the nods to the original 935 – the side vents, the red wheel fairings and of course, the Martini livery.

There’s plenty of modern stuff, too. The mirrors are from the current 911 RSR GTE car, the carbonfibre steering wheel from a 911 GT3 racer, and the rear wing endplates come straight from the Porsche 919 LMP1 car. It even has onboard air jacks and a modern automated fire extinguisher system.

The car is based on a modern 911 GT2 RS. That means it has a seven-speed dual-clutch transmission and a turbocharged flat-six engine which pumps out 690bhp. Interestingly, that’s actually less than the original car ‘Moby Dick’ had – that pushed out well over 800bhp in its day.

The cost? Well, Porsche is making just 77 of them, and each one will cost a smidge over €700,000, plus VAT. Given that they aren’t eligible for any championships or road legal, that’s a lot for what amounts to a collectable track toy.

You have to admit though, it’s damn cool. Here it is in a rather menacing shade of black being put through its paces at Monza.

We’d love to see more modern takes on legendary old race cars – especially if they turn out as good as this one. 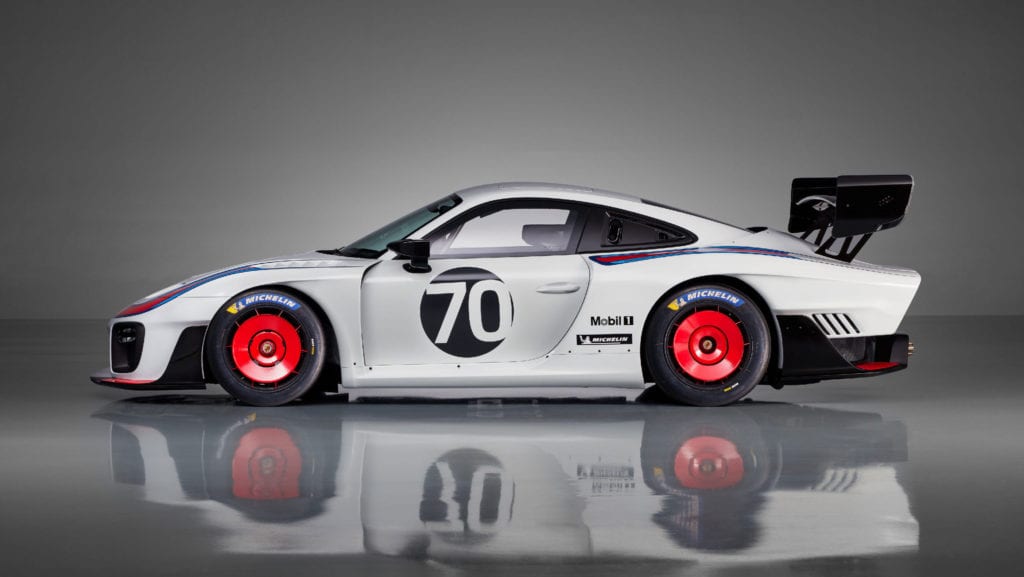