Porsche Has Come Up With Another Magnificent Retro Livery For Its GT Cars – WTF1
Skip to content
×
Design , GT , Retro

In case you haven’t noticed, Porsche has been doing some rather tasty stuff with its racing cars this year. There’s been the record-shattering 919 Evo, the Pink Pig/Rothmans liveried 911s for Le Mans, and a modern take on the classic 935 ‘Moby Dick’.

It’s all in the name of the company’s 70th anniversary and ahead of this weekend’s Petit Le Mans at Road Atlanta, Porsche has come up with another incredible throwback livery for its 911 RSRs, this time paying homage to the 911 GT1. And damn, does it look good.

It’s based on the livery of 1998 version of the car which won the 24 Hours of Le Mans that year, complete with the red and yellow flashes on the front to tell the two cars apart.

The red-flashed No.911 will be driven by Patrick Pilet, Nick Tandy (Great Britain) and Fred Makowiecki as they look to add to their class win at the 12 Hours of Sebring earlier this year and possibly win the North American Endurance Cup.

The yellow-flashed No.912 will be driven by Earl Bamber, Laurens Vanthoor and Mathieu Jaminet, with Vanthoor and Bamber in with a shout of winning the GT Le Mans title.

The cars look mighty fine in their retro colours – let’s just hope they don’t suffer the same fate as the actual 911 GT1. At the inaugural Petit Le Mans in 1998, Yannick Dalmas’ car did a spectacular backflip…

It actually makes us kinda sad that we’re rapidly nearing the end of 2018 – after all, there are so many more awesome retro Porsche liveries that need to be remastered. Perhaps those will have to wait for the 75th anniversary. 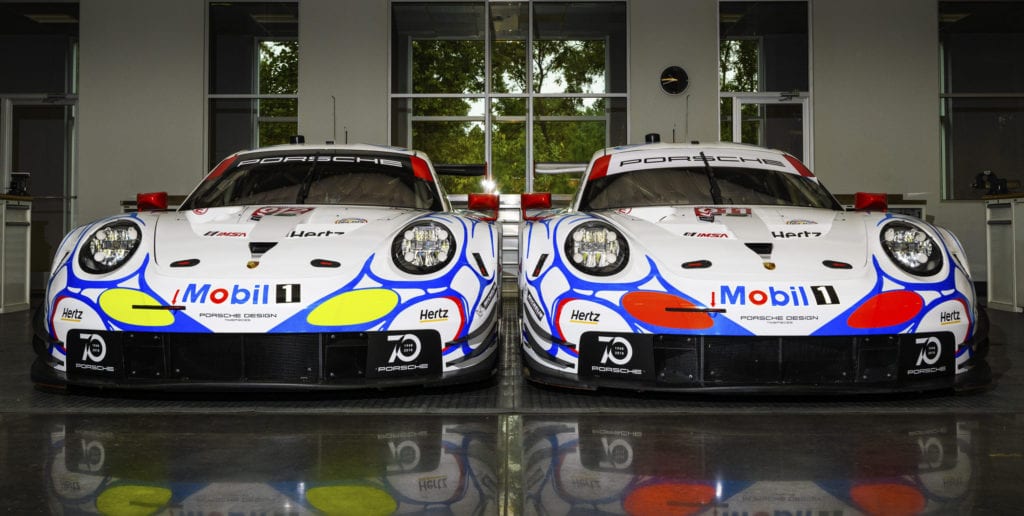