As fans, we’re simply armchair experts speaking from the heart with nothing more to go on than what we’ve seen on the TV.

Racing drivers, on the other hand, know a thing or two about racing situations and the response from across the motorsport world seems to be in collective disbelief about what just happened.

Just saw some highlights of the Canadian GP. What a joke of a penalty for Vettel. Stop killing the racing you twats. Unreal.

That’s ridiculous 5 seconds penalty,Seb did well not to hit the https://t.co/f2onSfj4Bl GRIP ON GRASS !
No room on track there.Great driving from Lewis.

What’s Seb supposed to do?Crazy ,the car stepped https://t.co/ybVmo5UkQL that point he was a passenger.

my observation on Vettel rejoining: his helmet moved to look into mirror only after steering correction! that he slid that far is laws of physics. No space for Lewis is name of game with street tracks. What happened to #LetThemRace ? Was it sketchy? yes! a penalty? not in my view

Thanks for all your votes. My personal view is that he could have left more room, but we lost a great final few laps because of the penalty. There was enough doubt to let them carry on. Remember Dijon! #f1 #Dijon

What a ridiculous call!! 5 second penalty, this is supposed to be racing, that’s part of it!! Talk about shooting yourselves in the foot!

So close. Closed it well by Vettel, to me that’s racing. No penalty. End of message. #CanadianGP pic.twitter.com/ahR81Bcy6u

The podium cermony showed how no one was happy to be up there, as a result of this stupid penalty. It ruined a great race for all us fans… Kudos to Vettel for not having it, and to Hamilton for being a great sportsman. #anticlimax #F1

.@f1 was Vettel meant to vanish into thin air once rejoining the track there? #CanadianGP pic.twitter.com/dFynmDECrA

Not sure what the stewards expected Vettel to do as he rejoined, make his car disappear? pic.twitter.com/7Kw7w6Q53r

Any of the stewards ever raced at the front in F1? Didn’t watch the race.. have now seen the “incident”.
Mental penalty. 🥴🧐

Not really sure what VET could have done differently when rejoining….with the momentum he had he was always going to end up where he did….tough decision for VET. https://t.co/PVAFnPFdFm

Sky Sports F1 pundits also disagreed with the decision – Martin Brundle, Jenson Button, and Karun Chandhok all said there was nothing Vettel could have done.

"For me, it's a racing incident. You can’t just stop the car and stay off the circuit."@JensonButton has his say on the Sebastian Vettel penalty which denied him a #CanadianGP victory

We’ll leave the final word to motorsport icon Mario Andretti, who perfectly summed up the situation – not only in disagreement with Vettel’s penalty, but in questioning the role driving penalties should play as a whole.

I think the function of the stewards is to penalize flagrantly unsafe moves not honest mistakes as result of hard racing. What happened at #CanadaGp is not acceptable at this level of our great sport. @F1

If there are any positives to take out of this (and I’m really struggling to find one), it’s that the outrage at the penalty from all quarters might spark the sport into taking a long, hard look about the way it does things.

I won’t be holding my breath, though, because perhaps the worst part of this whole sorry situation is that when that penalty message popped up, a part of me that wasn’t at all surprised. 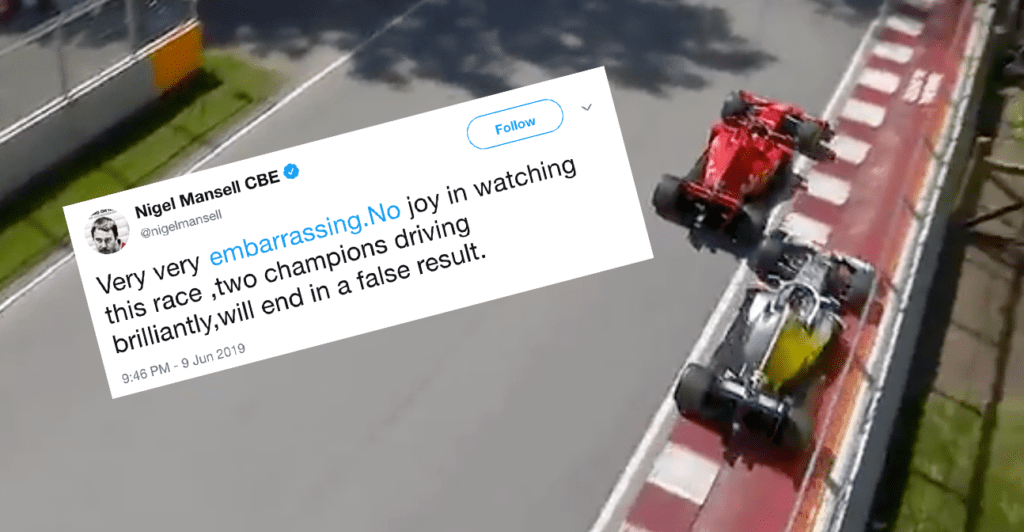