Racing Drivers Can’t Agree On Whether Verstappen Should Have Been Penalised – WTF1
Skip to content
×
Formula 1 , Opinion

Max Verstappen’s pass on Kimi Raikkonen was a definite highlight of the US GP, but when stewards realised he’d exceeded track limits to pull it off, he was swiftly given a penalty.

Was it the right thing to do? Should stewards have been more lenient in the name of entertainment? Several drivers (current and former) took to social media to say which side of the fence they’re sitting on.

Not fair ! This was not a track limit abuse from @Max33Verstappen , this was just a mega move – nothing else ! #grrr

Brilliant drive from @Max33Verstappen – such a shame to be penalised for that. So many people off track all the time. Makes no sense!

After watching videos could equally argue Kimi forced him there. Best overtake of #USGP. Feel sorry for @Max33Verstappen you got robbed @F1

Verstappen passing RAI was awesome! He cut the corner because RAI was turning into him and it looked like RAI would cause a crash #nopenalty

There’s an outside shot… he’s off.

Stunning shot, from the edge of the 18 yard box hits the bar.

Not correct Alex, the problem is that all the drivers drive outside track limits which is not a skill. That's called track limit abuse.

You know I hate it when track limits aren't enforced but they have always penalised going off to overtake. Mega move but not on track. Shame

So, who’s right? It’s a really difficult situation. By the letter of the law, the rules say that drivers can’t gain a lasting advantage by leaving the track. Verstappen definitely did that, but there are so many other occasions across the weekend where drivers left the circuit and weren’t penalised.

Lewis Hamilton was off the track on his pole lap. Sebastian Vettel was off when he took the lead at turn one. Carlos Sainz ran wide on the exit of Turn 18 after getting past Sergio Perez. Valtteri Bottas used the run off several times when battling other drivers.

The FIA and the stewards seem to be stuck in this rut where they only see it as gaining an advantage where one driver is overtaking another, and doing so on the inside of the corner. To them, running wide on the exit of a corner or extending the track to maintain speed doesn’t constitute ‘gaining a lasting advantage’. But racing drivers are a clever bunch – if they didn’t gain time from going off the track, they wouldn’t be doing it.

Given that we’d spent all weekend seeing drivers go off the track, to see Verstappen suddenly get penalised for doing it is what created the shock. It’s why fans are angry and it’s why so many drivers are coming out in support of Max.

F1 has been making a huge effort this year to attract new fans and to penalise Verstappen for his awesome, last lap, crowd-pleasing pass in this scenario – regardless of how ‘technically correct’ the penalty is – goes against that.

Of course, in an ideal world, situations like this shouldn’t even be allowed to happen, but modern circuit design is making it very, very difficult. Just because it’s really hard to police it at a circuit like COTA, it doesn’t mean they should be able to pick and choose when and where they dish out penalties.

I f*****g hate track limits, either enforce everywhere, or don’t enforce anywhere. That’s why I like old school American tracks..

So, was it right to penalise Max? As an individual incident, it’s hard to argue against it. Allowing it to stick could have set a very bad precedent. But given the way things had gone across the weekend, and the negative reaction from drivers, team bosses and fans alike, could they not have allowed this one to stick, and then clarified things in the future? Because it’s pretty clear that F1 needs to have a good hard think about how it deals with track limits – and it’s been that way for a long, long time.

Now we hate to be overly biased here at WTF1, so we’ll finish by sharing a tweet on the subject from a level-headed, neutral source who has no vested interests whatsoever in what the outcome was.

This is bulshitt. Sorry. This sucks 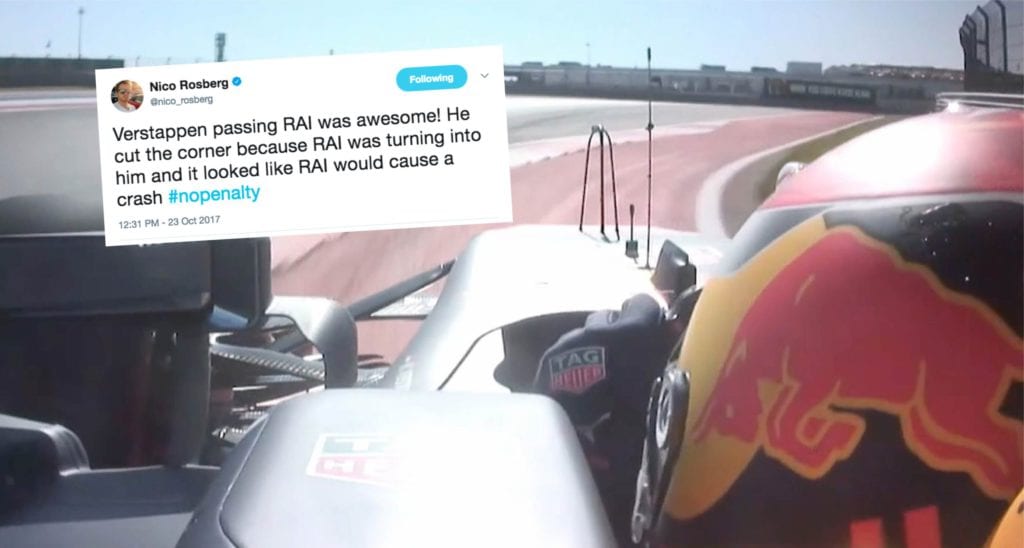