Raikkonen And Stroll Hit With Post-Race Penalties In Imola

Everyone got their breath back? Feeling relaxed? Nope. Us neither. We’re still thinking about that totally insane race. We’ve finally received the final classification and all penalties have been handed out post-race.

Here’s who has been penalised and how it changes the final results.

Stroll was handed a five-second time penalty for his pass on Pierre Gasly during the race. It was deemed by the Stewards that Stroll “left the track and gained a lasting advantage” when passing Gasly.

“The Stewards were informed after the race of an alleged breach. Having reviewed the video and heard from the drivers, the Stewards conclude that Car 18 [Stroll] was not able to complete his pass on Car 10 [Gasly] at Turn 2/3 without leaving the track completely shortcutting Turn 3 and returning on the track ahead of Car 10.

“He then failed to give the position back. In hearing from the drivers the Stewards accepted that car 18 was ahead of car 10 at the point he left the track, but that he was in that position because of a manoeuvre that he was not able to complete on the track given the wet conditions.”

Lance dropped a place in the final classification and now finished in P8, behind Gasly. He also has also gained another penalty point, taking his total up to four in the last 12 months.

Raikkonen has lost his two championship points after his impressive P9 finish during the Emilia Romagna Grand Prix. It has been decided that Kimi “failed to enter the pit lane for the restart”. Usually during the race, this kind of offence would be given a ten-second stop-and-go time penalty, however, as it was assessed after the race it was converted to a 30 second time penalty.

That hurts and it nullifies all the good work we’ve done this weekend. #ImolaGP

“The Stewards heard from the driver of Car 7 [Raikkonen], and the team representative and reviewed multiple angles of video evidence, telemetry and team radio.

“On the lap before the re-start following the race suspension, Raikkonen spun at Turn 3. Article 42.6 indicates that the driver may retake his position, so long as he does so prior to the first safety car line (SC1). At first the team instructed him to do so, but then told him to hold his position.

“Article 42.6 then indicates that should a driver fail to take his position he must enter the pit lane and can only re-join the race once the whole field has passed the pit exit.

‘Article 42.12 indicates that during a rolling start, once the safety car turns its lights out, “No driver may overtake another car on the track until he passes the Line…” In this case, the driver caught up to the cars ahead of him between Turn 13 and 14, but the safety car turned its lights out at approximately Turn 10. This would appear to be a contradictory instruction and the team instructed the driver to not regain his position, fearing that this would create a safety issue in the wet conditions. They radioed the Race Director, but there was no time for a response between their call and the restart.

“However, the rule requiring a car to enter the pit lane if it fails to regain its position is consistent amongst several championships, has been in the FIA Formula One

“Sporting Regulations for several years and has been consistently applied.

“The penalty is a mandatory penalty, and therefore the Stewards consider that they have no alternative than to apply this penalty for reasons of consistency.”

In short, Kimi has lost his points and promoted Fernando Alonso into 10th for his first championship points since his F1 return. The Alfa Romeo driver was handed a restart infringement and because it was decided post-race the penalty was converted from a ten-second stop-and-go time penalty into a 30 second time penalty as per the rule book.

Yuki was also handed a penalty after the race. The five-second time penalty was awarded for leaving the track on multiple occasions without justifiable reasons.

Honestly, not a great deal. Tsunoda already finished out of the points, but did get promoted up a place to P12 after Kimi’s 30 second time penalty. Tsunoda also got his first penalty point as a result of the offence. 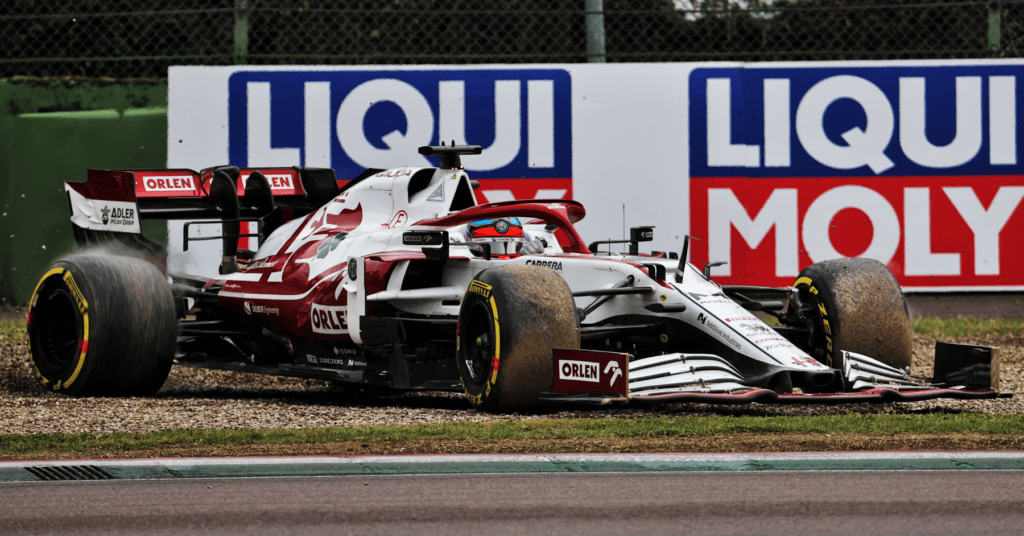