Raikkonen Thinks He Would Have Had Pole If It Wasn’t For Traffic – WTF1
Skip to content
×
Formula 1 , News

In what was surely one of the best qualifying sessions of the season, Raikkonen outperformed his title-contending teammate to secure third place on the grid for the Hungarian Grand Prix.

The Iceman headed the timesheets for a while in Q3 and was the driver that Lewis Hamilton and Valtteri Bottas ultimately had to beat to secure their unlikely one-two. The weather certainly aided Mercedes, which had been struggling with a loose, confidence-draining rear end in the dry practice sessions, whilst Ferrari even looked stronger than Red Bull.

But Raikkonen seemed as happy with how the Ferrari SF71H performed in the tricky wet conditions too and thought that he should have been on pole.

“We had the speed today to be on pole and I was pleasantly surprised how nice the car was on wets. It definitely hasn’t been our strongest point, so that was great. What is the most important, and nice, thing is the car was driveable and enjoyable in the wet.”

The real shame for Raikkonen is that he feels there was more time in the locker, but other cars on track denied him the opportunity for pole. It’s important to point out that Raikkonen isn’t accusing anyone of blocking him but is commenting more on how following a car in these conditions makes it tougher to drive as quickly as possible. He said:

“I was a bit unlucky, I changed to new tyres and [there was] not a lot of grip, but we got behind the Haas and with the spray it was impossible to see and improve. There was definitely the chance in these conditions today to be comfortably on pole but it didn’t happen.”

More to the point, Raikkonen only wishes he’d gone faster because by the time he was out of the car, his son had already eaten most of what might’ve been Kimi’s celebratory ice cream.

Raikkonen had a great session and whatever the weather, he’s likely to be a strong contender for the win – assuming team orders don’t come into play again, anyway… 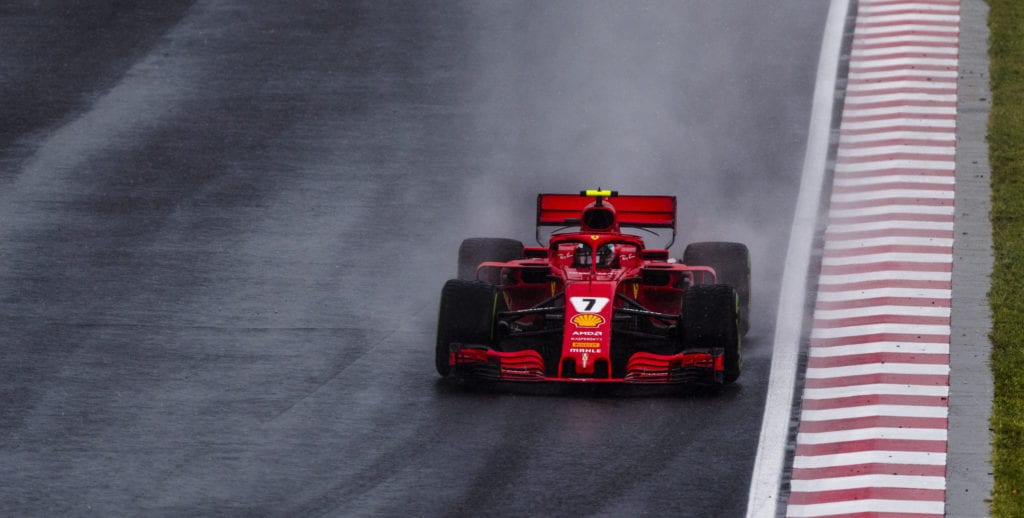