Raikkonen Was Distracted By His Steering Wheel When He Crashed Into His Teammate – WTF1
Skip to content
×
Crash , Formula 1 , News
1 comment

Kimi Raikkonen was the only retirement for the 2021 Portuguese Grand Prix, crashing out on just the race’s second lap. He made contact with his teammate, Antonio Giovinazzi, which snapped his front wing off and lodged it under his Alfa Romeo. Not an ideal start to the race.

Forced to retire due to the front wing being stuck under the car and sending him into the gravel at Turn 1, the ‘Iceman’ confessed that the accident was all his fault.

“I had to change some switch and got it wrong on the first try. Then I was checking it was right, and I just ended up driving into him. Luckily I didn’t destroy his tyres. Far from ideal,” Kimi told F1.

Kimi started in 15th for Sunday’s race, with many hoping he could replicate the outstanding first-lap overtaking masterclass he managed at last year’s race. In the first lap of the 2020 race, Raikkonen passed an incredible 10 cars from 16th on the grid.

Giovinazzi, the one whom Kimi had the contact with, explained that it was, fortunately, a “really small touch” after the race.

“It is what it is. It was really a small touch to be honest. I need to speak with Kimi, but it was a bit lucky from my side.”

Of course, we’re sure there will be plenty of jokes made about Kimi and his steering wheel after his iconic piece of team radio from the 2017 Azerbaijan Grand Prix. If you know, you know.

It was also confirmed that Alfa Romeo and Raikkonen would not be able to get back their points scored in Imola after Kimi was handed several penalties post-race that pushed him outside of the championship points.

“Alfa Romeo Racing ORLEN acknowledges the decision of the FIA and the Emilia Romagna Grand Prix stewards to uphold the original penalty to driver Kimi Raikkonen, following a review of the incident,” the statement read. “The team’s focus is now fully on next weekend’s Spanish Grand Prix.

Here’s on to bigger and better things at the next race for Kimi! 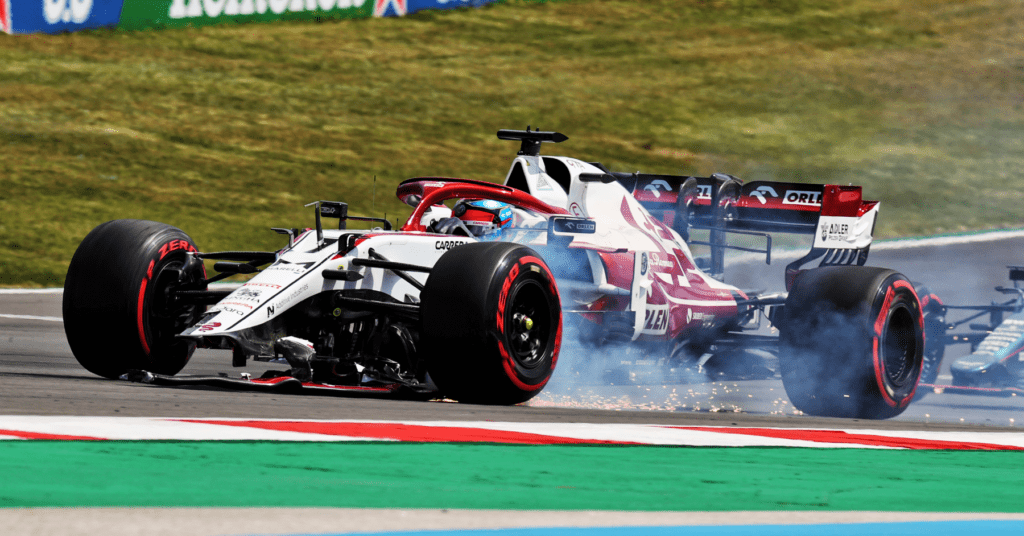