Launch season is well and truly upon us, and with new cars we get new liveries. F1 teams are so secretive these days and often don’t even reveal their actual cars, so liveries a lot of the time are the main focus. As a livery obsessive myself, I thought it would be good to critique and rate each 2021 F1 livery as they arrive.

As mentioned in my last piece, liveries are subjective so feel free to disagree and let me know your ratings in the comments.

McLaren launched their 2021 McLaren MCL35M with a big launch event online but the design is almost identical to the 2020 car. Now there’s nothing wrong with keeping the same livery year on year when it’s good, but for me the McLaren livery was far, far better in 2019.

My main beef with the current McLaren livery is the blue horizontal sections make the car look even longer and current F1 cars look far too long as it is. The matte finish also doesn’t help, as it’s such a beautiful colour scheme and the matte just mutes it a little too much. Overall, it’s a great colour scheme but the design could be so much better as we saw in 2019.

I was probably in the minority here, but I wasn’t the biggest fan of last year’s AlphaTauri. It looked nice from the side but the front angle was rather boring. For the AT02 they extended the blue onto the nose which looks beautiful, kept the white along the bottom and the red Honda logo which was the best thing about the previous design. It keeps the identity of the team with the navy blue and white, but mixes up the livery a bit which is always a nice thing.

The pin stripe, the white rims, the Honda logo on the back… it may not be as good as the last Toro Rosso livery, but overall it’s an absolute beauty.

The Alfa Romeo C41 received plenty of praise online when it was released, and rightly so. The switch of the red and white makes you wonder why it wasn’t that way in the first place, and the pop of green for the clover on the logo is pure class. My only criticism is (like last year’s AlphaTauri) there’s too much white on the nose and it can make the car look a bit plain from some angles. Extending the red down the nose or even on the side would make it look so much better, as proved here by Sam on Twitter.

I made the Alfa Romeo better pic.twitter.com/YKQ5tuSngj

It’s a brilliant livery and if they’d extended the red I’d even go as far as giving it a perfect 10/10 but because it can look a bit plain from some angles, it loses a few marks.

Now, if you saw my recent column, you’ll know what I think to the current Red Bull livery.

It’s a modern classic and will one day be as adored as the Vodafone McLaren is now. Sure, I’d have loved to have seen another crazy testing livery just to give us something to get excited about but the RB16B colour scheme (which has hardly changed since 2016) is pretty much perfect.

It’s simple but effective, the Red Bull logos pop and the addition of the Honda logo on the rear wing makes it the best version so far. People have tried many redesigns, even swapping the Red Bull bull logo and the Red Bull text logo around but there’s a reason why it’s stayed the same. If it ain’t broke, don’t fix it.

Time for one of the biggest livery downgrades in F1 history.

Having had a go at redesigning a Mercedes livery myself, I know how tricky it is to get INEOS red and PETRONAS turquoise working, and while it looked a bit of a mess on last year’s launch livery, when they switched it to black it looked stunning.

Let’s just get straight to those AMG logos. They look so bad that I, and many others on Twitter, genuinely thought Mercedes were trolling as they did with a testing livery a few years ago. The AMG logo doesn’t work as a pattern like the Mercedes star did, as it’s a logo rather than a shape, and when the silver looks darker from some angles, it makes the logos stand out and look even worse.

The idea behind trying to bring a bit of silver back to the livery is a nice one, it’s done well under the Petronas logo but I just can’t get over that pattern on the back, which maybe does have at least some potential if you take a look at what MDM Designs has done here.

I think it has potential and it is an evolution – which is what people like.

Although I would have expected the AMGs to be more in the way of the star pattern. It would have been a bit cleaner IMO pic.twitter.com/SASECGIhXa

The big bosses at Mercedes will no doubt be happy as everyone is talking about AMG, but it’s come as a sacrifice to what was a beautiful livery. It looks decent from some angles but the AMG part at the rear is so bad and so prominent it brings the whole grade crashing down.

Wow. Now, I’ll be honest, the Renault was one of my favourite liveries in F1 and when it was announced that the team would be rebranding as Alpine I was a little disappointed; especially as some many other F1 cars are blue currently. This however is absolutely spot on.

When the team released the black ‘winter livery’ I already had high hopes. The French pattern on the back works so nicely with the modern F1 car shape and much like the 2019 McLaren livery, it cuts into the car well and makes it look less long and boat like. Now we’ve seen the full reveal, it’s not just the black that’s been replaced with the stunning metallic light blue. There’s also some nice pops of red on the front wing, and the side of the nose which ties the whole thing together.

I think it’s fair to say Aston Martin was one of most hyped launches and liveries in recent times and it’s certainly lived up to expectation for some. There’s no doubting the colour is stunning, the metallic finish is a nod to the classic Aston Martin racers of the past and there’s even a vintage style British flag badge on the nose which is a lovely touch.

The pink, as explained in my theory here, was a last minute addition to the livery and while some would have preferred the AMR green instead, I think the pink is nice addition to the design and makes it more unique. However, it’s all a bit too safe for my liking, more a colour scheme (a great one at least) than an actual livery.

I also really wish they’d implement the Aston Martin wings badge better, perhaps half the wings logo big on the engine cover like many of the concept designs. Perhaps, with the new cars in 2022 and a full year to incorporate the pink, we might get something a little more fun. Overall it’s ok but it could be so much better.

Ah yes, the Russian Haas. Just imagine trying to explain to someone who doesn’t watch F1 that this is the livery for F1’s only American team.

Now, to fairly judge this livery I’m going to put the political stuff to one side and judge it purely on the design. It’s certainly not a safe design, I’ll give them that, and while I think Alpine’s more subtle approach to a nation flag design is better, I do like this design which looks particularly good from the side profile.

For me, this livery is very well designed, it’s just the colour scheme and the in-your-face national flag design that brings the grade down so much.

Ermm… this really is quite something. It genuinely took me a good few minutes just to take it all in and gather my thoughts. I love the fact Williams have decided to do something a bit different here, but I can’t get over the fact that it looks like they let one person design the front and a completely different designer do the back.

From the front up until the cockpit, I actually think the livery looks brilliant. The colour blocks are interesting modern shapes and I love the light blue and orangey-yellow with the navy blue. Then all hell breaks loose; another shade of blue is introduced.

There’s a pattern which in no way matches the car shape, or the great design on the front, and the nice yellow accents are pretty much none existent. Overall the design could have been great but it ends up looking like a ‘My Team’ custom livery from the F1 game… and not a good one at that.

It’s red… and burgundy… and green?

People are quick to take the piss out of Ferrari liveries saying ‘oh shock it’s red’, but this year’s design showed exactly why it’s best to keep it simple. I loved the special burgundy design at Mugello and it was great as a one-off to celebrate the team’s 1000th Grand Prix. For some reason (like Mercedes) they’ve tried to combine two very different ideas into one livery and for me it just doesn’t work at all.

And yes it’s probably a marketing gimmick as the logos probably won’t appear on the car during most races, but making just one of the many Mission Winnow logos a horrible snot green colour. What is that about?

It’s very difficult to make a Ferrari F1 car not look absolutely beautiful but they’re really trying with this one. 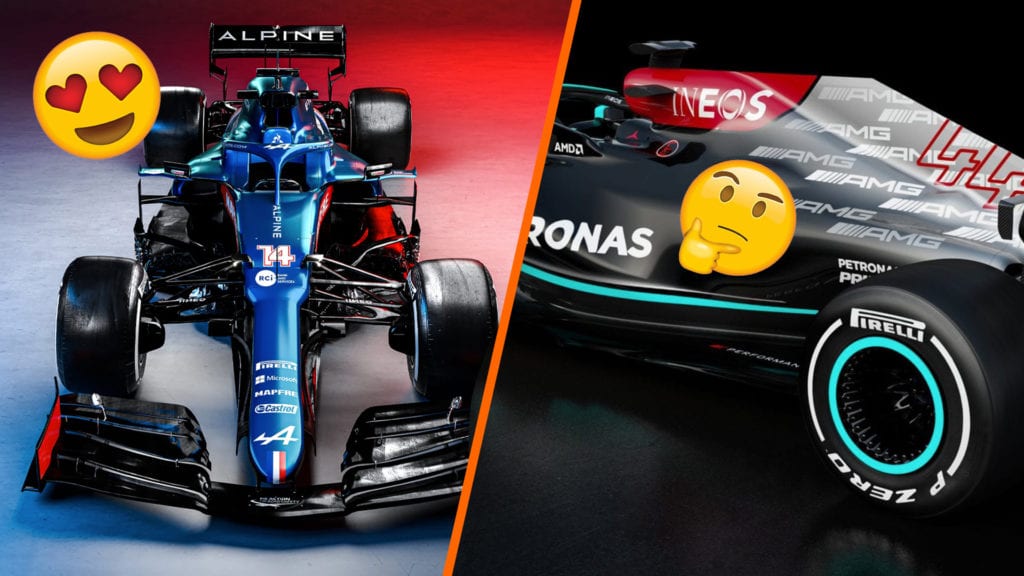