Red Bull Says Gasly Will Not Be Replaced Mid-Season

Gasly’s Hockenheim woes featured a hefty crash in FP2 and a scruffy race showing that ended with a race-ending collision with Toro Rosso Alex Albon; while teammate Max Verstappen took his second win in three races. To compound Gasly’s misery, Albon took a career-best sixth place with a gutsy drive – even taking on Lewis Hamilton at a safety car restart – and Daniil Kvyat claimed Toro Rosso’s first podium since Sebastian Vettel’s victory at the 2008 Italian Grand Prix with third place.

Kvyat and Albon’s performances in the first half of the ‘19 – and Marko’s dislike of mediocrity – have fuelled rumours that one one of the Toro Rosso pair will inherit Gasly’s seat mid-season. Marko insisted to Autosport that this would not be the case, but did cede that Kvyat’s improved maturity, speed and consistency has piled the pressure on the 23-year-old.

“This year we won’t change. We will end the season as we currently are.”

In an interview with Red Bull technical partner ExxonMobil earlier this month, Gasly said that his relationship with Marko and team boss Christian Horner has improved through the season – and his Silverstone performance seemed to substantiate that belief. Horner praised the 2016 GP2 Series champion for beating Verstappen in all three practice sessions and looking competitive in the race – ultimately finishing as the best-placed Red Bull in fourth due to Vettel’s surprise attack on Verstappen.

The British weekend could have been a welcome turning point after a humbling Austrian Grand Prix, a race where Verstappen lapped the eighth-placed Gasly on his way to victory. It may appear to be just an anomaly.

Gasly, though, believes he is growing into his seat at Red Bull, after early setup struggles with the RB15. He described Hockenheim as being “out of context” and noted his qualifying pace, but a 107-point deficit to Verstappen in the championship does not make for easy reading.

“I’m just focusing on my job, performing and getting the max out of the car. And then for sure there are things to improve, with the team together. I think we are clearly making the step. I’m really happy with the way we are working with the team and the improvement we are doing. Just need to keep pushing in that and together we’re going to get the result we deserve.

“I think [I have been making satisfactory progress]. In qualifying, I got my lap time deleted but I was a few hundredths from second place, at Silverstone I was fighting a bit more to the front. [The German GP] was out of context but I feel that we are clearly making some big steps. So I’m confident it’s going to pay off more consistently soon.”

New father Kvyat does seem like the obvious replacement if Red Bull wants to avoid rushing Albon into a top seat – just as it had to do with Gasly at the end of 2018. But will Dr Marko be willing to soften even further after a big change in heart brought Kvyat back into the picture in the first place after a rather unceremonious dumping two years ago? 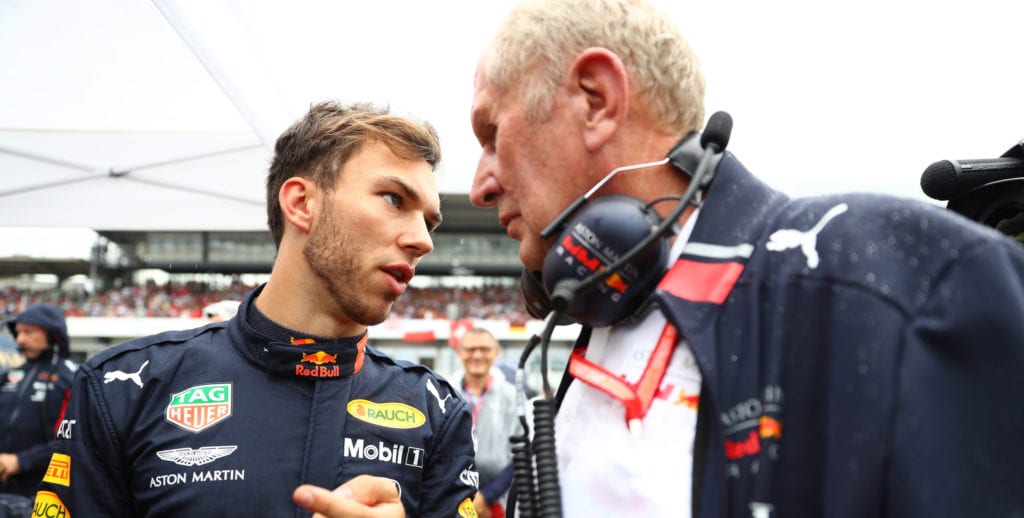