Giancarlo Fisichella was always pretty good at doing something spectacular in uncompetitive cars – think of his many podiums for a waning Benetton from 1998-2001, or his improbable (if fortunate) maiden victory for Jordan in 2003. But he saved perhaps his most remarkably surprising performance for his last season in F1.

Driving for Force India, the team had yet to score a single point after 29 races. At Spa, however, the car just worked, and boy did Fisi capitalise.

He topped the times in Q1 and teammate Adrian Sutil proved the car’s pace by ending up fourth fastest. In Q2, Sutil just missed out and ended up 11th, but Fisichella went fourth and got through to Q3. It was there that he put in this blinding lap to take a surprising, but totally deserving pole position.

It was a slightly strange qualifying session all-round. Toyota was having one of its good weekends and Jarno Trulli was on the front row, whilst BMW-Sauber also showed the kind of speed it had been lacking all season to line up third and fifth.

In the race Fisi showed it wasn’t just one-lap pace that the VJM02 had, and were it not for Kimi Raikkonen’s KERS-equipped Ferrari blasting ahead after an early safety car, he might have won the race. As it was he spent most of the race tucked less than a second behind the Ferrari, but unable to overtake.

Pole position and second place was still an incredible result for a team that had never scored before, though. It turned out the car had an extremely good low-drag design which worked well on fast tracks, something Adrian Sutil proved two weeks later at Monza by qualifying second, finishing fourth and taking the fastest lap.

For Fisichella, it was his last great giant-killing performance. Following his Spa heroics, he switched to Ferrari for the rest of the season, replacing Luca Badoer as the substitute for Felipe Massa and having a pretty horrible time of things. He couldn’t find a seat for 2010 and left F1 for sportscar racing, where he’s had (and is still having) plenty of success in GT racing for Ferrari. 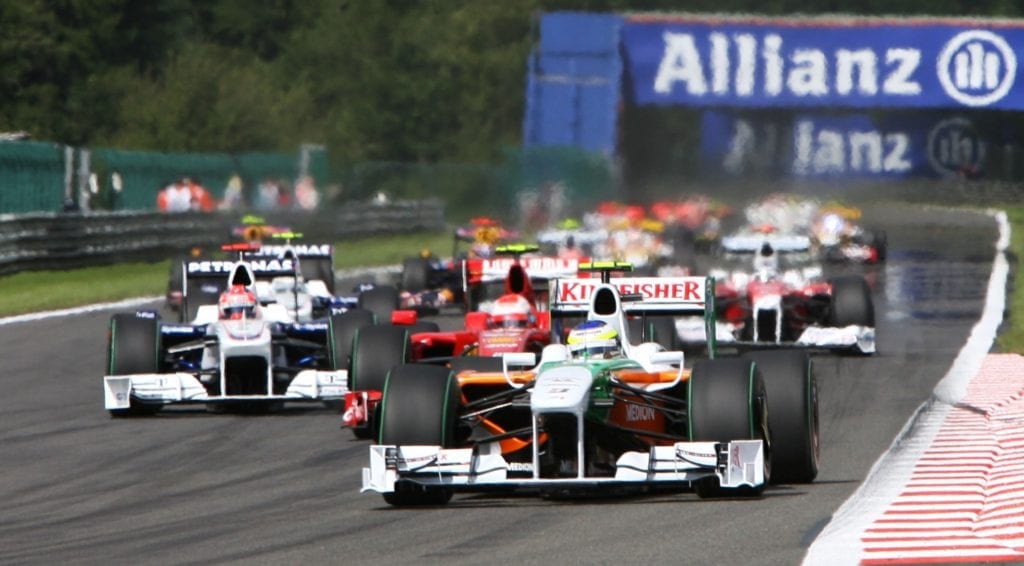