The 6 August marks a pretty special moment for former British F1 driver: Jenson Button. Because, of course, it’s the anniversary of his maiden win.

It proved to be a pretty mental and chaotic race, which started in wet conditions and gradually dried out as it progressed. Perfect conditions for Button, really.

The eventual 2009 F1 champion had come close to wins in his breakthrough season with BAR Honda in 2004, before a tough 2005 that featured a disqualification and two missed races.

The following year hadn’t got off to the best of starts. The Honda was sporadically quick, but definitely didn’t look like a contender for victory.

But, the Hungarian GP wasn’t a ‘normal’ F1 race. There was curveball after curveball, as quick drivers moved up the order from the back of the grid, only to retire later on.

Button started down in 14th after an engine change penalty. Michael Schumacher and Fernando Alonso were 11th and 15th, due to two-second qualifying time penalties.

Yes, that was a ‘thing’, because Alonso overtook under yellow flags in FP2 and Schumacher passed drivers under red flags in FP3. Naughty, naughty…

This gave a driver other than Alonso and Schumacher the chance to win, but few expected it to be Button, with the Brit starting well down the order too.

Kimi Raikkonen led away at the start, in wet conditions (the first wet Hungarian GP in the race’s history). Schumacher and Alonso were on fire on that first lap, staggeringly rounding the last corner on the first lap in P4 and P6.

Button was taking things a bit carefully but he was still making steady progress, before he found his feet and rapidly moved up the order – rising to sixth place, shortly after Alonso displaced Schumacher for third.

Bridgestone’s wet tyres weren’t working particularly well and Schumacher’s fight up the field started to stall. The McLaren drivers up ahead pitted, giving Alonso the lead, while Button stopped soon after.

Schumacher had to pit a little while later, but it dropped him to ninth, after damaging his front wing in a battle with Giancarlo Fisichella. This gave Alonso a monstrous 39-second advantage by lap 25, which is absolutely crazy – when you think about it.

Then, Raikkonen shunted into Vitantonio Liuzzi as he tried to lap the Toro Rosso, in a bizarre accident, and the safety car was deployed. Alonso pitted and Button was now up to second, but there were lapped cars between them.

Once they were disposed of, Alonso and Button started duelling for position, with the knowledge that both would need to stop again. Those stops happened on laps 46 (Button) and 51 (Alonso), with Alonso going to dry tyres.

But, as the Spaniard got to the first corner, he slowed with a loose wheelnut. It fell off at the next turn and that was it. Another curveball and the race was now Button’s to lose.

He managed to pit for dry tyres, come back out still in the lead and cruise to a stunning first victory in F1, ahead of Pedro de la Rosa and Nick Heidfeld.

Contact with Heidfeld damaged Schumacher’s suspension and he fell to ninth, but was promoted to a point in P8 when F1 rookie Robert Kubica (a topical mention, with his recent F1 return) was disqualified with an underweight car.

Quite a Hungarian GP and one we’ll be remembering for some time. 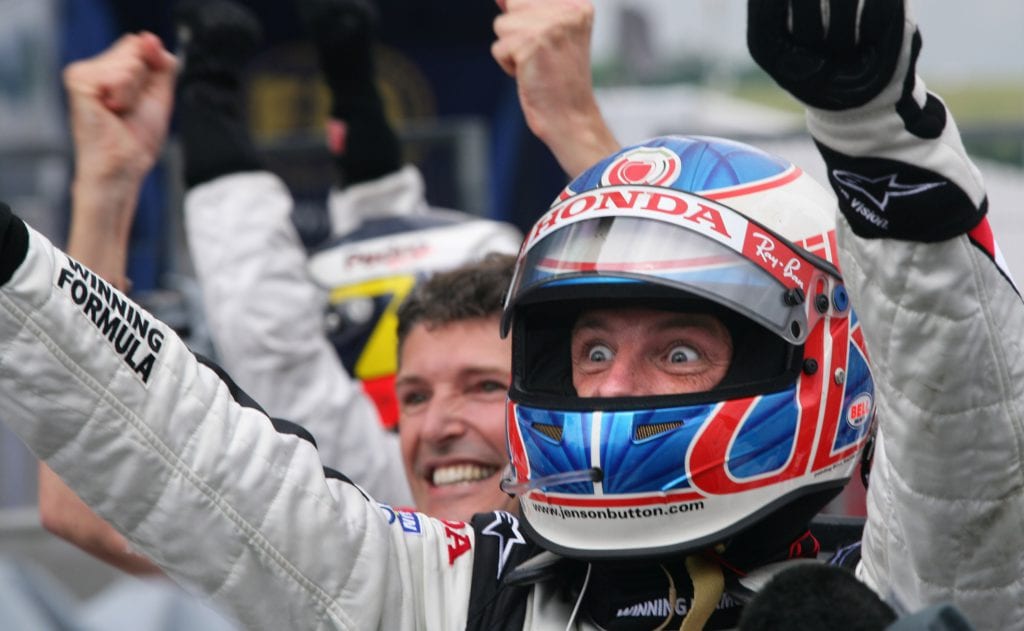