Following qualifying at the Shanghai International Circuit and the opening part of the race, which started in slippery and damp conditions, it looked unlikely Schumacher would win.

The Renaults of Fernando Alonso and Giancarlo Fisichella locked out the front row and led the way, with the Michelin cars seemingly having an advantage in the wet conditions on intermediate tyres.

Schumacher only qualified sixth, behind the Renaults, Hondas and Kimi Raikkonen’s McLaren, and held onto that place early on, while Alonso and Fisichella scampered off into the distance. He didn’t look to be much of a factor.

But as the track dried out, it started to swing more in favour of the Bridgestone cars, enabling Schumacher to make up ground and follow Raikkonen up the order (before the McLaren retired, of course).

Then came the pitstops, which brought Schumacher into contention. Alonso changed his front tyres for worn intermediates while his two rivals kept their used inters. Fisichella and Schumacher got it right and Alonso struggled for grip, losing the lead and a lot of time.

The switch to dry tyres came a little while later. A wheel nut problem held up Alonso even more, while Fisichella made a mistake at Turn 1 as he returned to the track and ran wide, allowing Schumacher through. Oops.

From there, Schumacher raced off into the distance and was unchallenged, winning his 91st and last F1 race. Alonso put on a stunning charge though to recover to second and finished just three seconds behind.

He did lose the championship lead to Schumacher, but we all know how that ended up. Fisichella was, unsurprisingly, a distant third. But the battle for fourth heated up very nicely on the last lap.

Jenson Button was the man on the move and passed Nick Heidfeld at the hairpin on the final lap, as the BMW Sauber got blocked by a Super Aguri. Heidfeld hitting the brakes hard caught Rubens Barrichello out behind.

His Honda smashed into the back of the BMW Sauber. Button came home fourth, while Pedro de la Rosa picked up the pieces in fifth. Barrichello crossed the line minus a front wing sixth and Heidfeld limped around to the finish seventh, without a right-rear wheel.

It was definitely a race that packed in a whole lot of elements – changeable conditions, strategy, on-track action and drama. With it being Schumacher’s last win, too, it’s definitely a race many F1 fans will remember for some time. #KeepFightingMichael 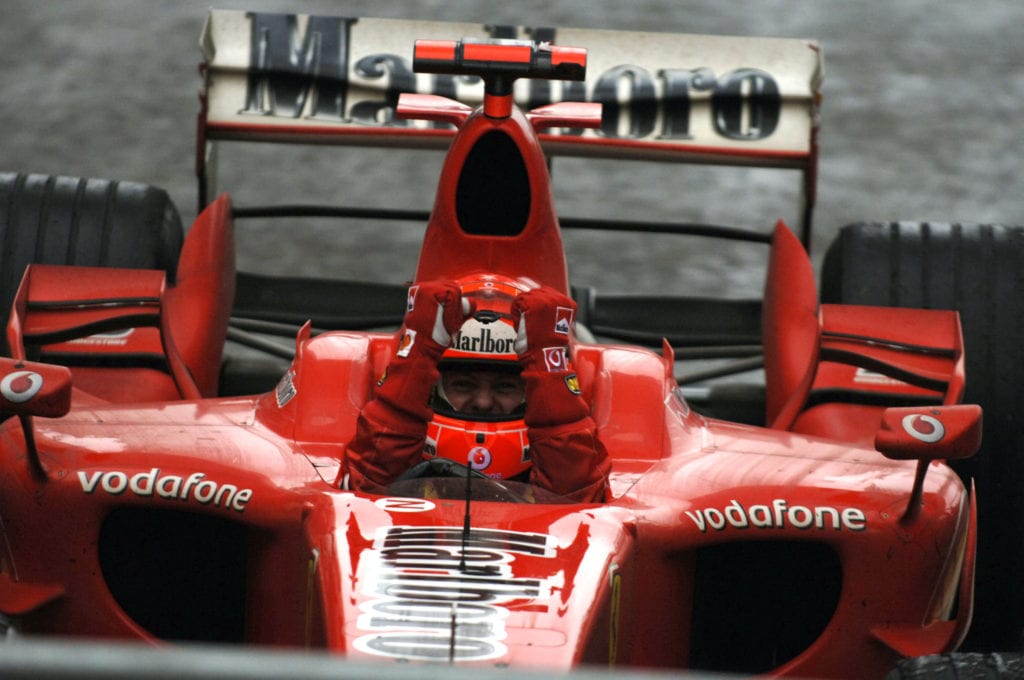