Renault Has Been Disqualified From The Japanese Grand Prix – WTF1
Skip to content
×
Formula 1 , News

Renault Has Been Disqualified From The Japanese Grand Prix

Hours after the climax of the race at Suzuka, news broke of a protest against Renault for breaching the FIA’s International Code and Formula 1’s technical regulations. The initiating team, Racing Point, accused Renault of using an automated and pre-set brake bias map that changed according to varying conditions without any input from Daniel Ricciardo and Nico Hulkenberg. This is an example of a driver aid, something that is explicitly forbidden in Article 27.1 of the Sporting Regulations. The team had its steering wheels and ECUs impounded for the investigation.

Renault left Japan with nine points through Ricciardo’s sixth place and Hulkenberg’s tenth – both positions altered from the provisional classification due to penalties and an early chequered flag. With the team trying to hunt down McLaren for fourth place in the Constructors’ Championship, the exclusion is certainly far from ideal. But, in a silver lining, it appears that Renault has escaped exclusion from the season as a whole. Tyrrell lost all of its points in 1984 after being found guilty of transgressing a number of rules – including the minimum weight by using lead shot in the 012’s water tank.

The stewards’ report detailed the findings of four questions; did Renault use a powered device to change the brake bias, was it pre-set, were there any changes made regarding the bias by the drivers in-car and did all this count as a prohibited driver aid?

“However, although legal under the Technical Regulations, the Stewards find the Renault system constitutes a driver aid and is, therefore, not in compliance with Article 27.1 of the Formula 1 Sporting Regulations, which requires the driver to driver the car alone and unaided. The brake balance adjustment system in question acts as a driver aid, by saving the driver from having to make a number of adjustments during a lap. The Stewards note that there is a clear distinction between this and one that provides actual feedback control, which would be a substitute for driver skills or reflexes. Nevertheless, it is still and aid and, therefore, contravenes Article 27.1.

The stewards also noted that this punishment may seem harsh given other transgressions of Article 27.1, but they felt that the previous examples – such as Alfa Romeo’s 30-second time penalties for a faux launch control in Germany – did not provide as much of a benefit.

While Renault did not deny that the brake balance could show change on the steering wheel display screen without prior driver input, it retorted that Racing Point did not have “any conclusive video evidence” and this was all down to speculation.

The revised classification sees Charles Leclerc’s sixth place reinstated despite his 15s worth of penalties, and Lance Stroll and Daniil Kvyat sneak into the points. 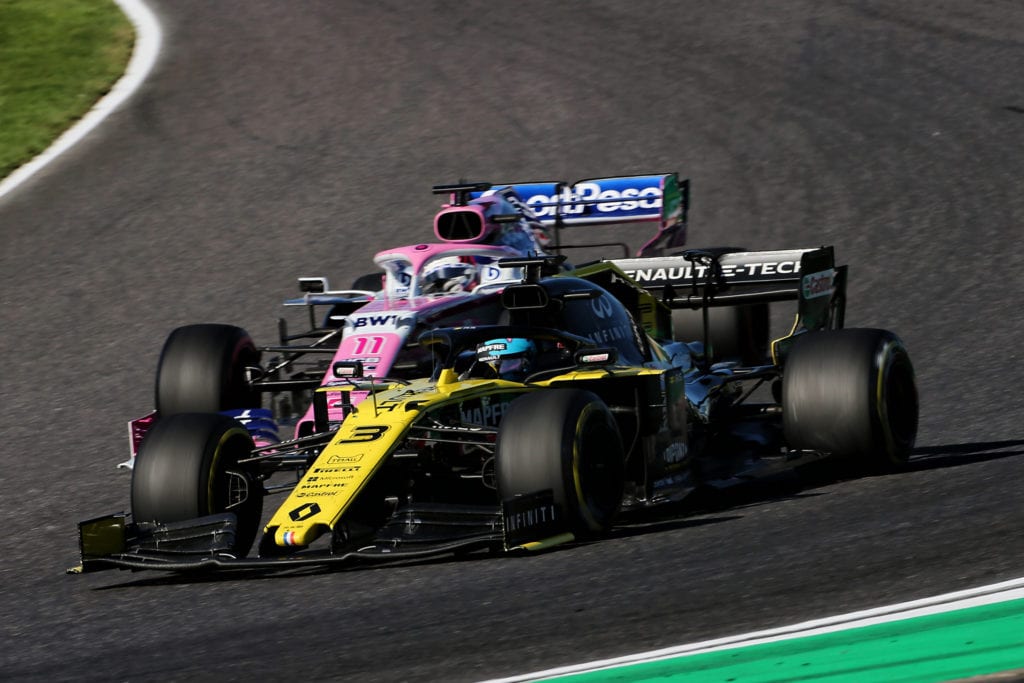