The Renault RS2027 Vision takes us 10 years into the future of F1, with a radical design focusing more on the drivers, electric technology, performance and improved safety.

It follows on from similarly dramatic and futuristic-looking concept designs from Ferrari and McLaren in the past – it’s interesting to see just how these differ.

The car has been designed to celebrate 40 years of Renault in F1 and was unveiled at the Auto Shanghai show.

It really is a stunning piece of futuristic racing machinery, with a more human-focused design featuring a transparent cockpit and transparent helmet so you can actually see the driver.

There’s also improved fan involvement and accessibility, with LED lighting on the wheels showing lap and position information and a system similar to Formula E’s FanBoost where fan interaction on social media determines which driver gets a boost of power.

Safety differences include a cockpit canopy and autonomous mode that can be activated in the case of an accident, or kick in under safety car of virtual safety car conditions.

Looking at the engine and driving stats, the car has four-wheel drive, four-wheel steering, high-energy density batteries and a full-electric mode for pitlane use.

An incredible 1 megawatt of power (1341bhp) is produced and a weight of just 600kg, with Kinetic Energy Recovery System power set to 500kW (a huge improvement compared to the 120kW for 2017).

There’s two ERS-K units, one at the front and one at the rear, and a V6 Turbo power unit. So, the RS2027 Vision is definitely going for ridiculously quick top speeds and performance.

Renault also added some suggestions to the sporting regulations, including a cost cap and restricted development work – limiting a team to three aero configuration changes per season.

Shaking up the race format was also suggested, with slightly shorter Sunday race (250km compared to 300 at the moment) divided into two parts – a long first section, and then a shorter ‘Final Sprint’.

There’d also be a ‘Rookie Night Race’ with teams’ reserve drivers and those racing in their first F1 season, to take place on the Friday evening of a race week.

It all sounds very wacky, different and intriguing. Do you like Renault’s vision of F1’s future? Let us know in the comments! 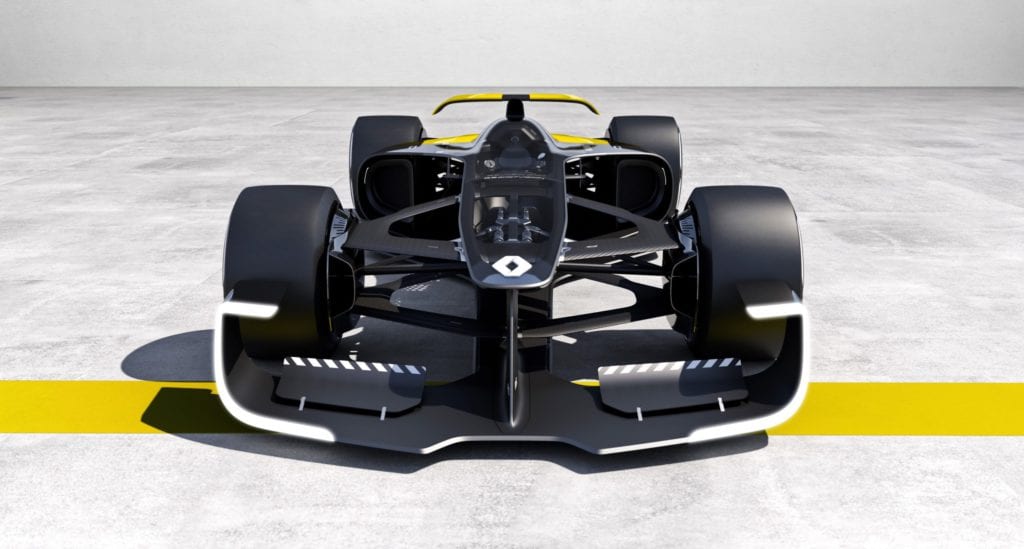