Renault’s Showcar Ended Up In The Barriers During The F1 Fan Festival In Sao Paulo – WTF1
Skip to content
×
Crash , Formula 1

Renault has a fairly large number of drivers in its academy, one of whom is 17-year-old Brazilian, Caio Collet. He finished as top rookie and fifth overall in this year’s Formula Renault Eurocup and was then tasked with driving the 2012 Lotus E22 (which must be one of the hardest-working showcars in F1 – it’s used everywhere!) during the F1 Fan Festival in his hometown of Sao Paulo.

Donuts and spin turns are basically mandatory during demo runs – both for their crowd-pleasing purpose and as the easiest way to turn around on the narrow course – but that can lead to the occasional incident, with many drivers being left looking a little foolish over the years. Unfortunately for Collet, he’s now joined that list as one of his manoeuvres didn’t quite go to plan. Halfway through a turn, his rear tyres seemed to grip up and sent him trundling into the barriers.

No harm done – a new front wing and the car and driver were right as rain.

There was plenty of other things for those in attendance to enjoy anyway. Esteban Gutierrez gave the 2017 Mercedes W08 a bit of a spin, but the main thing about the festival was the central theme of paying tribute to the great Ayrton Senna. Brazilian legends Felipe Massa and Emerson Fittipaldi got behind the wheel of Senna’s 1986 Lotus 98T, with his 1984 Toleman TG184 also getting a run.

A pretty special moment for everyone, then – well, apart from Collet’s minor incident. But hey, he’s not the first driver to drop it during a show run – icons like Sebastian Vettel, Max Verstappen and Pastor Maldonado (of course) have also had crashes – and he certainly won’t be the last, either. 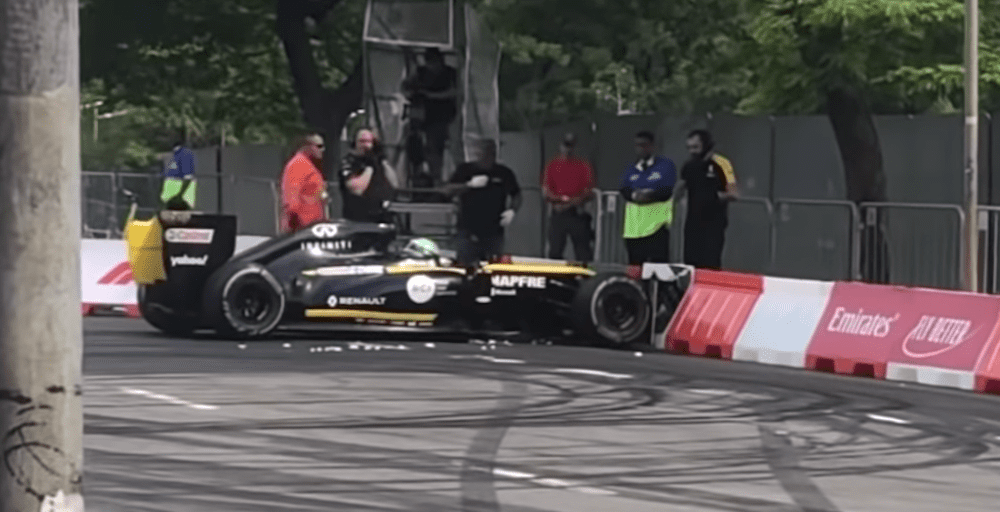