Ricciardo Banged Wheels With Vettel On Purpose For The Fans – WTF1
Skip to content
×
Formula 1 , News

Ricciardo Banged Wheels With Vettel On Purpose For The Fans

From our perspective watching the second race of F1 2017, it was full of drama and excitement. But the ‘Honey Badger’ said he got a bit bored and wanted to spice things up for the fans.

Mid-way through the race Vettel went for a dive around the outside of Ricciardo at Turn 6 but his Ferrari was squeezed to the edge of the track.

It was a wonderful move but Ricciardo wasn’t going to give the place up easily and the two cars ended up banging wheels and kicking up some smoke.

Vettel went on to finish second, while Ricciardo struggled early on but recovered to hunt down his team-mate Max Verstappen, eventually finishing just behind him in fourth.

In typical cheeky Ricciardo fashion, he’s spilled the beans and said he barged wheels with Vettel on purpose, to ramp up the excitement for fans.

Very kind of him.

Also he did it because he was bored.
Dany Ric knew the wheel-rub wouldn’t damage either of their cars and thought it was a bit of fun. He said after the race:

“I was honestly a bit bored, so I just thought let’s bang some wheels and get the crowd excited. I’d be lying if I said it wasn’t intentional, but I knew there was no harm done. A little bit of smoke for the fans.”

To be honest, who doesn’t love an overtake around the outside and some good old fashioned rubbing of tyres during a feisty on-track battle.

It was definitely the overtake of the race and Vettel enjoyed it too, saying he got his “elbows out” and it was “good fun”.

The Chinese GP proved overtaking isn’t dead in Formula 1 this year, but also showed the drivers have to work harder to make the passes.

It may still be tougher, but when the overtakes are successful, they’re spectacular. 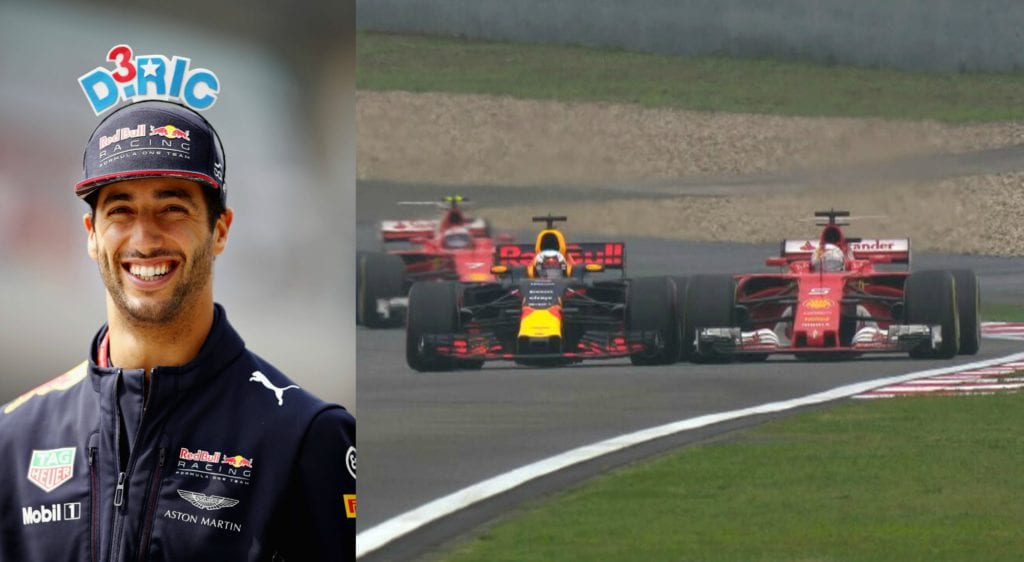