Ricciardo Crashed The New RB14 During The Filming Day

Shortly after we were all done being wowed by the stunning camo testing livery and interesting design of the new RB14, Daniel Ricciardo was tasked with driving some laps at Silverstone as part of the team’s ‘filming day’. Really it’s just an excuse for the team to test out and shakedown the car, and although teams are limited to 100km of running on filming days, Red Bull had to cut the day short because Ricciardo binned it.

At a typically wet and soggy Silverstone, Danny Ric had a low-speed shunt which was apparently enough to damage the nose, front wing, floor, and suspension.

This can be bad news in testing when teams typically have fewer spare parts available, but Red Bull says it’s not going to affect the team’s schedule for the first Barcelona test next week.

That’s good news then, but what about the car? Well, despite the conditions and his little accident, Ricciardo was encouraged by how it felt:

“It’s hard to tell from a couple of laps but the initial feeling in the car is good. I can already feel that the rear feels pretty settled, even in these poor conditions. Those are encouraging early signs.”

He also said that he had no problems at all with the Halo:

“So far I can see fine with the halo. I’d only done a couple of installs with it before so it was pretty new today but I really didn’t notice it was there, which is pretty good. Honestly, unless there’s stuff above, I don’t see any issues at all on a flat track.

“It’s been a long day, trying to get everything going and complete the filming – but a lot better to have that here than in Barcelona.” 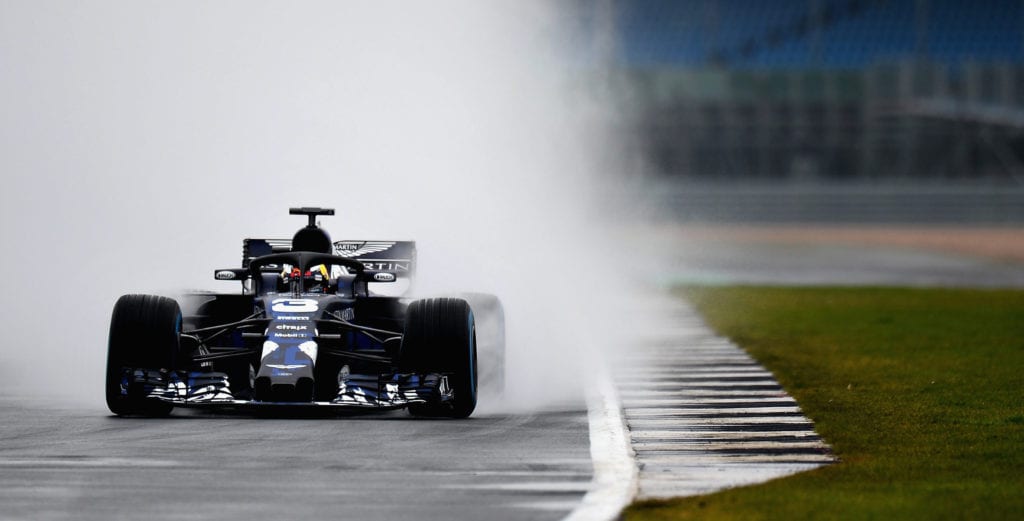