Ricciardo Has Been Penalised For Reversing Into Kvyat – WTF1
Skip to content
×
Formula 1 , News

Ricciardo Has Been Penalised For Reversing Into Kvyat

Ricciardo had pulled off some lovely moves during the race to be in the battle for the points, but his attempt to pass Daniil Kvyat into Turn 3 wasn’t one of them. In locking up and heading down the escape road he spoiled both his own race and Kvyat’s, but the drama wasn’t over there. In his haste to get back on track, Ricciardo whacked it into reverse and started backing up, only to go straight into the side of Kvyat. That caused damage to Kvyat’s floor, putting him out of the race, and both drivers had to go and see the stewards after the race.

Usually when investigating incidents, the stewards will look up past instances to provide some guidance and consistency with decisions, but good luck to them in finding something similar to that! But, given that the contact was ultimately race-ending, the stewards decided to give Ricciardo a three-place grid penalty for the Spanish GP.

He’s also been given two penalty points on his licence, the first he’s received since speeding under red flags in practice for the 2018 Australian GP, and just the second batch of penalty points he’s had since the system was introduced in 2014.

Speaking about the incident, Ricciardo said he acted too quickly and simply didn’t know that Kvyat was behind him, telling Sky F1:

“I obviously don’t feel good about what happened,. At the time it was looking quite good for us. We were starting to pick up the pace and obviously closing in on Daniil. I saw a gap and thought I would have a go. It is always tight into Turn 3, and initially I thought I had the commitment and would pull it off. Then I felt it was starting to lock and I missed the corner.

“At that point as soon as I went down the escape road, it was just I guess a sense of urgency and a bit of panic if you will – and try to minimise damage and lose as little time as possible. I found reverse and started going and to be honest I had no idea he was there. I guess the urgency stopped me from looking.”

He also apologised to Kvyat after the race. Even aside from the bizarre reversing incident, it was a shame for both drivers as points were on the table and would have been a solid result for either. 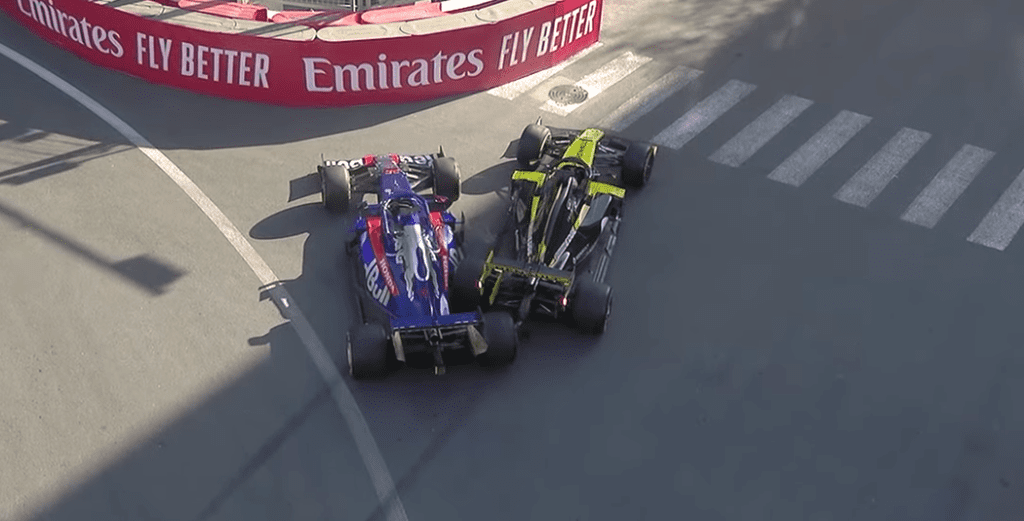