Ricciardo Is Getting Closer To Achieving An Unusual Record

Taking pole position is a huge step towards taking victory, especially in modern Formula 1. But there are some drivers who managed to take all of their career wins from places other than pole position.

Daniel Ricciardo has now taken six wins – all after starting outside of the top three. But where does he slot into the list of other drivers with similar records?

1967 World Champion Denny Hulme is one of two champions (the other being Niki Lauda) to have not taken a single pole position in their title-winning year. Hulme is also the record holder of the most career wins without having ever won from pole.

Yup, three more wins and Danny Ric could take Hulme’s record! Two of his six wins have come from fourth on the grid, one from fifth, two from sixth, and in Baku last year, he won from 10th.

He might not be on this list at all had Red Bull remembered to bring the tyres out for his stop at Monaco in 2016, his only career pole so far, and chances are he could drop off it in future if he ever does win from the front. But he’s by far the most current driver on this list, showing just how great he is at capitalising on any opportunity.

For all his speed (and the fact that for a while he held the record of the fastest F1 lap ever), the 1982 champion never managed to convert any of his five poles into a win. The closest he came was in the 1985 French GP when he started on pole but was beaten into second by Nelson Piquet.

Of Rosberg’s five victories, two came from eighth on the grid, two from fifth and one – his final win at Adelaide in 1985 – from third.

The absolute master of winning from bad starting positions, John Watson’s five victories came from all ends of the grid. He’d started from second when he took his maiden victory for Penske at Austria in 1976, and from there, his winning starting positions only got worse.

Watson went from fifth to first at Silverstone in 1981, 10th to first in the 1982 Belgian GP, and 17th to first at Detroit that same year. Then at Long Beach in 1983, he came from a staggering 22nd to win, the lowest grid position a race has ever been won from.

He did manage two poles in his career – one at Monaco in 1977 (which ended in retirement) and one in the 1978 French GP (where he finished fourth).

All four of Irvine’s wins came during his surprise season as a title contender in 1999. But despite the absence of teammate Michael Schumacher for much of the year, Irvine couldn’t manage to finish top of the timesheets on a Saturday, mainly because Mika Hakkinen was busy taking all the poles.

Dan Gurney was one of F1’s fastest drivers for much of the 1960s, as evidenced by the fact that his first pole position at the Nordschleife in 1962. He also took poles at Zandvoort and old Spa in 1964, but none of them translated into victories. He was close at Spa but ran out of fuel whilst leading with just a few laps to go.

Of his four wins, one came from sixth on this grid (his first F1 victory at the 1962 French GP) and three came from second, so winning from the front row was never a problem.

Surprisingly Bruce McLaren never managed a pole position in his F1 career – probably because he spent most of it racing increasingly uncompetitive Coopers and then going through the challenges of starting his own team (it’s called McLaren – you might have heard of it).

His first win in the 1959 US GP came from 10th on the grid; at the very next race (the 1960 Argentine GP) he won from an impressive 13th. McLaren started third before winning at Monaco in 1962, and his final win – six years later for his own team at Spa – was from sixth.

There are several drivers with three, two, and one win to their names who never did so from pole. One of those is Max Verstappen and with the way teams are performing at the moment, you’d think he might have a chance to get further up the list. As long as he can stop hitting other drivers, anyway.

But for now, the question is whether or not Ricciardo can go to the top before he does finally win from pole position. If (or surely when) that happens, I don’t think he’ll be too fussed at missing out on Hulme’s unusual record. 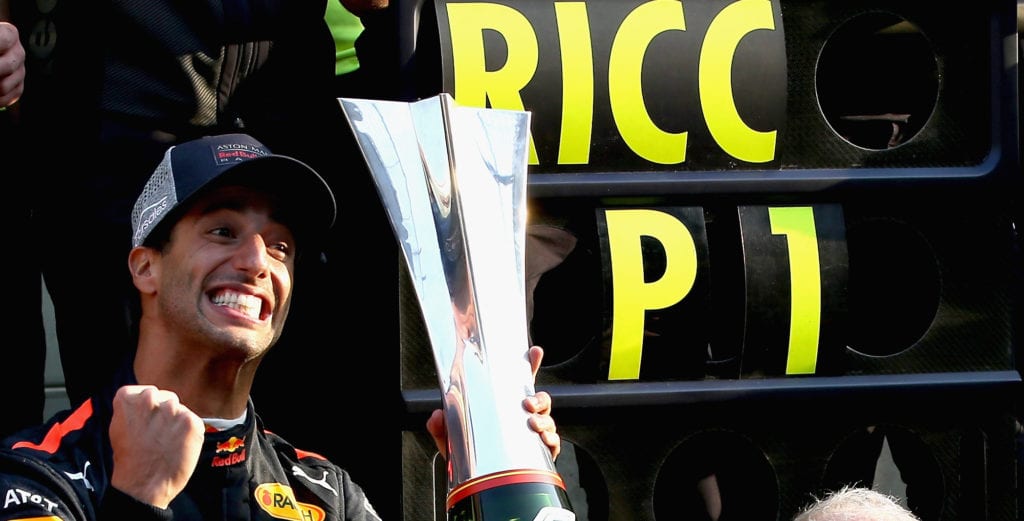