After retaining the lead at the start and controlling the race past his only pit stop, for a scary moment it looked as though the race might slip away from Ricciardo when he reported a loss of power over the team radio. Sebastian Vettel closed in and you wondered what would happen first – would he pass the ailing Red Bull before it finally broke down?

Incredibly, neither happened. Ricciardo worked out how to manage the issue for the next 50 laps and after the initial scare, he never really looked like he was going to lose the win. A late Virtual Safety Car period could have made things tricky, but if anything that only extended his advantage and his gap to Vettel at the finish was over seven seconds – pretty much the biggest it had been all race.

Lewis Hamilton finished a slightly dejected third, having struggled with his tyres for pretty much the entire distance. He came home ahead of Kimi Raikkonen and Valtteri Bottas, meaning the top five in the race was exactly the same as the top five on the grid which is… well, pretty much standard Monaco, isn’t it?

Best of the rest was Esteban Ocon, who drove an absolutely storming race. Not because sixth is his best result of the season, but because he was only a few seconds behind Bottas. He was the front of a train of four cars, each of which had good races, actually – Pierre Gasly seventh, Nico Hulkenberg eighth, and Max Verstappen – who actually managed to overtake quite a few cars – finished ninth. Given that there were no safety cars and very few retirements, that’s an impressive effort, but doesn’t change the fact that without his FP3 crash he could easily have been on the podium.

Fernando Alonso’s points streak came to an end when his gearbox gave up, and the other two retirements – and cause of the late VSC – were Charles Leclerc and Brendon Hartley. Leclerc was close behind the Toro Rosso coming out of the tunnel when his brakes failed and he ploughed into the back of the Kiwi – not the way he will have wanted his first home grand prix to have ended.

Still, at least when those guys were in the race they were having an alright time, something that couldn’t be said about the Williams drivers. Sergey Sirotkin’s impressive qualifying came to nothing as he was slapped with a stop-go penalty early on because his mechanics were working on the car for too long on the grid. Lance Stroll, on the other hand, suffered a couple of punctures and spent a lot of the race moaning about things and the team brought up the rear of the field.

For all of Ricciardo’s previous wins, featuring impeccable overtakes and daring lunges, this lights-to-flag win from pole is arguably his best because of the issues he was managing. Christian Horner compared it to the Michael Schumacher was stuck in fifth gear but still finished second – whilst probably not quite on that level (if there’s any track where you want a power issue, it’s Monaco) it’s still bloody impressive – and well deserved.

It also moves Ricciardo to third in the championship and means that he, Vettel, and Hamilton each have two wins this season. Could we be seeing the first signs of a three-way fight for the title? 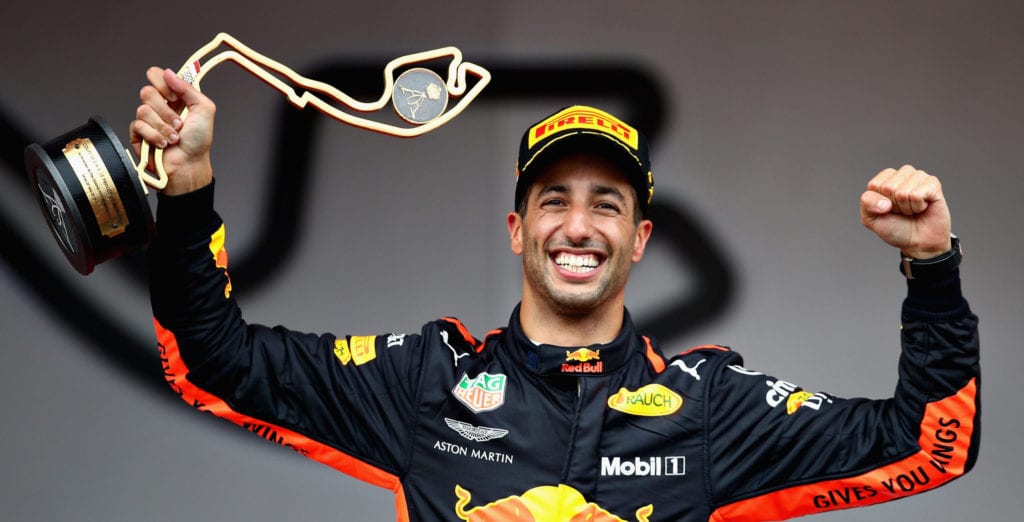