Ricciardo’s Epic Monza Overtake Reminded Us Of Something

The Australian driver’s fight through the field at Monza was undoubtedly one of the highlights of the race, and was even more impressive considering the track doesn’t suit the strengths of the RB13.

He started in 16th due to grid penalties for engine component and gearbox changes, and because pretty much half the field had grid drops too.

It took him a little while to get through the field and up the order, especially in the early laps on soft tyres, but Ricciardo was soon making up ground as others pitted.

He had great pace and was fifth when he pitted for super-softs, emerging behind Kimi Raikkonen’s Ferrari. With softer, fresher tyres, he was on the attack and we were incredibly excited.

We didn’t have long to wait for a pass, though, because Ricciardo quickly made a move into the first chicane and it was an absolutely awesome overtake. So, so late on the brakes and from really far back.

But, that overtake reminded us of something. We couldn’t think what it was, but then, we remembered. Ricciardo had basically completed the exact same overtake in 2014.

It was on Raikkonen’s Ferrari too! To make it even more of a coincidence… both incredible late overtakes into the first chicane at Monza.

What’s even funnier is we then remembered this pass from Ricciardo on Valtteri Bottas last year, into the exact same corner.

Ricciardo’s certainly had a lot of practice with these late overtakes into the first corner at Monza, and he put that to good use this weekend too. 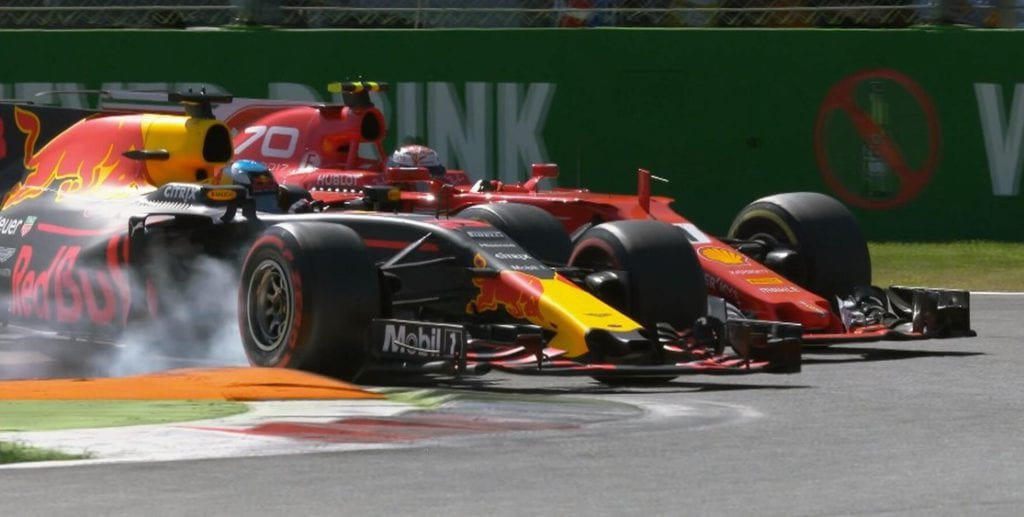