Ride Onboard With Ricciardo As He Tests An Aussie Supercar – WTF1
Skip to content
×
Formula 1 , Onboards , Touring Cars

Ride Onboard With Ricciardo As He Tests An Aussie Supercar

Supercars (it still feels weird not to call it V8 Supercars) is Australia’s biggest nation motorsport series. As part of a promotional event for Castrol, Ricciardo got to turn a few laps in the 620bhp-plus, V8-powered Kelly Racing Nissan Altima at Calder Park Raceway.

In case you missed the enormous grin on his face, Ricciardo also used words to descibe how much he enjoyed the experience:

“I didn’t have ear plugs, I probably should have worn ear plugs! But yeah, the upshift – pulling a stick feels good. A paddle is easy, it’s made my life easy as a racecar driver because I can’t heel-and-toe. But all that sort of stuff. The vibrations, it all just feels raw. The downshifting and banging it through and hearing it backfire. It was awesome.

“It was cool. They’re fast as well. It’s got some ponies.Coming onto the drag strip here where it was a bit slippery, that was my favourite part. It would always snap out a bit. That was fun.”

He also found the process of driving a big, heavy tin-top wildly different from an F1 car – a fact which should come as a surprise to precisely nobody:

“I wouldn’t say I got up to speed, but it took me a few laps to figure it out. When you’ve got so much aero you can brake right into the corner and then pick up the throttle early. There’s not much rolling time. But here, there’s a lot more rolling time here. It’s more in steps; you brake, ease off, roll, pick up the throttle. It’s more delicate, in a way. Just picking some apexes with all of the roll cage and all that. I couldn’t see much. I could see more out the front compared to an F1 car, but out the side it was trickier.”

Kelly got to sit in as passenger for a few laps which, for any driver, usually isn’t the most fun experience – not so with Kelly:

“Normally you sit next to a driver and critique them a little bit. For me, it definitely wasn’t the case; it was watching his inputs and learning from the way he went about it.He was very kind on the machinery, obviously, so shifting well and truly early and stuff like that, which was pretty nice of him.

“But to see the way he got in, went out, and did laps with me in the car with him, and then he stepped it up every single lap, just crept up on the brake markers and changed his inputs to improve every single lap, I mean, that’s why he’s the champion he is, and for me to sit next to him in the car and witness that firsthand was pretty special.”

So, Ricciardo to make a Supercars debut in future as a co-driver in one of the endurance events like Bathurst, then? Probably not any time soon – but we’d love to see it happen! 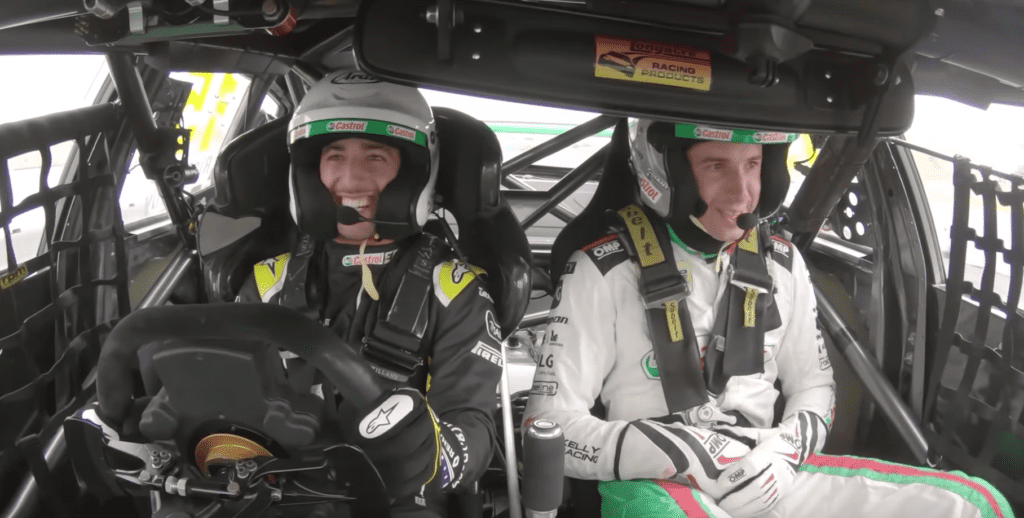