After Robert Wickens’ horrific accident at the same track this time last year, the last thing anyone wanted to see this year was another big one – and yet, that’s exactly what we got. Five drivers – Sato, Alexander Rossi, Ryan Hunter-Reay, James Hinchcliffe and Felix Rosenqvist – were involved, with Sato coming to a rest upside-down and Rosenqvist skating along the wall and bouncing off of the fence.

All drivers were OK (Rosenqvist was taken to hospital for checks but soon released) but, as a championship contender, Rossi had more than just a damaged car to be upset about.

After a 45-minute delay the race resumed, only to be shorted to 128 of the scheduled 200 laps when a storm hit the area. Will Power won his first race of the year ahead of Scott Dixon and Simon Pagenaud.

As for Rossi, the team repaired his car and sent him back out in the hope of picking up some extra points but straight after the crash, he knew exactly where he wanted to place the blame:

“I’ve seen a replay and I saw it in person. Obviously I didn’t get a good start, and that’s on me, but we were three-wide with Ryan on the inside, I was in the middle with Takuma on the outside. I can’t even believe to understand after last year how Takuma thinks any sort of driving like that is acceptable. To turn across two cars at that speed at that corner, in a 500-mile race is disgraceful and upsetting. It might have cost me this championship.”

Sato’s initial assessment was that he thought he’d completed the pass when the accident happened:

“I feel sorry for the guys. Ryan and I were obviously racing [out of] Turn 1, and it looks like Alexander had a slow start and we went left and right. I thought I was clear, and unfortunately we got together.”

“I thought I was clear”. That kinda sounds like an admission that he may have been responsible for the accident but he later took to Twitter to explain why he didn’t think it was his fault:

I feel I need to say a word. I’m sorry I was involved with @AlexanderRossi for the championship. Looks like he was squeezed both Ryan and I, and if you reference seams, Alex clearly moved up. We all racing very close and unfortunately we made contact. pic.twitter.com/falLL7tf49

Rossi wasn’t having any of it:

I think you’ll find that if you watch the video, it was you moving down trying to get ole Scotty D’s tow which caused this whole situation. 🤦🏻‍♂️🤷🏻‍♂️ #tryagain https://t.co/nc2lP4bFtG

From all of the video footage shown at the time, Sato did indeed look bang to rights and it’s understandable why many deemed him to be at fault – Paul Tracy even called for a race suspension for Sato and suggested that IndyCar needs to hand out more penalties to prevent things like this happening in future.

However, Sato’s response was to return to Twitter with his own onboard footage – the missing piece of the puzzle, if you like – which, in his opinion, absolves him of any blame:

I didn’t mean I was blaming Alex at all. I just said the facts and I apologized for the situation on my previous tweet. Now I show you this as well that I just drove straight. pic.twitter.com/Md0U71S8y1

Yeesh… it’s a tough one to call. His wheel does appear to be largely straight but, with the staggered IndyCar oval setup, holding the wheel straight will mean the car actually moves slightly left. When alongside Rossi, Sato does appear to briefly turn the wheel ever so slightly left, but when you look at camera footage frame by frame it’s easy to see things which aren’t really there and almost certainly aren’t conscious decisions; for instance, just check out how much the wheel moves around before he even passes Rossi.

A few other current and former drivers also weighed in on the incident with many laying the blame at Sato’s door.

Certainly looks to be Sato’s fault after looking at it more. Shame, ended a lot of good guys days in one corner. https://t.co/aj9bOKSDpn

Thank god all involved walked away from the big one today. Totally unnecessary on Lap 1 of a 500 mile race. Had a good start, was moving past Alex for P5 driving straight (on the straight) then all of a sudden I’m backwards in the wall. 🤬

Who thinks driver penalties have gotten too weak ?? Myself , zanardi got 50k fines points , I even sat out the 1st race of 2000 . Thoughts ?

Well said @AlexanderRossi regarding driving standard and I totally agree with @paultracy3 on the penalty.#norespect

My opinion? It’s worth nothing, but I’ll give one anyway. This was a bad accident caused by drivers heading three-wide into a corner at over 220mph. Sato could have used more of the space on the right, Rossi was in the middle and had nowhere to go, and Hunter-Reay on the inside probably wouldn’t have known that Sato was on the outside, otherwise he might have left a bit more room. This exactly is the sort of situation driver spotters are supposed to help prevent – for whatever reason, that wasn’t the case at Pocono.

Were it different drivers at a different circuit, it might not have been such an event. But because it involved Sato (a guy with a reputation for aggression) and Rossi (a championship contender) at Pocono (a track which, one year ago, left Robert Wickens a paraplegic and is coming under criticism for its safety standards), emotions are understandably running high.

However, it is worth saying that IndyCar has a guideline for oval racing that the last car to enter a battle has a responsibility to do so safely, has to leave room for the others, and should be the first to back out if the situation looks sketchy. Sato arguably didn’t do that and has to bear the responsibility

I actually feel a bit for him – there’s nothing wrong with going for a pass on the first lap of a race and yet, despite making a small but significant error in judgement, many of the comments he’s receiving from fans on social media fall somewhere between grossly unfair and simply gross. He was probably the most to blame for the incident, yes, but there are too many other factors at play to say he was being overtly dangerous and deserves a ban, or anything like that. IndyCar certainly hasn’t seen fit to issue any penalties. 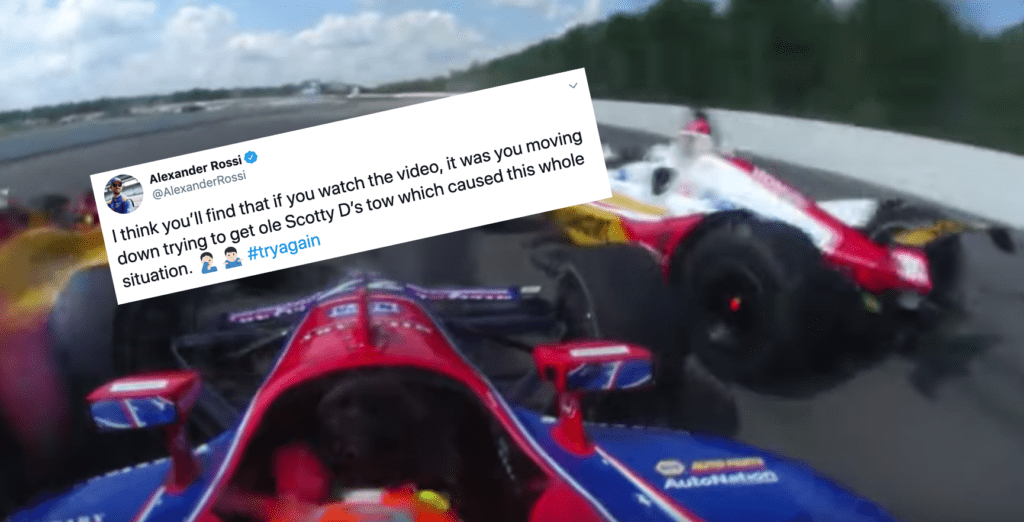