Schumacher’s Pole Lap For The First Malaysian GP Was All Kinds Of Amazing – WTF1
Skip to content
×
Formula 1 , Onboards

When Michael Schumacher broke his leg at the 1999 British Grand Prix he was expected to be out for the rest of the season. However, rumour has it that when Luca di Montezemolo phoned him up at home the week before the Malaysian Grand Prix, Schumacher’s daughter let slip that he’d been out playing football and he was ordered to return to duty.

Schumacher apparently had no interest in coming back as the number two driver and aiding Eddie Irvine’s title bid. He felt he deserved to be the one taking Ferrari to championship glory having put in all the hard work.

But whilst Schumacher would dutifully help his teammate in the race, qualifying was a different matter. Keen to show he was the true Ferrari number one (as if he needed to) he took pole by nearly a whole second from Irvine with this magnificent lap.

It’s incredible just how many corrections he has to make with the steering, but that controlled slide through turns seven and eight is just glorious!

In the race he continued to be way faster than anyone despite running a heavier fuel load. Embarrassingly for Irvine, Schumacher had to let him past not once, but twice. Ouch… 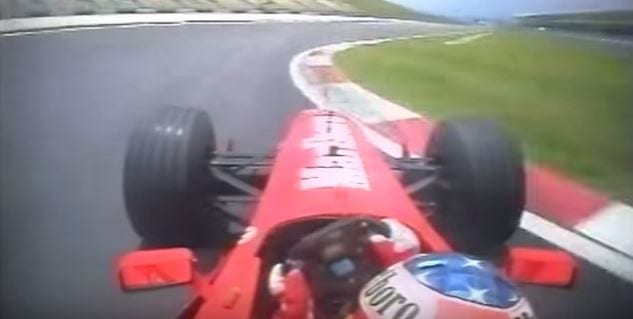