Sean Gelael brought out the red flags during the F2 qualifying when his car stopped on track with a problem. As a group of marshals started to push him out of the way, Gelael managed to bump start the car. This caught the two marshals pushing at the side of the car off guard and they both stumbled and fell, being knocked by the rear wheels along the way.

Thankfully the whole thing happened at very low speed and both marshals got up instantly, seemingly uninjured, but it’s easy to imagine how it could have been much worse – just look at what happened to the Ferrari mechanic who got knocked over during a pit stop in Bahrain last year.

Although restarting the car allowed Gelael to get back to the pits and potentially take part in the rest of qualifying, stewards prevented him from doing so and then later disqualified him from the entire session for creating a “dangerous situation” for the marshals. Not that the disqualification really made much difference – Gelael hadn’t set any lap times so was due to start last on the grid anyway.

Yikes… Sean Gelael grinds to a halt between Turns 7 and 8 and one of his brakes gets a little too hot to handle 🔥#AzerbaijanGP 🇦🇿 #F2 pic.twitter.com/l75ivAa8oA

While Gelael may be the last driver on the grid, there will be one driver starting behind him. Mahaveer Raghunathan already had a 10-place penalty for completing too many laps in Bahrain, and after missing a call to the weighbridge in free practice in Baku had that penalty upped to having to start from the pit lane.

He also had an amusing moment during practice when he ran down an escape road and tried to turn around, doing a 400-point-turn in the process as his engine started to overheat.

To make matters worse, a team member was later heard explaining to him that he needs to turn the steering wheel while driving backwards and forwards in order to turn the car around. Yeesh.

Throw in the F1 dramas of the cancellation of FP1 and two red flags during FP2 and you’ve one absolutely bonkers day of action – or by Baku standards, business as usual! 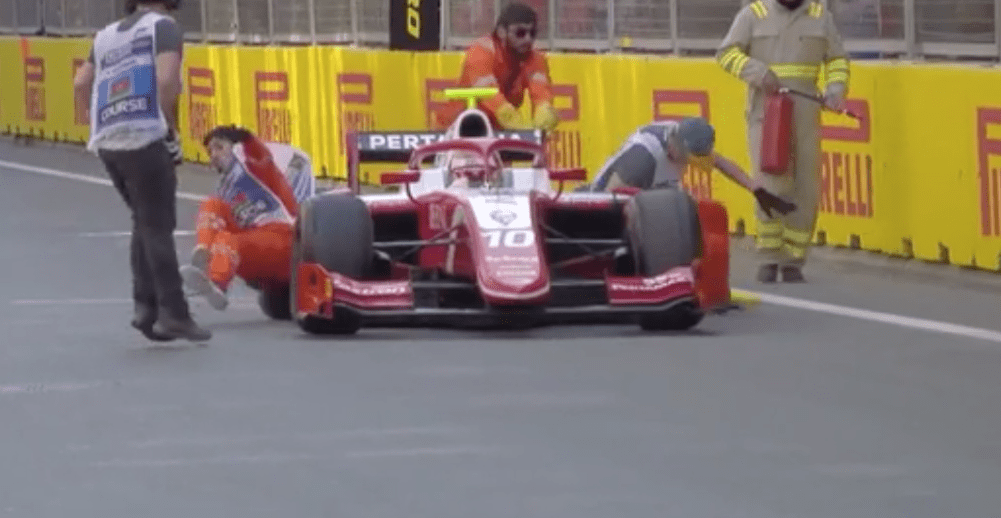